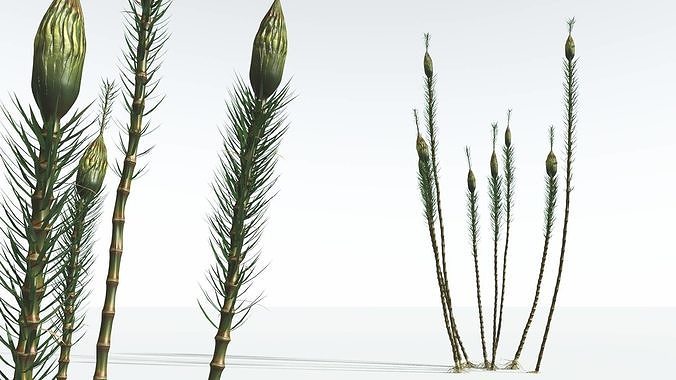 Habitat: Extinct tree-sized plant from the Carboniferous to the early Permian Period (about 360 to 250 million years ago). It appears to have preferred sandy riverbanks and floodplains. It appeared mainly as part of the sub-story of prehistoric forests.

Notes: An extinct, tree-sized plants that lived during the Carboniferous and early Permian periods (about 360 to 250 million years ago) to which the modern horsetails (genus Equisetum) are closely related. Unlike their herbaceous modern counterparts, these plants were medium-sized trees which grew to heights of more than 10 meters. Although it's stem was woody, it was nonetheless a delicate plant that grew in the sub-story of prehistoric forests. Several sub-genera of Calamites existed, this species fell into the category Stylocalamites and were distinct from other Calamites in that their terrestrial parts rarely branched and had only limited foliage. It featured a prominent strobilus missing in other sub-genera of Calamites, but is a feature found in modern horsetails. These plants grew from an underground connected network of rhizomes as well as from seeds.