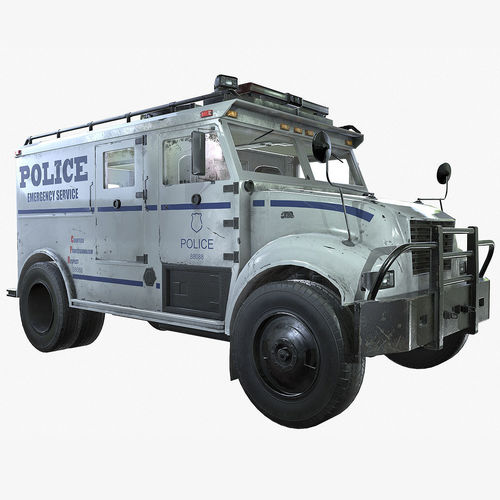 GAME READY SWAT Truck, similar to an NYPD Police Truck. Comes equipped with both interior and exterior textures. Multiple file types are also included in the .zip file so you can open this in just about any 3d program or game engine. Model is rigged with pivots in the right logical locations.

Normal maps were baked from a high poly model.

Includes the following PBR texture types (BOTH Metalness and Specular, perfect for Unity, Cryengine and UE4):

Note about textures. The Normal maps are -y, this is fine for directx. If they look flipped, just highlight the green channel in photoshop and hit ctrl+i. If the roughness and metalness look too shiny in say, UE4, you'll have to make sure they are set to linear. Just double click the texture and uncheck the sRGB box. You can also fix that by combining maps in an image editor like Photoshop.

UV's are mostly flat with a few pieces overlapping where necessary.

Please click on my Username for more Game-Ready models!