Nicole Ridgwell: from acting and music to animation and creating VR film

Could you, please, briefly introduce yourself.

My name’s Nicole, I’m a CG character animator with a background in music. I just finished working on Raising a Rukus, a VR film at The Third Floor, that was released March 27. I've also animated at Penrose VR, Nickelodeon, and did both Disney and Pixar’s summer animation internships while I was a student at Academy of Art University. In my spare time I’ve been working on my own indie short films and TV shows, and playing music in my band.

Before switching to animation, I worked as an actress and musician specializing in children's entertainment and live performance. I've taught privately, at music schools, preschool programs, and I have been performing live and touring since I was a kid. 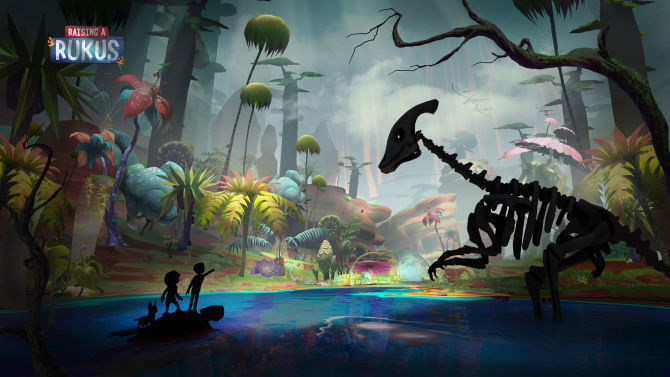 When did you get interested in animation and started this? When did you realize that animation is the thing you want to do for living?

I grew up in the backwoods of Tahoe National forest in Northern California. My family lived in trailer with no electricity until I was around 12, so I had very little access to TV or movies unless I was visiting my dad. I spent most of my free time playing music and painting with drugstore watercolor sets. So when we moved to town and I could finally watch cartoons, I was enthralled and couldn’t get enough. I loved Anime, Loony Toons, Disney movies, anything I could get my hands on. I didn’t know what being an animator was at the time, but I knew that I loved animation from the moment I set eyes on it. It wasn’t until I moved to San Francisco and was well established in my music career that I started sneaking into the local art school’s figure drawing classes with a friend. I applied on a whim and was offered a scholarship. Who can turn down free education?

What personal traits have helped you the most in your job as animator?

As any kind of artist, it’s important to be confident and not be afraid of your own aesthetic, which is something I’m only now realizing I have. I guess it took me a while to learn the basics before I found my style. If your work is true to you and your interests, it will stand apart from the rest and feel unique, which helps your demo reel stand out to recruiters and companies. Having a strong work ethic and the ability to take critique is important for working in the studio environment. It’s good to have a thick skin because you’re always going to get lots of notes and changes, no matter how good you get. But I think the most important trait that has helped me in my career is not giving up. I can’t tell you how many times I’ve felt like a complete failure (both in music and in animation), but I always try again. Most recently it was when I pitched at Nickelodeon and they rejected my show. I sulked for a bit, then picked myself up and got back to work. Rejection just means you gotta work harder.

You were on the internship in "Walt Disney", „Pixar“, worked for "Nickelodeon" and "Penrose". Which experience was the most valuable for you? What did you learn there? How they are different?

At the Disney and Pixar internships I was learning how to work in the studio environment just as much as I was learning how to animate. Taking direction, hitting deadlines, how to behave professionally and work with a team, that kind of stuff. Creatively, if I had to grossly generalize, I’d say I learned more posing/appeal at Disney and timing/acting at Pixar. Once I graduated and started working full-time at Nick I got way faster, and was inspired to create my own content after watching co-workers pitch their shows. The last few jobs I’ve had have been in VR at Penrose and The Third Floor. Working in VR is like learning to animate all over again, and it’s an interesting challenge. Staging and directing the audience’s eyes have become the focus, since there’s no camera frame in VR. I’ve found that I have to pay much more attention to things like weight as well in VR. I also really want to make my own short film in VR. I think that would be so fun.

Among your work, a lot of character sketches and 2D animations, how and why did you move to 3D? What was/is the most difficult about this shift?

When I went to art school, I didn’t know anything about 3D animation and thought animators drew everything. I was told by a teacher that traditional animation jobs were becoming obsolete so I switched to 3D despite barely knowing how to use a computer. Fortunately I had some amazing teachers who worked at Pixar and I fell in love with the medium. 2D or 3D, the principles are all the same, and my drawing skills helped with appeal and posing. Coming from a performance background it was the perfect fit for me. Recently I’ve been learning to storyboard which is super fun. 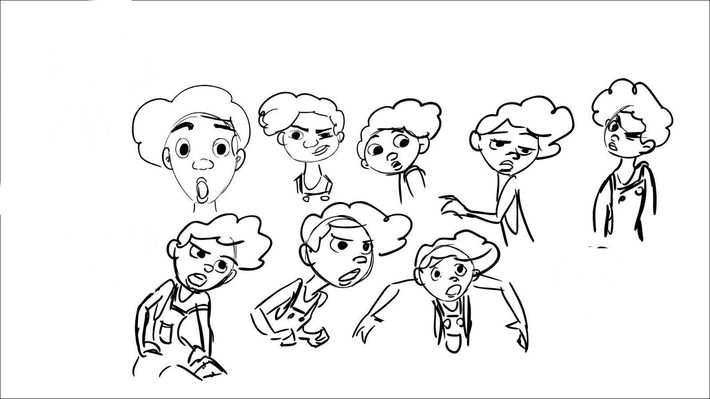 Have you ever used stock 3D models and worked from there? Why?

Nope. I always used pre-rigged free characters like Norman or Malcolm. I don't mess with rigging unless it’s something simple like adding a control to a prop. However I always modify my rigs rig so my characters look unique, and sometimes I’ll use stock 3D models and wrap deform their props or costumes to my rig so I don’t have to model stuff. And I’ll use stock models to build a background if image planes don’t cut it or if the character has to interact with their environment. Which is always a good idea. There’s nothing more boring than a test shot of a character just talking at the screen.

Where do you see yourself in 10 years? What is your dream project or company to work for?

I’d like to make my own TV show or movie about music. The company is less important to me then the people I’m working with and the product we’re working on. Hopefully I’ll be working with my friends on amazing content!

What would you advice for young 3D designers considering shifting to animation?

Put yourself in the right location to succeed. You may need to move, or switch schools, or seek out an online workshop, or find a mentorship. You have to go way above and beyond a normal art school curriculum. But if you work super hard and find the right teachers, you can make it happen. The best thing you can do for yourself is learn from a professional who’s working in the industry you want to join. Not only will you learn the right skills but the class could potentially connect you to a network of people who will eventually help you get jobs.

Once you find the right learning environment, DON’T MESS IT UP. Your reputation is all you have and if you ruin it by being lazy or a jerk, your career will be over. The industry is small and people don’t forget. 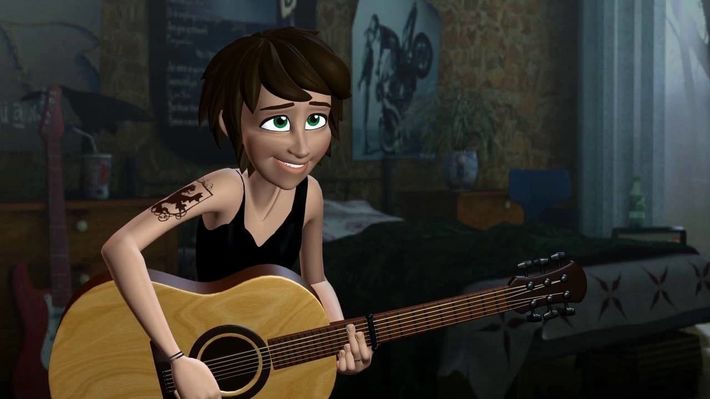 When animating, be specific with the characters you create. Pick people you know or personalities you like to draw inspiration from. I keep a list of characters I interact with and situations I encounter in my life so that when I’m strapped for ideas I have some great stuff to fall back on. The world is a beautiful, crazy, hilarious place filled with prime animation inspiration, take advantage of it! Next time you’re at the bluegrass festival and you see the funny dancing hippie guy, don’t just laugh and continue to drink your PBR. Grab your sketchbook and remember him for later!

Last tip: Once you land your first gig, remember not to stress too much and have fun with your co-workers. Nobody wants to work with a stress-ball and you’re making cartoons! Cartoons are awesome and so are you. Make new friends and enjoy the ride. :) 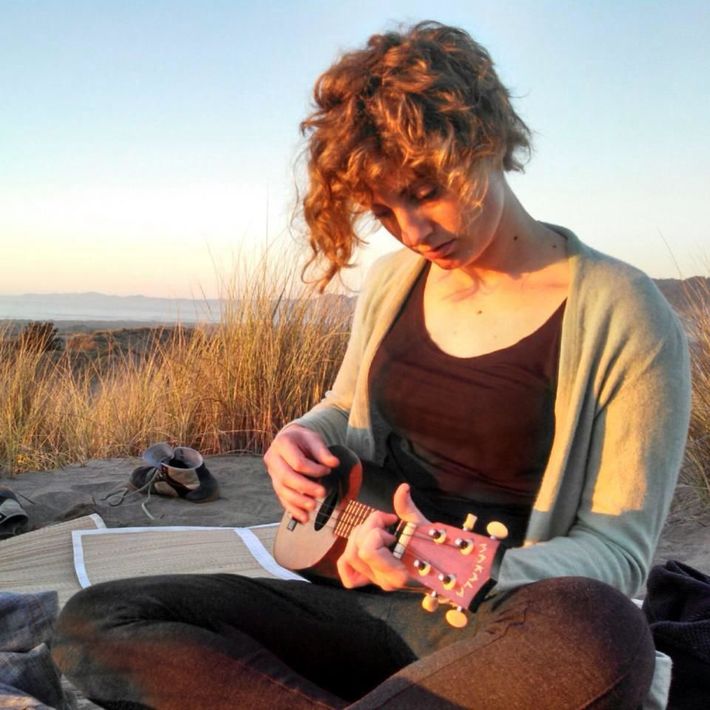