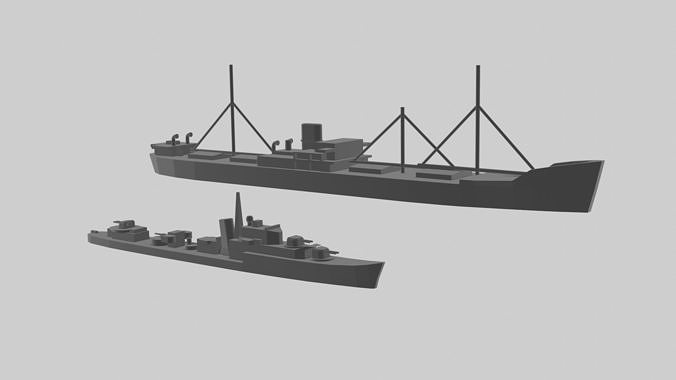 Note: This offer is a bundle consisting out of two models. I only combined them for the thumbnail shot, the models themselves are seperate, yet scaled the same. The destroyer is called J, the merchant is called modern british freighter.

The battle of the Atlantic saw the British Navy as one of the main targets, with the merchant supply routes being under constant attack by german submarines and aircraft. Convoys had to be guarded by units of the Royal Navy, most of the time being destroyers. Britain used dozens of classes to protect their lifeline to the US, one of these classes being the J-class.

The J, K and N-class of destroyers were classes built by the Royal Navy prior to WW2 and saw heavy usage against both the german Kriegsmarine and the Imperial Japanese Navy. The first units were laid down in 1937, with the last ones being completed in 1942. They served not only in the Royal Navy, but also the Royal Australian Navy, Dutch Navy and the Polish Navy. Overall 24 units were built, with only 10 being sold for scrap in the late 40s and 50s. All of the remaining ships were either sunk in battle, scuttled or were so heavily damaged that they were written off. The destroyers of this type featured a balanced amount of firepower, mobility and endurance, some withstood impressive amounts of damage. Overall they were smaller and relied on accompanying ships than their predecessor, yet they proved themselves capable in combat.

Merchants were the main target in the battle of the atlantic, the merchant in this bundle is a modern british freighter, however isnt a specific class or ship. The detail on the model isnt as high as I would have liked it to be, but it is enough to be recognizeable. Since there isnt an actual name from the ship, I modelled it only according to my feelings, meaning that the scale can be off in several dimensions.

Note: This bundle is recommended to be used in the 1/3000 scale. The models themselves arent scaled, the scale table is down below. Please Note that the dimensions for the merchant are only guesswork.

For self calculation: I guessed for the merchant to be 150m or 492 feet long.

The models are intended to be used with little supports as possible, yet some are recommended below the barrels on the main and secondary guns.

Warning: Due to the small printing size of the destroyer, fix the bow and stern onto a solid surface after printing. Since the material isnt thick, the model tends to warp heavily over time.

to Battle of the Atlantic- British Convoy Bundle