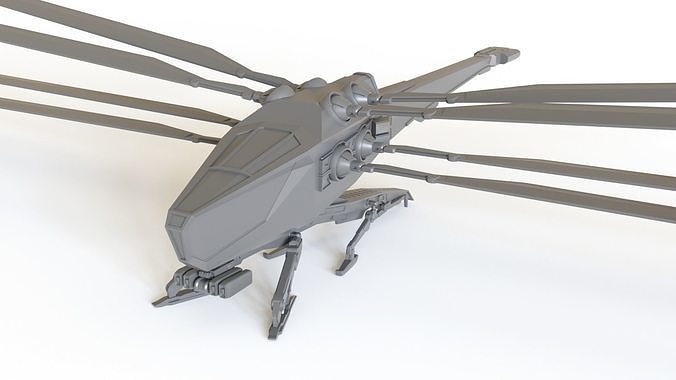 UPDATE 1.2: Added connector to the hull's halves, fixed scale on the wing's ball and socket

3D model of an Arrakis Ornithopter created in Blender 2.93. Inspired by the Atreides Thopter depicted in Dune 2021. Perfect for 3D print.

Available in the following file formats:

Let me know if there are problems with the model or suggestions to improve it in any way possible. That would be really appreciated :) Hope you like it! Don't forget to rate and check my other models!

Write comment
Item rating
4 0
Recommended
Recommended
Recommended
Not at all suitable for FDM 3d printing without major modification. Perhaps would be viable on an SLA (resin) printer, but I feel like even that would require bringing the model into a 3d program to make some modifications. Its a decent model, but just be prepared to put in some work to get a good print out of it. A few improvements that could be made: - Separate each part into its own STL. Having one mesh for each individual part would make this much more convenient to work with in a slicer. - Key the 2 halves of the main hull so that gluing is easier and more precise - Fix the wing attachments. The ball and socket for the wings is not sized well, it is too loose and would need to be glued statically in place rather than left as a friction joint that can be articulated - Increase the scale. The model is extremely small when imported directly into a slicer... had to increase scale by 400% just to get something that my FDM would have a chance at printing at all
Recommended
Dune Ornithopter
$28.00
Save with CGTrader Credits
Royalty Free License
My PurchasesProceed to Checkout
Dune Ornithopter
$28.00
Save with CGTrader Credits
Royalty Free License
My PurchasesProceed to Checkout
G