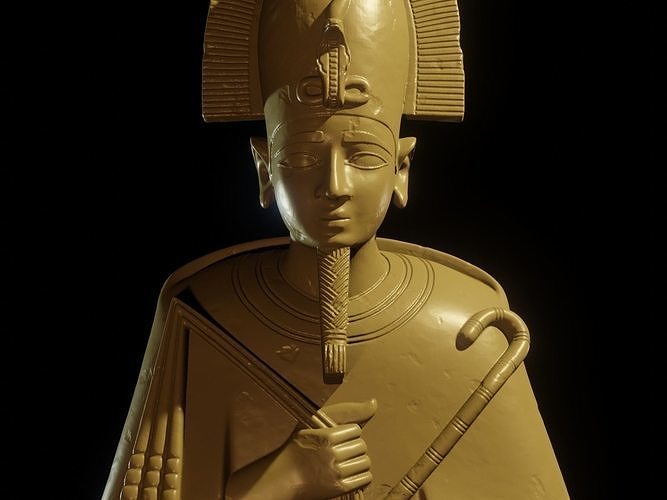 Osiris is the Egyptian Lord of the Underworld and Judge of the Dead, brother-husband to Isis, and one of the most important gods of ancient Egypt. The name `Osiris' is the Latinized form of the Egyptian Usir which is interpreted as 'powerful' or 'mighty'.

He is the first-born of the gods Geb (earth) and Nut (sky) shortly after the creation of the world, was murdered by his younger brother Set, and brought back to life by his sister-wife Isis. This myth, and the gods involved, became central to Egyptian culture and religious life. Osiris was originally a fertility god, possibly from Syria (though this claim is contested) who became so popular he absorbed the function of earlier gods such as Andjeti and Khentiamenti, two gods of fertility and agriculture worshipped at Abydos. He is associated with the djed symbol and is often depicted with black or green skin symbolizing the fertile mud of the Nile and regeneration. He is also frequently shown as a mummy or in partially mummified form in his role as Judge of the Dead.

Images of Osiris as a living god depict him as a handsome man in royal dress wearing the crown of Upper Egypt as a plumed headdress known as the atef and carrying the crook and flail, symbols of kingship. He is associated with the mythical Bennu bird (inspiration for the Greek Phoenix) who rises to life from the ashes. Osiris was known by many names but chiefly as Wennefer, The Beautiful One and, in his role as Judge of the Dead, Khentiamenti, The Foremost of the Westerners. The west was associated with death and 'westerners' became synonymous with those who had passed on to the afterlife.

He was also known as The Lord of Love, King of the Living, and Eternal Lord. After Isis, Osiris was the most popular and enduring of all the Egyptian gods. His worship spanned thousands of years from shortly before the Early Dynastic Period (c. 3150-2613 BCE) to the Ptolemaic Dynasty (323-30 BCE), the last dynasty to rule Egypt before the coming of Rome. It is also possible that Osiris was worshipped in some form in the Predynastic Period of Egypt (c. 6000-3150 BCE) and probable that he originated at that time.