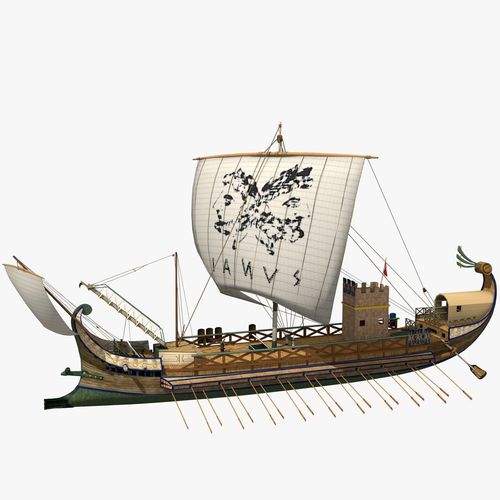 This model is externally equal to a much complete version present on this Site that includes interior arrangements.

The present model version infact does not include inside frames,oars teams and inside deck and banks. To be closer to a Lowpoly model and be suitable for videogames too, some Object has been in some way simplified and Texture Images dimensions have been reduced in respect to the complete version, but to a limit such not too excessively disturb details visibility.

The present model, about 33 m long, is a reproduction in scale of the most common roman war ship. Original paints and mosaics reproducing a similar boat can be found in Pompei, Italy, and in many museums such as the Bardo in Tunis. She was in use during Republican and Empire Period, from some century before to some century after J.C.

The ship was powered by one and seldom two sails and by around 40 men at the oars, such figure depending on the hull total lenght. Rowers, mainly slaves or captives, sitted on two layers and necessitated of special side boxes to hold oars, due to the very limited width of the hull. This ship was relatively small but the strong team at the oars gave her an high speed and the capacity to go against the wind. She was equipped with a fast lowering mobile bridge, with hooks to branch enemy vessels and with a very powerful submerged bronze rostrum to open dangerous water ways to their hull, sinking them. Rudders, one on each side, were side positioned and directly activated The anchor was a wooden one, but typical lead counterweights were present to make it efficient and stronger.