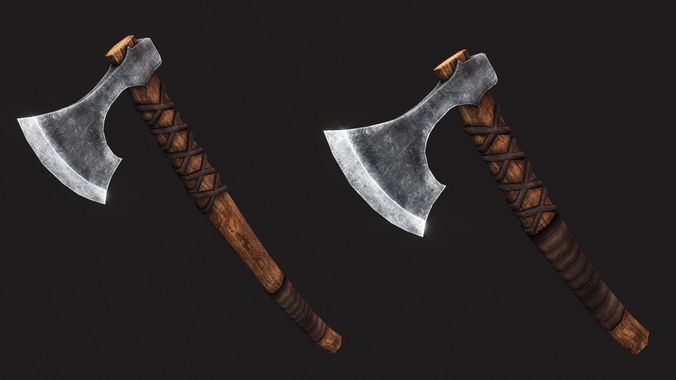 Textures is created using Photoshop, and has a Diffuse, Normal & Specular to its base.

Work around with its material, and you can easy find the right settings for it.

The Baltic 'Braveheart' Viking Axe is a historical replica of axes made around the 7th-9th centuries in the Baltic lands. The blade is a laminated, bearded design, and fitted to a sweeping, curved handle, with four lugs to ensure a secure hold on the handle. The grip of the handle is wrapped in tanned leather, embedded into the handle. The leather is wrapped near the blade as well, for better grip there. The beard allows the user to choke up on the handle for controlled strokes while crafting or as a shield disarming action used in reenacting. This is a one handed weapon that was likely used in place of the sword, being easier to craft and more versatile around the camp and woods or as a back up to the spear. The Baltic 'Braveheart' Viking Axe is considered ‘battle ready’ and should be handled with extreme caution due to its sharpened blade.