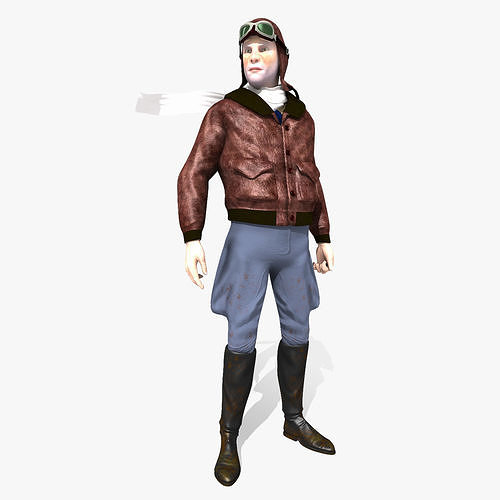 This model comes with several pre-animated scenes to get you started: Flyboy_Zero-Scarf (base T-Pose and Rigged Scene) Flyboy_StartWalk-scarf Flyboy_Pose-Scarf_02

I don’t like to have too many control objects in my rigs, I like them simple and so I try to access the bones directly as often as possible. you can remove or add to the control objects I have placed on the rig.

The eyes have bone control for position or you can use the Eye morphs to control position.

The Scarf and helmet are optional (their visibility can be turned on or off as desired).

The scarf has 2 morph targets that lower the left and right corners (below the chin) so that when the head is rotated, you can move the scarf out of the way). The scarf is also rigged so that you can position it and let it flap in the breeze.

The helmet also has two morph targets - these move the goggles into 2 different positions on the forehead. The helmet is also rigged so that you can position the flaps and straps as you rotate the head.

But if you have positioned the model by moving the bones, AND you try to use some morph targets, you may have some pretty weird distortions that will freak you out.

Don't panic, the solution is to 'zero' out your bone positions, as or just before you apply the 'Morph' targets.

MAX (Max counts the polys and verticies of the object and all of it’s morphs into the total)+ Man,Helmit and Goggles, Scarf, Ground 16955 verticies