Making of «Another Sky»

Making of «Another Sky»

Tutorial posted over 5 years ago
by

Hello to everybody! My name is Alexandr Novitskiy and I do modeling and visualization. I’m also an instructor at the CGTarian Online School. Today we will talk about airplanes. I am a lover of aviation theme of the First Great Air War, so the choice fell on the plane Pfalz DIII (DIII because of Mercedes DIII engine on board). To create the work I used the following software: Maya, 3D's Max, Unfold 3D, Mari, Vray 3.0 (with 3D’s Max), Photoshop. In fact, this list can change, most importantly in this matter - understanding of the key moments, and with which soft you will path through them - not so important.

I think this is the most important step. Originally I wanted to show the airplane in conditions of war, show dirt and gloom on the ground in contrast to the vast of light and hope in the sky. In the home setting plane will be perceived correctly. It may reveal itself as the aircraft at the sky. Paint scheme belongs to a real Ace. Also I decided not to use the standard paint scheme so is not to depersonalize plane and give it a character.

Initially, by the way, I was not planning to model it completely, but in the end, got carried away. Idea of knights of the sky is very inspiring. It was a time of honor and dignity. No parachutes, no exceptions. Only keying machine guns and trusty steed. Only pilot and steel the bird with its own spirit.

This is the most time-consuming process, as the model was created in great detail. In fact the aircraft of the First Great Air War is very delicious theme. Photos with searching materials are rare. Many airplanes of that time (every fifth or close to this figure) were assembled little bit different with changes in design. So the main task was not to find many photos with Pfalz DIII but to find a series of references with particular instance. Also I learned a lot of technical documentation to understand meanings of many details. It’s important to understand the whole design. Rather, that's why I did not stop on creating of visible items only, and went further with whole engine, machine-guns and cockpit.

Images below shows how was developed a form of aircraft. First of all were created sections and basing on them I made a simple body mesh. 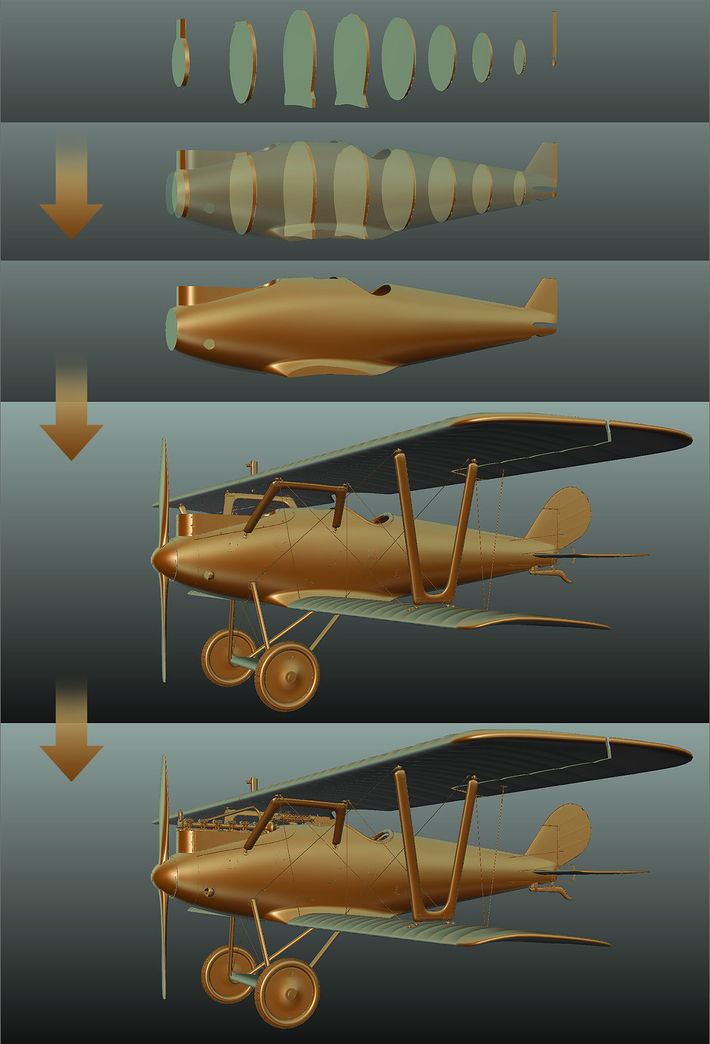 Then came the development of certain forms, the study of various parts and so on. In this work I had to devote enough time to details, as they play a significant role in the final result.

Important: create each new group of objects in a separate group that through formal logic can be easily understood and that is where. It’s really important and doesn’t matter in which software do you work – max or maya. Use layers, if it will help facilitate the work, but if we talk about the Maya, it is enough to be competent to sort the objects in the outliner. Do not hesitate to name every detail - the less unnamed objects in the scene you have, the better. For example: if we called a wing «wing», we should call the child element «wing_element», etc. This is necessary to avoid confusion and do hundreds of groups. In one scene must be one logic in naming objects, otherwise again the same will be a mess. Also with such a scene is always more comfortable to operate, more comfortable to texture in Mari, and in general, it’s simply more accurate. 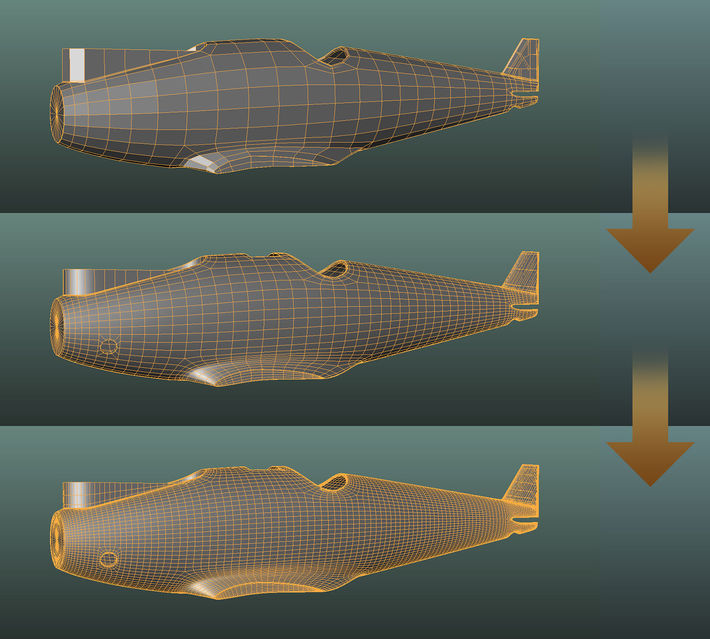 First of all, was developed basic form, which eventually was smoothed to obtain the required number of polygons to continue its detailing. As a result, almost all objects have been created for smooth, which was re-applied to them at the end to obtain the most beautiful results after completion. 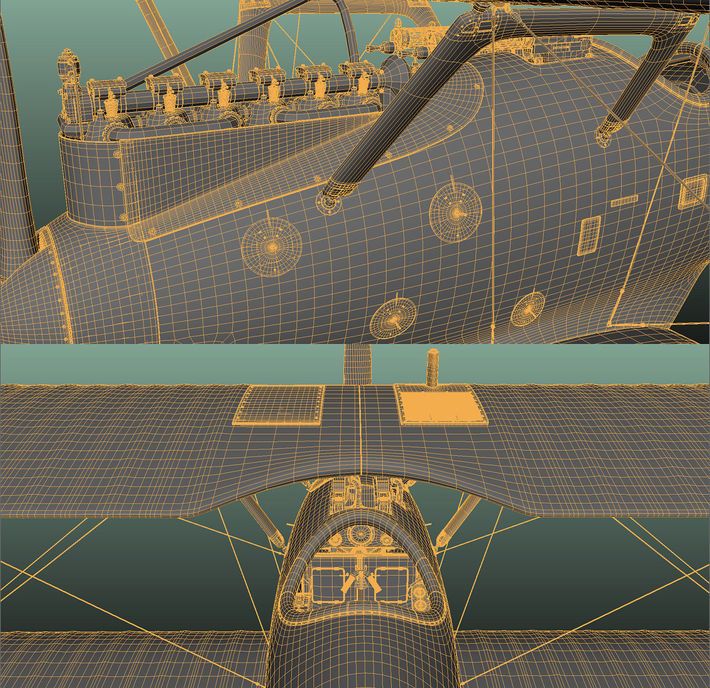 The wireframe of this kind is important uniform density, accuracy and brevity. Clearer than the mesh, the better the user experience with it. 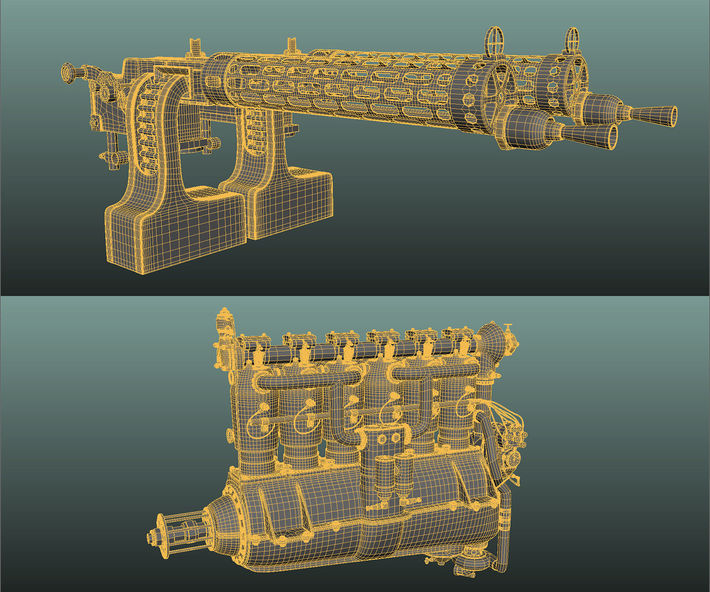 Important: when you are going to apply smooth, UV unwrapping should be made after smoothing, if your mesh has a lot of places with insufficient polygons. Otherwise after applying smooth, texture can be pulled. It’s may not be good if you’re trying to reach the best result. 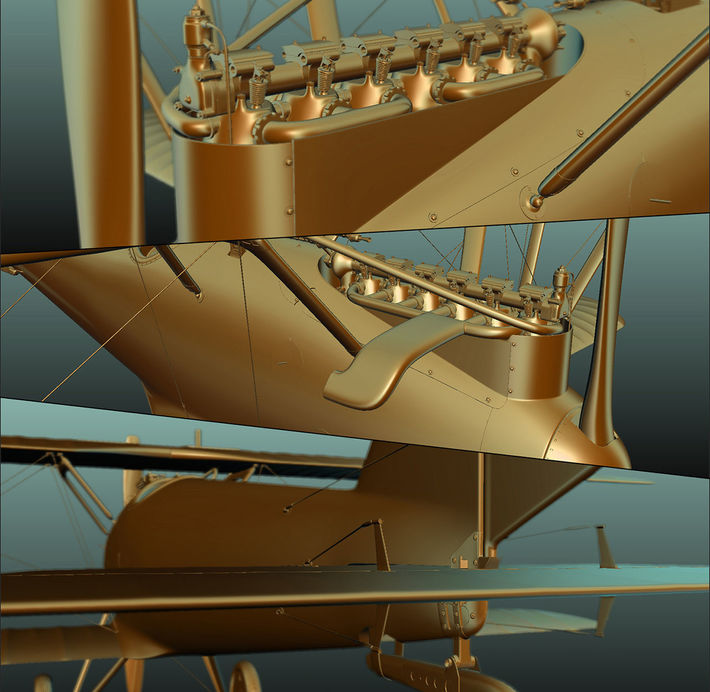 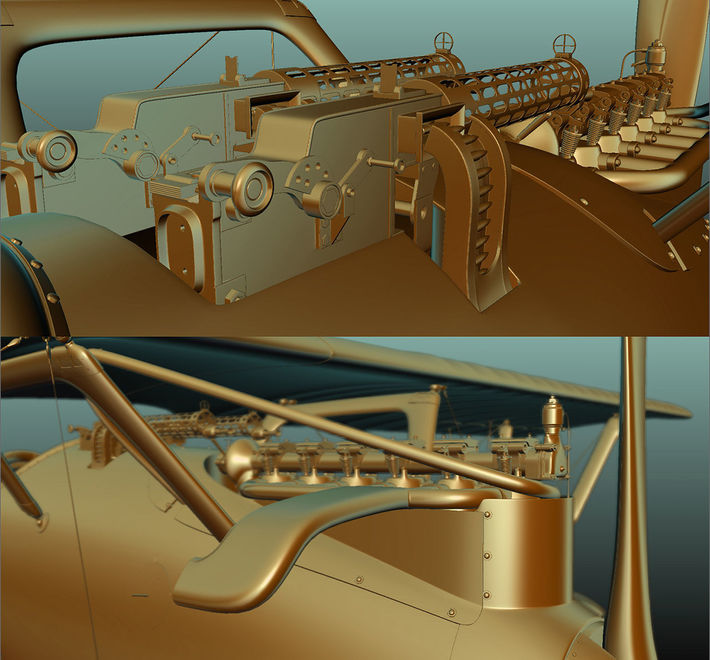 Also, you should always remember about tests with reflections at different stages of creating the model. HDRI always helps to catch the problem areas in the bud, as well as a properly configured base modeling material. 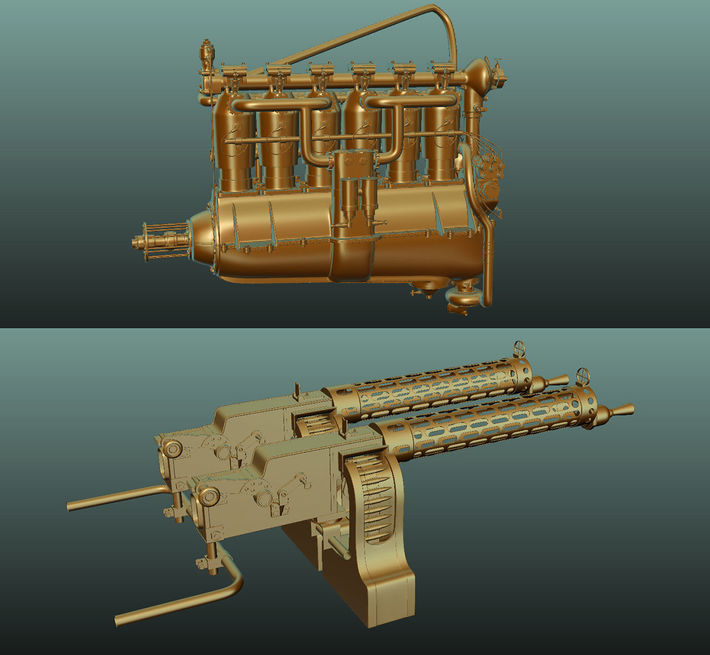 Engine, machine guns and cockpit are simpler than the airplane’s body and child elements to it, but it has a lot of small objects and a lot of nuances. But unwrapping here much more easier and can be made directly in Maya. 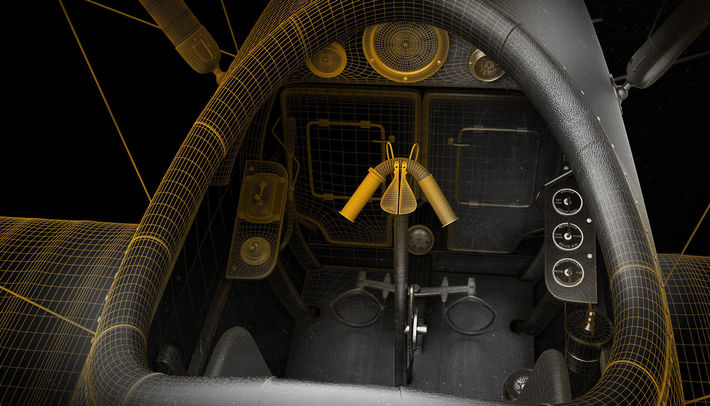 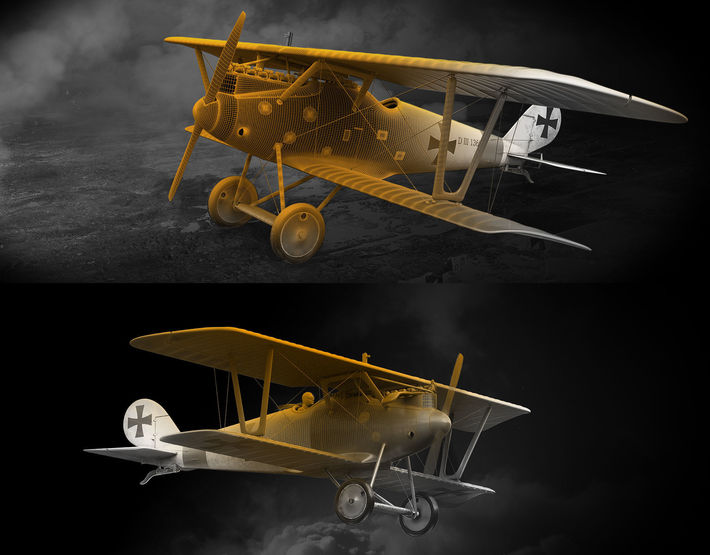 Here I descended from the main objects to less important, paying more attention to the most basic. Since I had 4 groups (aircraft , cockpit , engine, machine guns + pilot who was made afterwards and is not considered), I decided to split the first and second UV’s on two squares, and to make one for the rest. So, the whole body, down to the smallest detail, unfolding in unfold-3D manually. Automatic unwrapping is dangerous here for two reasons: it is often "eats" a lot of space that can be used rationally and creates a lot of seams that are not as scary as rather unpleasant. Yet, manual scan any automatic much better and allows you to make better and more comfortable texture at the end.

All textures are drawn manually (except the pilot, I drew only the texture of the skin for him), procedural maps VrayDirt is not used. I decided to make it so for possibility of having full control over all layers and make each place unique.

For the other two groups (engine, machine guns) was made an automatic unwrapping, exception was made only for certain items because of their structure.

Next, I decided to do all the masks, except for the painted elements on the airplane’s body. So, I made customizable dirt, scratches, etc.

This is very important because the returning back to mari to change the color of rust - not the best solution. Much more competently correctly draw masks, so that eventually we could do BlendMtl or VrayBlendMtl and on the spot, make any material.

Important: better to draw textures in higher resolution than they will eventually be on the scene. This allows to have a better control over various effects therein. I also do all in different layers, even if we are talking about two different types of dirt, which eventually baked in one map before saving from Mari.

Let's start from the simplest thing - from guns. I made two maps for it: mask for rust and scratches on 4K. At the end it should mix two materials to give us a possibility of higher control. Any object will have it’s own ID for personal material. I used MultiSubObjectMtl and placed it into Blend material to mix it with rust. Inside the Multisub part of materials has a scratches mask (not all of them and because this structure). 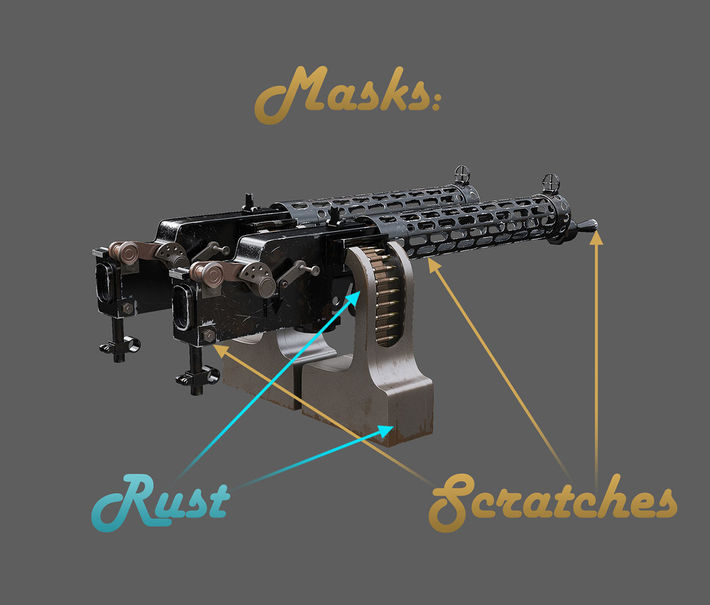 Engine. It’s a little different: it, too has two maps with 4K, but not for scratches and dirt, and for dirt, dust and rust. Throughout the rest of the scheme is identical to guns. 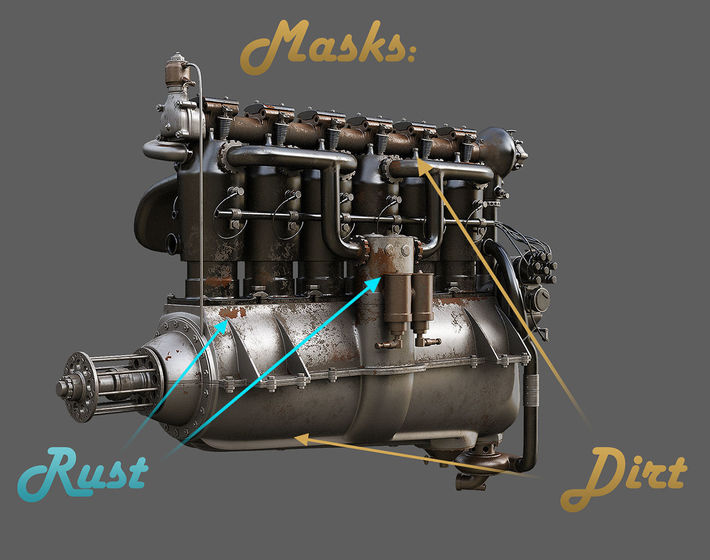 Note: in the earlier version of the engine I used exclusively procedural method using VrayDirt and the result was somewhat different. For the final I decided to make it more realistic and less glamorous and re-drawned textures manually.

Cockpit - more than an interesting story. Here were created two textures - on the frame itself and cockpit with diffuse and dirt. Frame is not visible enough but textured. Much had to draw by myself, so how to find pictures of original instruments in high resolution proved to be very difficult. 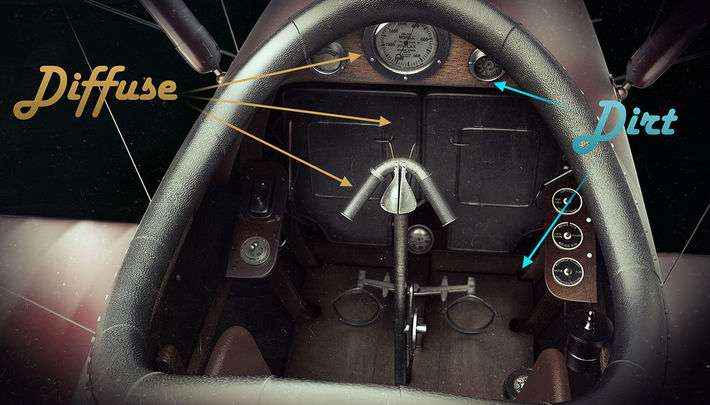 Plane. It's all much more complicated. It was drawn texture with 16K (8K x 2), which was originally drawn in the 32K (16K x 2) and then decreased. Final renderings were done in 8K and not in the usual full HD, so this texture was just here. For close ups can be used full texture.

Below you can find how textures of cockpit and airplane looks like: 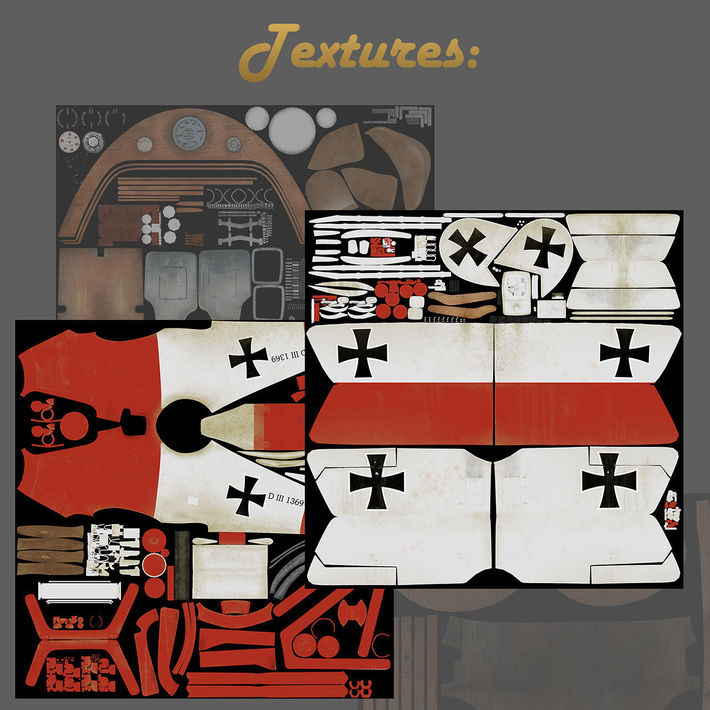 Textures for the aircraft are three - paint, dirt, scratches. In Mari each texture has several layers to easily change the color of various elements, change the intensity of dirt and rust. In the end everything was baked in three textures and applied through the multi-layer Blend on plane. Moreover, the material I did so that it was on top of the dirt and corrosion under it could be seen already chipped. And underneath it all is the material of paint, which, however, has a very intricate structure. 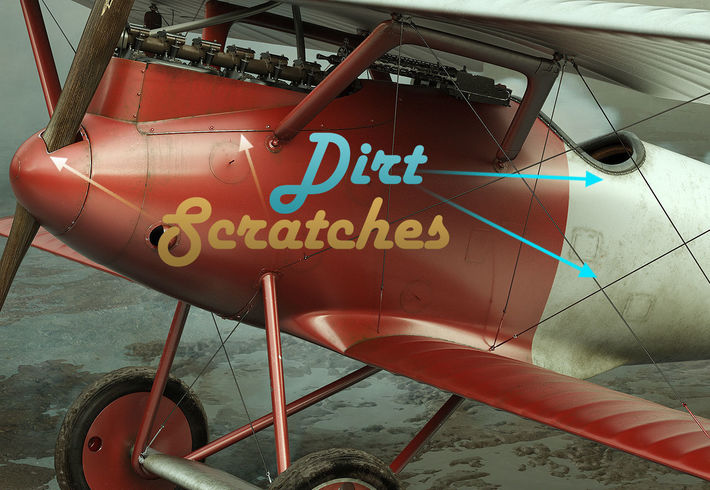 Also do not forget that you can always pull up the dirt already in the material editor, making map more contrast through the file output. To change all the details using this map but with other materials, the map should be made for them general and transferred with type instance, in short, we must use a total node.

Also curious is the volume element of dirt on the wheels in protectors. It’s more complicated, but not so hard as it may seem. 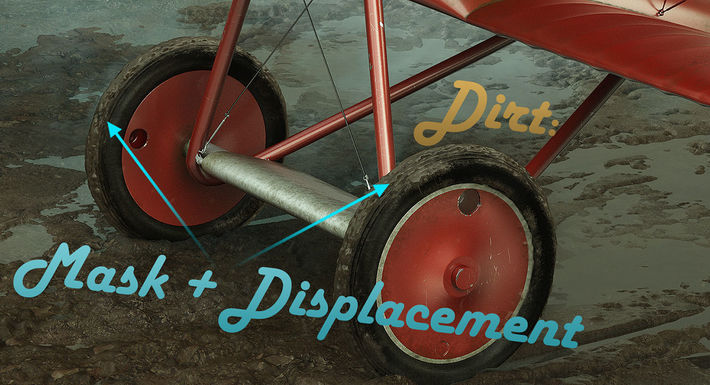 Here you just need to use a mask with the displacement, which will beautifully squeeze dirt on tires. To do this, of course, we will need to deploy beautifully tires and paint them a mask. And it is not necessary to simulate dirt separately. Then you can throw mud on the wheels material, which lies on the ground. 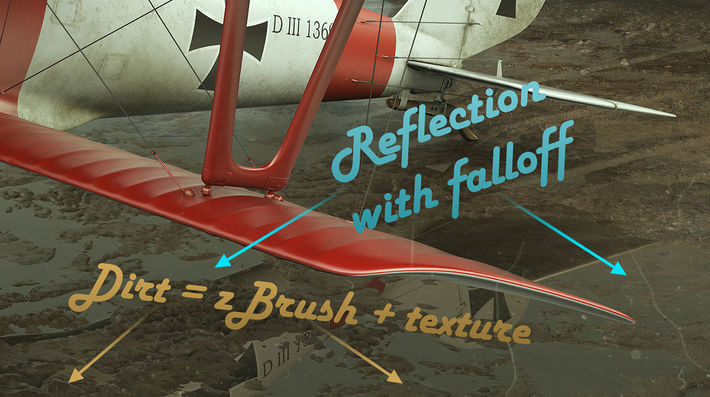 For the main dirt I chose the way with sculpting the area of mud and made it with ZBrush, then with decimation master I optimized the mesh and loaded it into the scene. Then created the material and put the dirt texture into Diffuse. Actually, on Bump was put very small noise and that’s all. Next played with reflections and got dirt.

To create puddles I used plane with falloff on reflection, so the water becomes clear on the approach to the camera, as is happening in reality.

Here everything is simple: HDRI with 360 degrees with sky dome thrown on VrayDomeLight.

Pilot modeled at the very end. Scarf made through the cloth simulation and wind to make it look more alive.

That's it. Actually, as I said in the beginning: what software you will use - essentially no difference. You can make a model anywhere, as unwrapping can be made though Unfold-3D or UV-Layout, etc. the same story with textures - you can do it with 3DCoat, and Mudbox, and using DDO or with only Photoshop at all. The main thing is understanding the essence. Important not to forget that the software - just a tool.

If you want to learn 3D modeling as I do it, come to my online course. At CGTarian we have a lot of interesting courses: modeling, vfx, and animation with instructors from Disney and DreamWorks.

incredible tut!!! incredible model!!!
U
Beautyful work! It`s looks as good as the best aircraft model kit boxes! As the best paintings for them.

I am also an admirer of aviation theme of the First Great Air War. You have a fine tutorial on this subject.
s
Nice job! TYVM!

Thank You Alexandr for sharing!

Helped me once again. THanks.
Likes
6