Lots of the people believe that any progress finally results in regression. It is pointless to argue with the convinced ones. Personally, I appreciate any technology that can improve the life of a human being just by helping to warm up yesterday's dinner in the microwave or washing dishes instead of going through trouble to do it yourself. But there's technology that can completely transform one's life.

3D printing is the exact sphere to seek for the real changes. Joris Peels, a former worker at 3D printing giant shapeways.com, has noticed that a dozen of people still think that 3D printing is something that was invented last week and will be relevant in a few years. But let's be brave and face the fact that it is already valid. This booming technology has recently proven it's importance. When used consciously it performs Jesus-style miracles: helps the deaf to hear and disabled people to walk, helps to grow and regenerate tissues and organs, serves with 3D printed dental implants and much, much more.

So, meet Richard Van As - the person behind the Robohand" project. It has nothing to do with such movies as "Robocop" and "Terminator" or sci-fi elements as you may associate. Ricard Van As and his virtual colleague Ivan Owens both decided to change the order of nature and gave an absolutely truthful meaning to a phrase - "Lend me a hand". They are actually lending hands.

Two people, separated by 10,000 km and working together managed to change a life of 4 people already

The story comes from real life and has nothing to do with fairy tales. Richard has lost a few of his fingers, while working as a carpenter and was trying to find any possible solution to this situation. Let's admit - prosthesis is expensive as hell. So he realised that to replace lost fingers with the prosthetic ones would cost around $10,000 per finger. Then Richard got in touch with Ivan Owens, a Seattle-based theatrical prop desiger, who specialized in hands: both collaborated to create a design for working fingers that could be inexpensively built. And after numerous experiments, they came to the idea of using 3D printer. Two of them were donated by MakerBot industries. As a result, free Robohand model appeared on Thingiverse to be downloaded by anyone, who needs it.

So, Richard has found a way to grab the world with both hands again. He shared his story on the internet and.. boom! He started receiving emails from desperate parents, who raise children being in a high need of hand. A hand to play with a ball, ride a bike, fly a kite or do any other thing we forget to receive pleasure from. Here comes 5 year old Liam, who simply makes you smile. 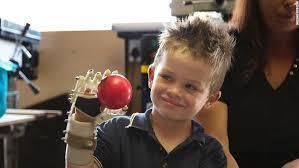 5-year-old Liam a very first kid with a Robohand

Liam suffers from a birth defect called Amniotic Band Syndrome. This syndrome affects 1 in 1,200 births. Illness is the condition that caused Liam to be born without fingers on his right hand. Acctually, finger amputations are the most common amputation in the US, accounting for over 90% of all amputations, according to various reports.

So what's about Liam? With a help of Richard and his magic Robohand Liam now draws, plays basketball and enjoys his childhood. Moreover, there are two more children, who finally deserved a right to be careless kids.

This story is not a just-made-innovation or the unique idea of yesterday's dream. Most of the people have already heard about the "Robohand" project. And there are a bunch of children, who are waiting for a robohand to be made. You can meet them at Robohand's blog. We do want to remind that Richard Van As is doing this absolutely for free. It is natural that he is lacking of funds to get all the necessary material to keep producing robohands. Richard is an important figure of 3D design community and he is really making a world a better place to live. 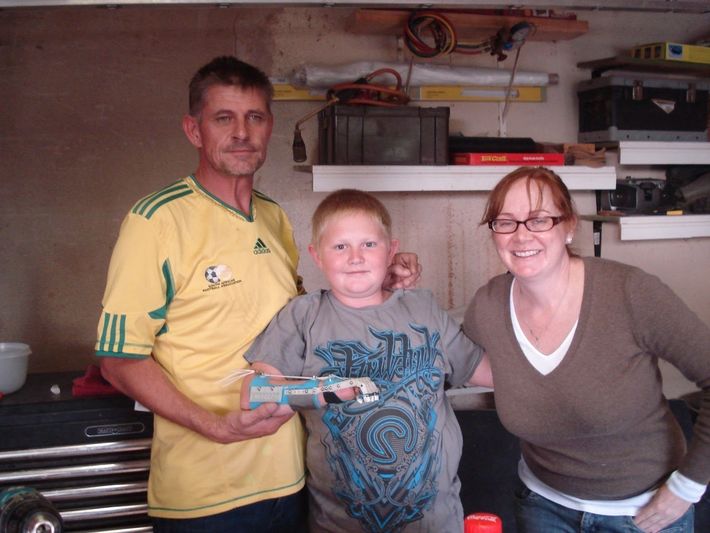 Waldo and his mother just after getting a Robohand

Here at CGTrader.com we decided not only to support a project on our own and promote the free 3D printable model of Robohand on CGTrader, but also to encourage everyone to keep donating.

Do it at Indiegogo.com Robohand Campaign now!

It does not matter that a project has already reached a line of $10,000. It does not matter how much you donate: even $1 is essential. There are still 45 hours to go. Wake up and become a part of this project.To make a long story short, I do recommend to watch this video. Please note that it is extremely emotional, so if you are highly sensitive, think twice.