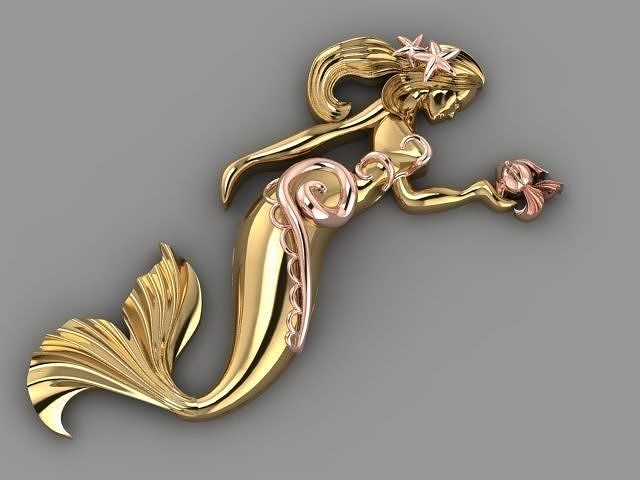 What are the origins of mermaids? How far into humanity's past, our stories of mermaids reach is unknown — possibly since we first began finding creatures in the sea. Archaeologists have found accounts in Mesopotamian mythology of Oannes, a male fish-god from over five thousand years ago.

One of the earliest mermaid legends appeared in Syria around 1000 BC when the goddess Atargatis dove into a lake to take the form of a fish.

As the gods there would not allow her to give up her great beauty, only her bottom half became a fish, and she kept her top half in human form. Archaeologists have found Atargatis' figure on ancient temples, statues and coins.

While the early Britons such as the celts have folktales of mermaids, no illustrations have been uncovered.

The earliest depiction of a mermaid in England can be found in Norman chapel in Durham Castle, built around 1078 by Saxon stonemasons. It is a strange carving, with the mermaid found alongside two leopards and several hunting scenes. Historians believe the mermaid symbolises the temptations of the soul.
Are mermaids lucky? In sailor folklore, mermaids represent both good fortune and disaster. As sailors spent months, sometimes years travelling across vast oceans; it's not surprising that beliefs and superstitions of figures controlling the unpredictable weather appeared in nautical stories over the centuries.

The mermaid's conflicting personalities as both a beautiful and seductive maiden and a monstrous sea creature that dragged sailors to their deaths is a fitting representation for the wild, violent yet fascinating nature of the sea itself.

Mermaids often appear as figureheads on the front of nautical vessels. The figurehead, which was popular between the 16th and 20th centuries is a carved wooden decoration located on the bow of ships. While many different decorations have been used, mermaids proved popular with the sailors as they were believed to appease the sea, ensuring good weather and finding a safe way back to land.

Early mapmakers such as Olaus Magnus, used sea monsters (including mermaids) to portray dangerous geographic areas of the oceans - places where bad weather and shipwrecks were frequent.

To this day, shipwrecks are frequent when vessels are coming into land. Running aground can happen for any number of reasons, such as changes in water depths or navigating errors, but this may explain why sirens or mermaids were said to congregate in these regions.