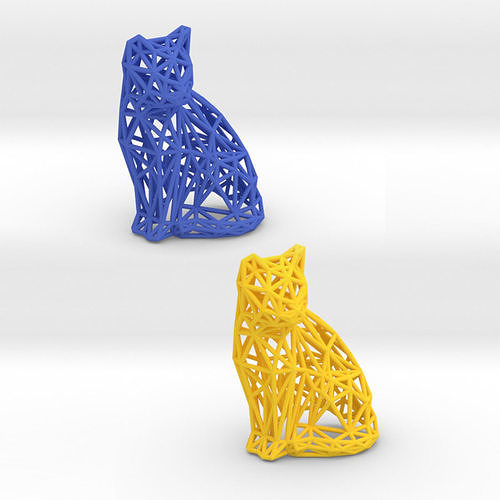 The cat (Felis catus) is a small carnivorous mammal. It is the only domesticated species in the family Felidae and often referred to as the domestic cat to distinguish it from wild members of the family.The cat is either a house cat or a farm cat, which are pets, or a feral cat, which ranges freely and avoids human contact.House cats are valued by humans for companionship and for their ability to hunt rodents. About 60 cat breeds are recognized by various cat registries. Notes: 3d print ready , 3ds, wrl , obj, max, stl , fbx, formats are included, the 3ds format is low poly , rest is high poly, hope you like the model and dont forget to leave a review.

The cat is similar in anatomy to the other felid species, has a strong flexible body, quick reflexes, sharp teeth and retractable claws adapted to killing small prey. Its night vision and sense of smell are well developed. Cat communication includes vocalizations like meowing, purring, trilling, hissing, growling and grunting as well as cat-specific body language. It is a solitary hunter, but a social species. It can hear sounds too faint or too high in frequency for human ears, such as those made by mice and other small mammals. It is a predator that is most active at dawn and dusk.It secretes and perceives pheromones.

Female domestic cats can have kittens from spring to late autumn, with litter sizes ranging from two to five kittens.[9] Domestic cats are bred and shown as registered pedigreed cats, a hobby known as cat fancy. Failure to control breeding of pet cats by spaying and neutering, as well as abandonment of pets, resulted in large numbers of feral cats worldwide, contributing to the extinction of entire bird species, and evoking population control.

It was long thought that cat domestication was initiated in Egypt, because cats in ancient Egypt were venerated since around 3100 BC.However, the earliest indication for the taming of an African wildcat (F. lybica) was found in Cyprus, where a cat skeleton was excavated close by a human Neolithic grave dating to around 7500 BC.African wildcats were probably first domesticated in the Near East.

As of 2017, the domestic cat was the second-most popular pet in the United States by number of pets owned, after freshwater fish,with 95 million cats owned.[16][17] In the United Kingdom, around 7.3 million cats lived in more than 4.8 million households as of 2019.