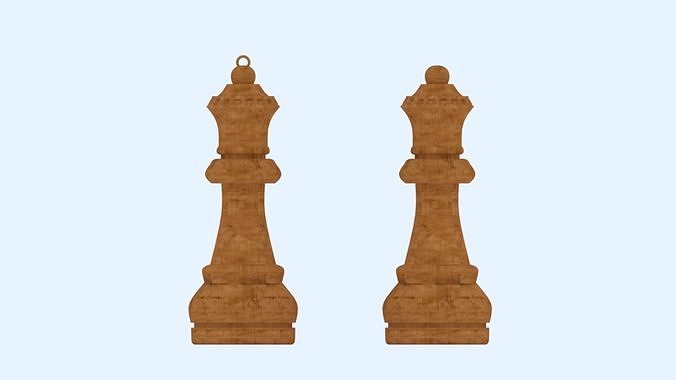 one object for keychain and 2nd object playing chess.

The queen is the most powerful piece in the game of chess, able to move any number of squares vertically, horizontally or diagonally. Each player starts the game with one queen, placed in the middle of the first rank next to the king. Because the queen is the strongest piece, a pawn is promoted to a queen in the vast majority of cases.

In the game shatranj, the ancestor of chess that included only male figures, the closest thing to the queen was the ferz, a weak piece only able to move or capture one step diagonally and not at all in any other direction. The modern chess queen gained power in the 15th century.

The queen can be moved any number of unoccupied squares in a straight line vertically, horizontally, or diagonally, thus combining the moves of the rook and bishop. The queen captures by occupying the square on which an enemy piece sits.

Although both players start with one queen each, a pawn can be promoted to any of several types of pieces, including a queen, when the pawn is moved to the player's furthest rank (the opponent's first rank). Such a queen created by promotion can be an additional queen, or if the player's queen has been captured, a replacement queen. Pawn promotion to a queen is colloquially called queening, which is by far the most common type of piece a pawn is promoted to due to the relative power of a queen.