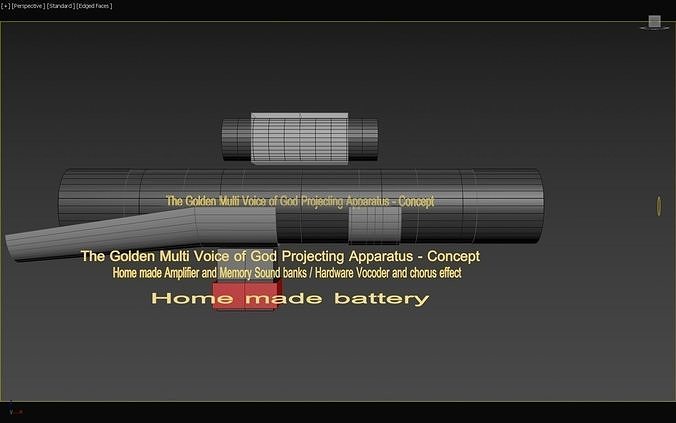 Look very carefully at the drawing and the circuits, and the shapes and i will explain. Instant at the left battery which serves as an amplifier of the waves in the circuit. Or I can use a pre built small amplifier for the device, can’t be that complicated or still actually hold a patent i suppose. I’m gonna guess Tesla invented a usable version a long time ago.

Now we have the positive pole connected to then inner coil, which follow a compressional shape of the coil, speeding up the waves we want to project over a large distance, directly into a persons ear bone, as far as we can. The current is compressed and is able to hold a lot of current on its total surface.

The outside of the coil is silvered plated, speeding up part or all of the current over the surface, from positive left to compressed tightened right outward. We pack a lot of current in a small area, that we push out using electrical wind, sending the message, the fibrational packet, very far, using a thin final needle. The thin needle can only move micrometers up or down physically, literally a pick up needle that sends in stead of reads. The actual size of the produced waves, is micro or even smaller sized.

The micro Nano needle can only move up and down very little to keep the message truly very small of size, made physically so. I would add a Chorus effect to my message to ensure less vibrational packet loss by repeating the same vibration followed up extremely quickly so the ear thinks it hears actual Multiple voices.

Multiple voice carrying the same message will minimize loss of “information” during projection by outside influences like other 360 degree sound sources moving through gods voice path.

I can even auto tune and harmonize my many voices if I could trigger pre recorded messages using a small computer, remembering the specific range of frequencies, their order and their speeds.

Be sure to act responsibly, if you ever home make one for yourself freely, or buy one from me. God bless you. Amen.

Oshit! If i had acces to the actual original voice captured of a target person, I could simulate their own voices, and whisper my thoughts into their ear, in their own voice. Damn! Not a good sign. If someone had acces to my dental works, he could simulate my mouth and therefor me my exact voice. Then the words get the properties of, my voice before sending them. I recognize my own voice. I recognize the frequencies only i specifically make. So if I gave the audio a persons own characteristics, he would assume it to be his own inner voice, allowing other people to make continual suggestions from a far. Damn. It’s elaborate now, but we advance quite quickly now. In a little while people will like to actually own a simulated speech box if their own voice. If I can type my messages and a computer speaks for me in my own voice, that would be quite nice. But as always opens up opportunities for evil. One could call someone and pretend to be actual family, as they also recognize your specific frequencies. Damn. Combine that with being able to zoom in on one’s eye balls reading their brain frequencies, or frequencies the brain generates, while translating thoughts, or words, into frequencies. The eye nerves are like fiber cables with light signals in it that no man can read, but computers do and translate for us. Computers can be thought to recognize specific patterns of frequencies we call words. Damn. Combine with a light bending suit making one appear ghostlike, damn. Combine that with ai speeds, pre programmed ready to detect, contemplate, and act, before we can even make our hands lift up. Combine that with genetic super abilities found through aeons of genetic research, that we are the product of. We are basically a speaker, microphone, camera and processor, grown bio “logically”. They build with dna like man’s children build with Lego. 3d printed sore bodies. Augmented and upgraded parts, better cameras, faster computers, invisible, stronger, faster, less needs, you can pick the best of nature, from everywhere, and combine it into a synthetic life form, even able to transform between multiple forms, all programmed and designed, only better than us.

These religious people that are spoken too, by a telepathic voice. Telepathic means: “apparently in their heads”. These religious people hear the voice in their head. They see no lips move, thus think the voice is telepathic, and thus super natural, as no man is seen moving his lips, and no mortal man can do this, yet. No mortal man, can perform this trick, yet. The person sending the message, is unseen, and chose to message a religious person, without showing Himself, the man behind the curtain, to this religious person.

In reality however, these good religious people, good of faith, suspecting of no evil, harmless doves, turning the other cheek, merely “hear” a male voice, without seeing lips move, speak directly into their ear, by an unseen sender. The rest are all his self filled in assumptions, in turn not denied by the sender. They directly assume divinity, assume god, and he assumes the voice, is “in his head”, and the sender does not like to be seen, yet has acces to “high” technology.

If a male voice can be projected into a religious man’s ear, asking him if he is ready to perform te Lords work, you know what time it is, One could gravely manipulate this religious man, pretending to be god, using technology unknown to this simple mortal man. And have an extremely unfair advantage, knowing “exactly” what he believes to be true, the poor unsuspecting soul.

If you reverse the workings of a normal speaker, to not project wide, but to project microwave thin, and create a big pressure through the straw, can you push the waves out forcibly far, and thin. a very, very small audio signal must be projected highly precise, with much pressure, as the further the distance, increases your chances of remaining unseen.

If you 3d print a container for a audio speaker, and have it have thick walls, dampening the sound outside of the system, but transfer their vibrational motion directly into a long thin straw, and or needle, now the waves comming through the straw are very thin, a very thin amplitude, moving a string of air towards the far receivers tiny ear Membrane location.

I predict these religious people only hear gods voice in mono, as the projection only works from One far side at a time, as synchronizing this with two behind the curtain hiders is much harder, but they are so impressed by the trick, they soon forget, or not even realize this at all, as their attention is most highly and direct focused on the message they must hear. And he who believes god personally started to speak to him directly, has already lost the battle.

“Only by sound, could their faces be seen”.

I wonder what happened, if one were to “misdirect” these “harmless” audio waves.

I am telling you, He who uses tricks, to get something done from me, is no god of mine, Real gods, need no humans. Real gods have no need for the shadows.

Please be so kind as to buy a small model, or make a small donation if you can, towards the realization of my concepts.

i live off of comments, your likes and your tips. thank you for watching and reading.

to The Golden voice of God - Mind Whisperer- Apparatus - Concept