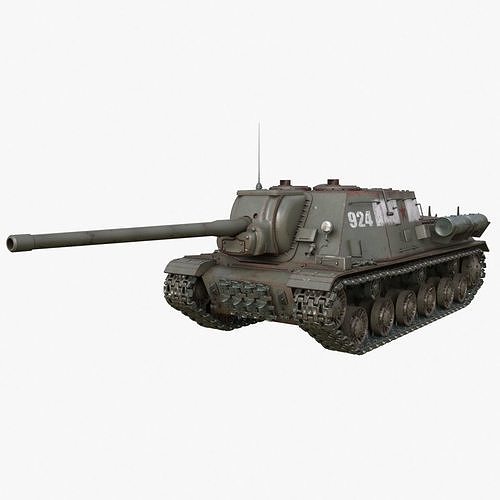 Tank ISU 122 Russian A prototype of the ISU-122 (in Russian -122) heavy self-propelled gun was built at the Chelyabinsk Kirov Plant (Chelyabinskiy Kirovskiy Zavod (ChKZ), Chelyabinsk, Russia), in December 1943. The design shared the chassis of the ISU-152 self-propelled gun and differed only in armament, having an A-19S 122-mm gun as its main weapon instead of the ISU-152's ML-20S gun-howitzer. Towed versions of these guns used the same carriage: 52-L-504A (Russian designation 52--504), so installation of an A-19 instead of an ML-20 gun was not a difficult task. After completing development of the ISU-152, ChKZ engineers mounted the A-19 gun on the ISU-152 chassis to create 'Object 242' the first ISU-122 prototype. It was successfully tested, but not immediately launched into mass production.

At that time, all ISU hulls were being equipped with the ML-20S gun-howitzer, but the production of hulls increased quickly and there was a lack of ML-20S tubes in the beginning of 1944. State authorities ordered these uncompleted hulls armed with an A-19 gun (specifically with the A-19S variant, slightly modified for the self-propelled gun mount). A further advantage of rearming the ISU was increased direct fire range against heavy German tanks. For these reasons, the State Defense Committee adopted Object 242 for Red Army service as the ISU-122 on 12 March 1944. In April 1944, the first series ISU-122 left the ChKZ production lines.