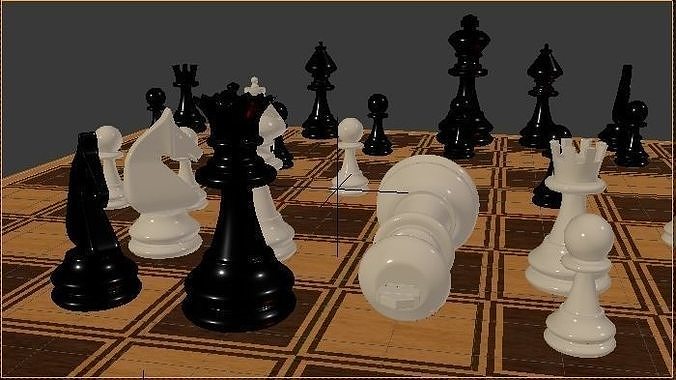 Chess is a board game for two players. It is played on a square board, made of 64 smaller squares, with eight squares on each side. Each player starts with sixteen pieces: eight pawns, two knights, two bishops, two rooks, one queen, and one king. The goal of the game is for each player to try and checkmate the king of the opponent. Checkmate is a threat ('check') to the opposing king which no move can stop. It ends the game.

During the game, the two opponents take turns to move one of their pieces to a different square of the board. One player ('White') has pieces of a light color; the other player ('Black') has pieces of a dark color. There are rules about how pieces move, and about taking the opponent's pieces off the board. The player with white pieces always makes the first move. Because of this, White has a small advantage, and wins more often than Black in tournament games.

Chess is popular and is often played in competitions called chess tournaments. It is enjoyed in many countries, and is a national hobby in Russia.

Most historians agree that the game of chess was first played in northern India during the Gupta Empire in the 6th century AD.[8][9] This early type of chess was known as Chaturanga, a Sanskrit word for the military. The Gupta chess pieces were divided like their military into the infantry, cavalry, elephants, and chariots. In time, these pieces became the pawn, knight, bishop, and rook. The English words chess and check both come from the Persian word shāh meaning king.[8]

The earliest written evidence of chess is found in three romances (epic stories) written in Sassanid Persia around 600AD. The game was known as chatrang or shatranj. When Persia was taken over by Muslims (633–644) the game was spread to all parts of the Muslim world. Muslim traders carried the game to Russia and to Western Europe. By the year 1000 it had spread all over Europe. In the 13th century a Spanish manuscript called Libro de los Juegos describes the games of shatranj (chess), backgammon, and dice.

The game changed greatly between about 1470 to 1495. The rules of the older game were changed in the West so that some of the pieces (queen, bishop) had more scope, development of the pieces was faster, and the game more exciting. The new game formed the basis of modern international chess. Historians of chess consider this as the most important change since the game was invented.

Chess is played on a square board divided into eight rows of squares called ranks and eight columns called files, with a dark square in each player's lower left corner. This is altogether 64 squares. The colors of the squares are laid out in a checker (chequer) pattern in light and dark squares. To make speaking and writing about chess easy, each square has a name. Each rank has a number from 1 to 8, and each file a letter from a to h. This means that every square on the board has its own label, such as g1 or f5. The pieces are in white and black sets. The players are called White and Black, and at the start of a game each player has 16 pieces. The 16 pieces are one king, one queen, two rooks, two bishops, two knights and eight pawns.

The king (K for short) can move one square in any direction. The king may not move to any square where it is threatened by an opposing piece. However, the king can move to a square that is occupied by an opponent's piece and capture the piece, taking it off the board. The queen (Q) can move any distance in any direction on the ranks, files and diagonals. The rooks (R) move any distance on the ranks or files. The bishops (B) move diagonally on the board. Since a bishop can only move diagonally, it will always be on the same color square. The knights (Kt or N) move in an L shape. Each move must be either two squares along a rank and one square along a file, or two squares along a file and one square along a rank. It is the only piece that can jump over other pieces. Like the other pieces, it captures an opposing piece by landing on its square. The pawns can only move up the board. On its first move a pawn may move either one or two squares forward. A pawn captures one square diagonally, not as it moves: see white circles on its diagram. In some situations, pawns can capture opponent's pawns in a special way called en passant, which means in passing in French .

Checkmates are rare in competitive chess. The most common ends are decisions made by one or both players.

Wins Checkmate. When a king is in check, and cannot get out of it. Resignation. A player may resign at any time, usually because his/her position is hopeless. A losing player is able to resign by placing their king on its side on the chessboard. Out of time. If player's clock time is over (exceeding the time control). Strictly speaking, this is not part of the rules of the game, but part of the rules of tournament and match chess where chess clocks are used. Draws Draw agreed. A game may end in a draw at any time if one player offers a draw and the other accepts. Insufficient Material Or Dead Position . A position where no series of legal moves could lead to a mate (example: K+B vs K). The game is drawn. Stalemate. If a player cannot make a move, and the player's king is not in check, this is also a draw. This kind of draw is called a stalemate, and is rare. 50-move rule. A game will also end in a draw if no piece is captured and no pawn has moved after fifty moves. This is called the fifty-move rule, and happens late in the game. Threefold repetition. If the exactly same position is repeated three times during a game with the same player to move each time, the player next to move may claim a draw. The game is now drawn. This is called a draw by threefold repetition.

I think that this would be helpful for you.