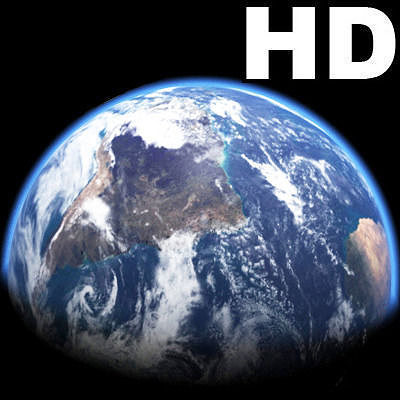 Note: The zipped file is about 13 MB because it already contains the huge map textures.

Night lights in the dark side of Earth. The night lights appear as the day light disappears by rotating Earth´s atmospheric gizmo. The magic of exclusions and transparencies.

Ready-to-render setup and environment with default renderer, no external renderers or plugins required.

And last but not least, 6 extra high resolution map variations of Earth´s clouds that you can replace by the current one (Australia – cloudy and hazy everywhere except Australia and New Zealand):

Storm warning – same as above, plus a cyclone, typhoon, and two hurricanes

Africa – cloudy and hazy everywhere except Africa and Middle East

Asia – cloudy and hazy everywhere except South and East Asia

Watch the animation below!

Note: This price is ridiculous and may not last for long!

And this model is also available in my stupidly cheap HD planets pack called 'Incredible HD Earth and Planets'. Just make a search with that name, or click my avatar.