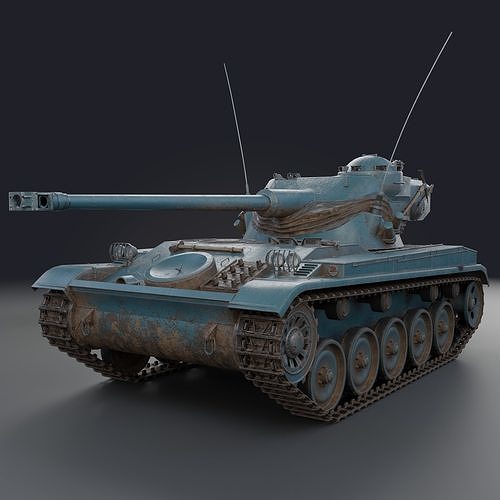 If you want to take your renders and animations to the next level, this model of the french light tank „AMX-13/75“ is perfect for you.

Being carefully crafted with realism and performance optimization in mind, this model will definitely help you to enhance your project and get the most out of your renders and animations. The „AMX-13/75“ is a light tank, produced by Atelier de Construction Ronne in France from 1952-1987.

Different versions of this vehicle saw extensive combat use in numerous wars across the globe. This version of the AMX-13 is equipped with a 75mm gun for engaging armored targets, giving it the designation „AMX-13/75“

Each object uses a separate material and has its own UV’s.

All objects are scaled in the metric system and according to real-life counterparts.

The model consists mostly of Quads, as seen in the preview images, and has a clear topology (no artifacts, overlapping polygons, etc.)

Each object uses separate materials, which are named accordingly to the object.

Each object has its own UV’s

Each material/object is provided with the following textures with the resolution 4096px X 4096px, to suit both Metallic/Roughness and Specular/Glossiness PBR workflows.

I hope you find this Model helpful when creating your new masterpiece. :)