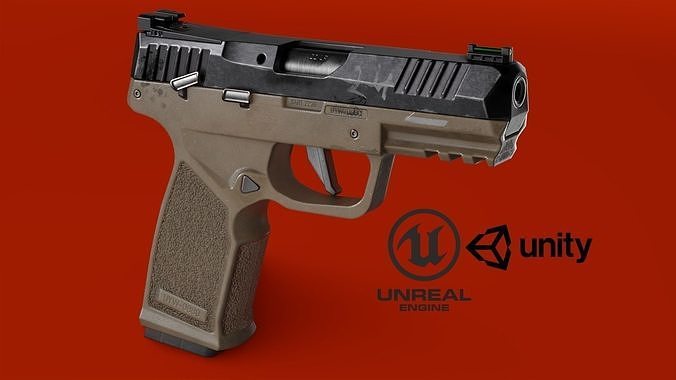 There are 5 skins for weapons.

If you need more skins, write to me

You can downscale the textures from 4K to 2K or 1K depending on your needs but you'll get the highest resolution to decide for yourself. (do not read)A handgun is a short-barrelled firearm that can be held and used with one hand.[1] The two most common handgun sub-types in use today are revolvers and semi-automatic pistols, although other handgun-types such as derringers and machine pistols also see infrequent usage.

In the days before commercial mass production, handguns were often considered a badge of office, much the same as a ceremonial sword. As they had limited utility and were more expensive than the long guns of the era, handguns were carried only by the very few who could afford to purchase them. However, in 1836, Samuel Colt patented the Colt Paterson, the first practical mass-produced revolver. It was capable of firing 5 shots in rapid succession and very quickly became a popular defensive weapon, giving rise to the saying, God created men, but Colt made them equal.[2][3] Today, in most of the world, handguns are generally used primarily by police and military officers as sidearms. However, in the United States and some other countries around the world, handguns are also widely available to civilians and commonly carried for self-defense.