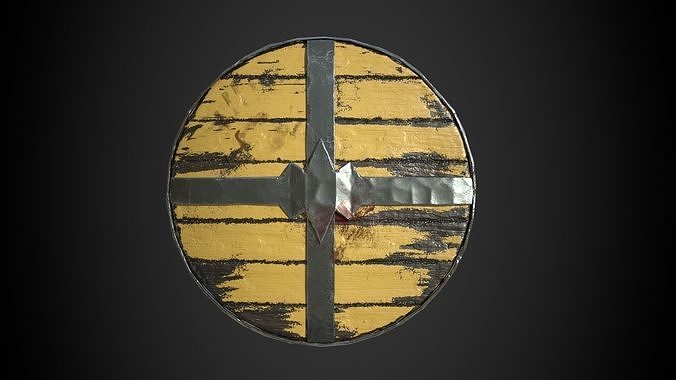 Hello, their! Here is a Viking historical yellow shield. Viking style round shield, steel boss, bolted steel rim, and arm strap. In the Viking age, fighting men used large, round, wooden shields gripped in the center from behind an iron boss. Shields represent one of several instances where the literary sources and archaeological sources do not agree on how Viking weapons were constructed. The Norwegian Gulaþing and Frostaþing laws specify the construction of a shield. The shield should be made of wood with three iron bands and a handle fastened to the backside by iron nails. A later revision of the law says that the shield should be made of a double layer of boards (tvibyrðr), and the front should be painted red and white. A few shields have survived from the Viking age, notably the shields from the Gokstad ship, which date from the 10th century. The ship was equipped with 32 shields, several of which survive intact. They were made from a single layer of planks butted together, with no iron bands, and the fronts were painted black and yellow. Typical Viking shields were 80-90cm (32-36 inches) in diameter. Some were larger, such as the Gokstad shields, which were 94cm (37in) across. Based on surviving remnants, some shields appear to have been as small as 70cm (28in) in diameter. Presumably, when a man-made a shield for himself, he sized it to fit his body size and fighting style. A shield needs to be big enough to provide the desired protection but no bigger. A shield too small exposes additional lines of attack that an opponent might exploit, while a shield too large slows the defensive responses and exhausts the fighter unnecessarily. All the surviving examples are made from solid butted planks, although literary evidence, such as the 10th century Frankish poem Waltharius, and the Gulaþing laws, suggests that shields were made of laminated wood. No archaeological evidence supports this style of construction during the Viking era in Norse lands. Surviving shields are made from spruce, fir, or pine. Again, literary evidence contradicts and suggests that shields were made with linden wood (Tilia, commonly known as basswood in North America). The word lind (linden) is used to mean shield in poems such as Völuspá (50), and the term lindiskjöldr (linden shield) is used in some sagas. Linden certainly has advantages over other species of wood for shield use. It is lightweight and does not split as readily under impact as do other types of wood.

All textures are made in 4k resolution. A low-poly ready-to-game model. You can re-size textures inside the engine.

All texture UV are separated.