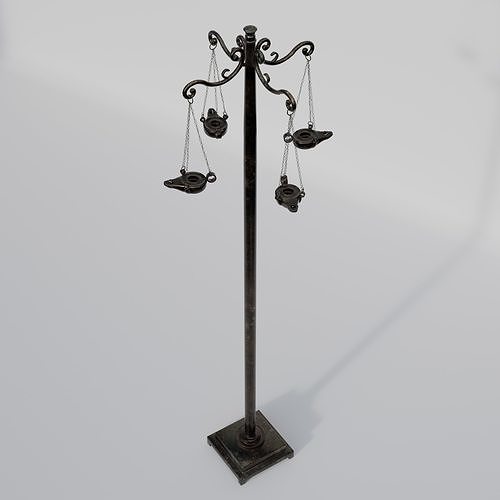 The lucerne or ancient Roman oil-lamps were small utensils, made of bronze or terracotta, used since prehistoric times, although it was the ancient Romans who exploited their mass production and their widespread use to have artificial light. They were fueled with olive oil and had from one to a dozen wicks. Some had handles, so they could be carried from room to room, and could also be carried by actors in plays or by participants in ritual activities. Those made of bronze had greater durability. For lighting large rooms, several oil lamps were used hanging from each arm of a standing bronze chandelier. Historically accurate game ready asset modeled in Blender and high quality PBR (Diffuse/Metallic/Roughness/Normal_OpenGL) textures in Substance Painter at 4k 2k and 1k resolution and subdivision ready for different LOD implementations, at FBX and OBJ and .blend files to work with any 3D software.