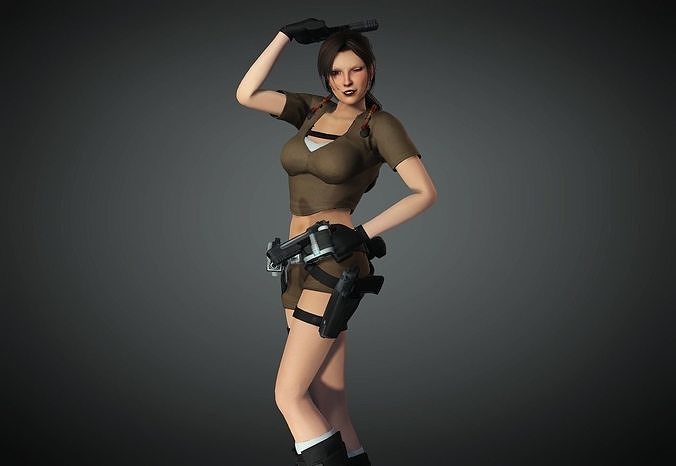 Low-poly model of the character Laura Croft. Ready for different kind of games.

+Clean topology based on quads

+All meshes are completely UV unwrapped

Lara Croft is a fictional character and the main protagonist of the video game franchise Tomb Raider. She is presented as a highly intelligent and athletic English archaeologist who ventures into ancient tombs and hazardous ruins around the world. Created by a team at British developer Core Design that included Toby Gard, the character first appeared in the video game Tomb Raider in 1996.

Core Design handled the initial development of the character and the series. Inspired by strong female icons, Gard designed Lara Croft to counter stereotypical female characters. The company modified the character for subsequent titles, which included graphical improvements and gameplay additions. American developer Crystal Dynamics took over the series after the 2003 sequel Tomb Raider: The Angel of Darkness was received poorly. The new developer rebooted the character along with the video game series. The company altered her physical proportions and gave her additional ways of interacting with game environments. Croft has been voiced by six actresses in the video game series: Shelley Blond (1996), Judith Gibbins (1997–98), Jonell Elliott (1999–2003), Keeley Hawes (2006–14), Camilla Luddington (2013–present), and Abigail Stahlschmidt (2015).

Lara Croft has further appeared in video game spin-offs, printed adaptations, a series of animated short films, feature films, and merchandise related to the series. The promotion of the character includes a brand of apparel and accessories, action figures, and model portrayals. She has been licensed for third-party promotion, including television and print advertisements, music-related appearances, and as a spokesmodel.

Critics consider Lara Croft a significant game character in popular culture. She holds six Guinness World Records, has a strong fan following, and is among the first video game characters to be successfully adapted to film.[3] Lara Croft is also considered a sex symbol, one of the earliest in the industry to achieve widespread attention. The character's influence in the industry has been a point of contention among critics; viewpoints range from a positive agent of change in video games to a negative role model for young girls.