Posted in Character 3 months ago
by 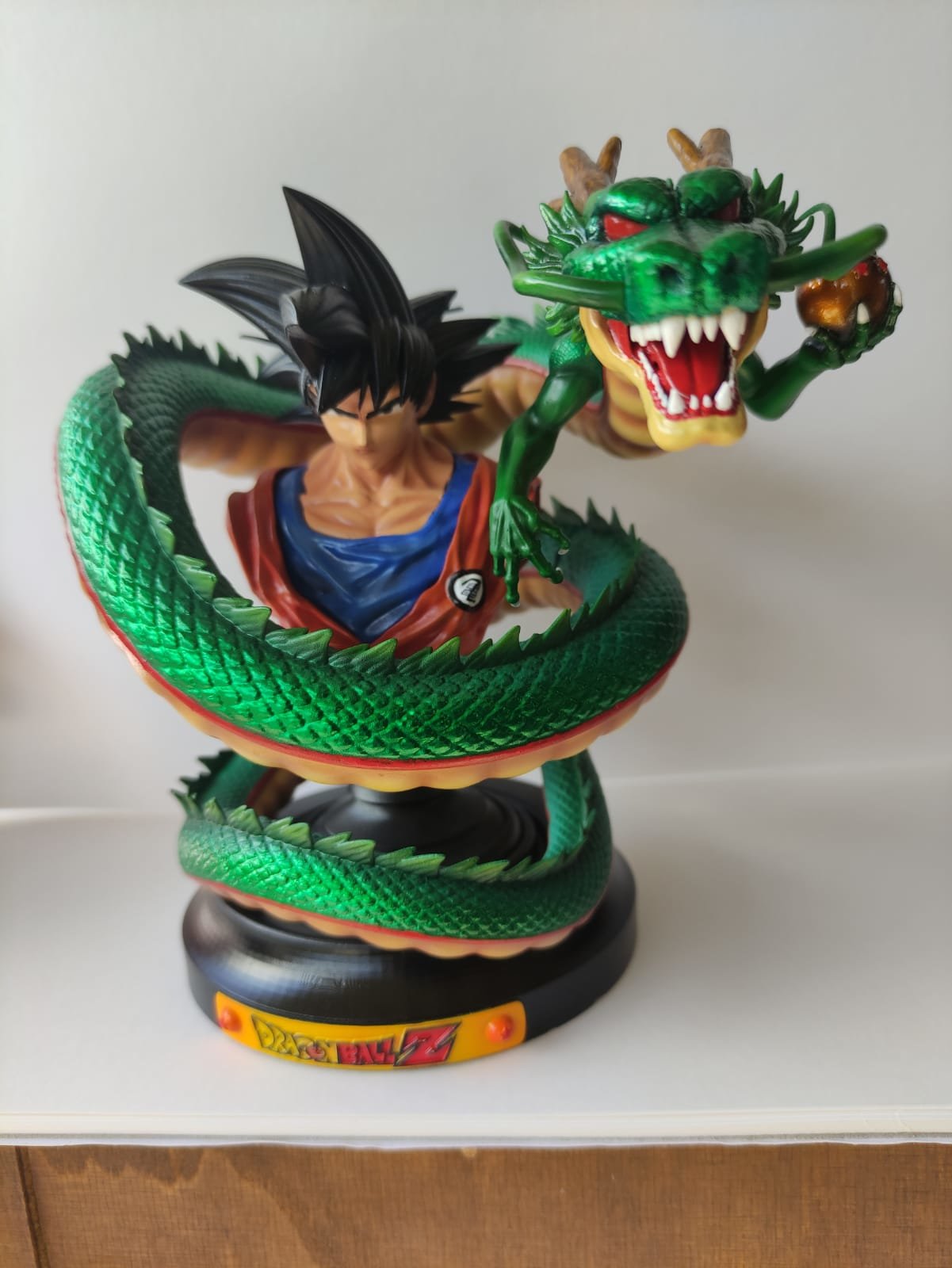 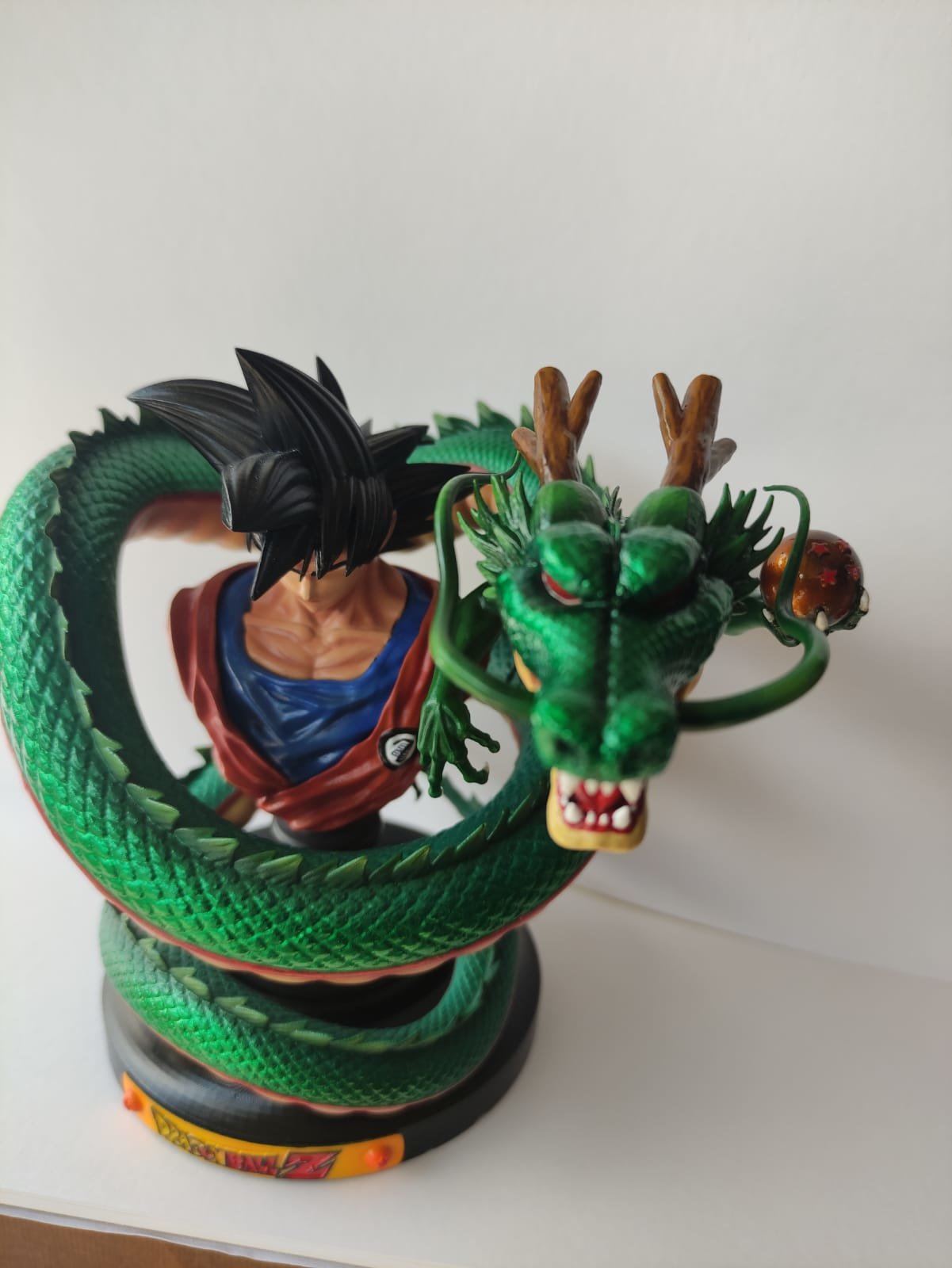 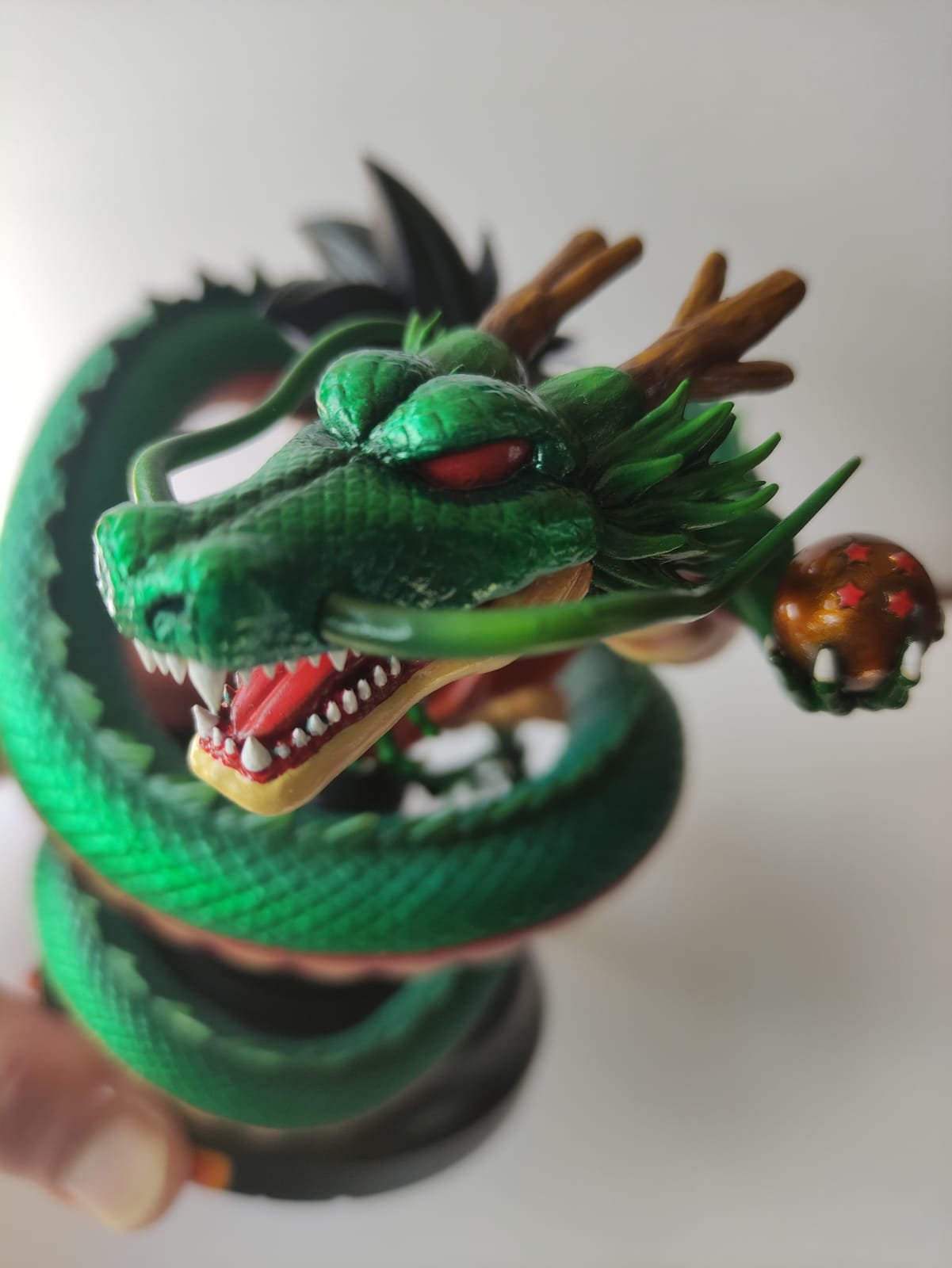 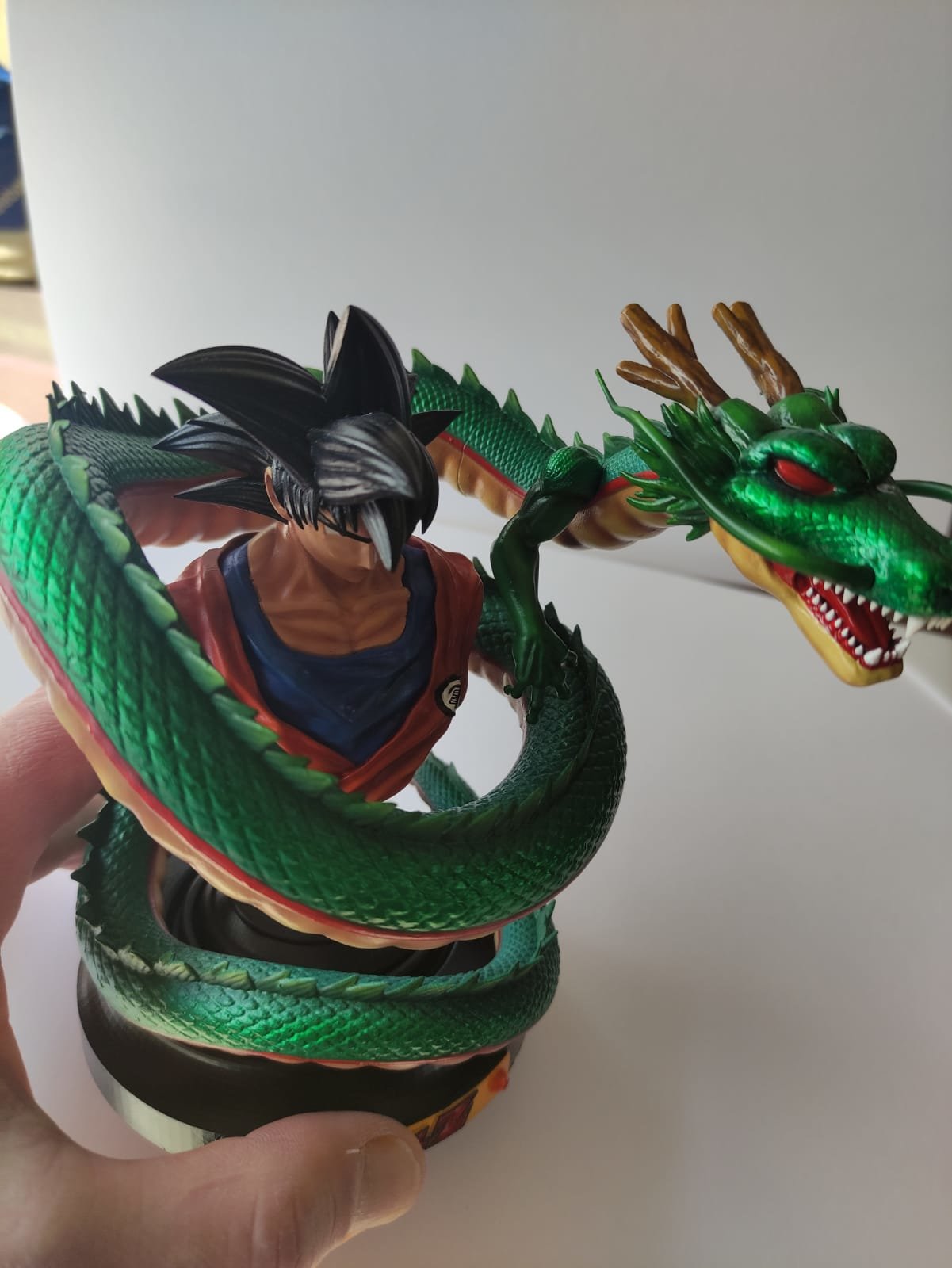 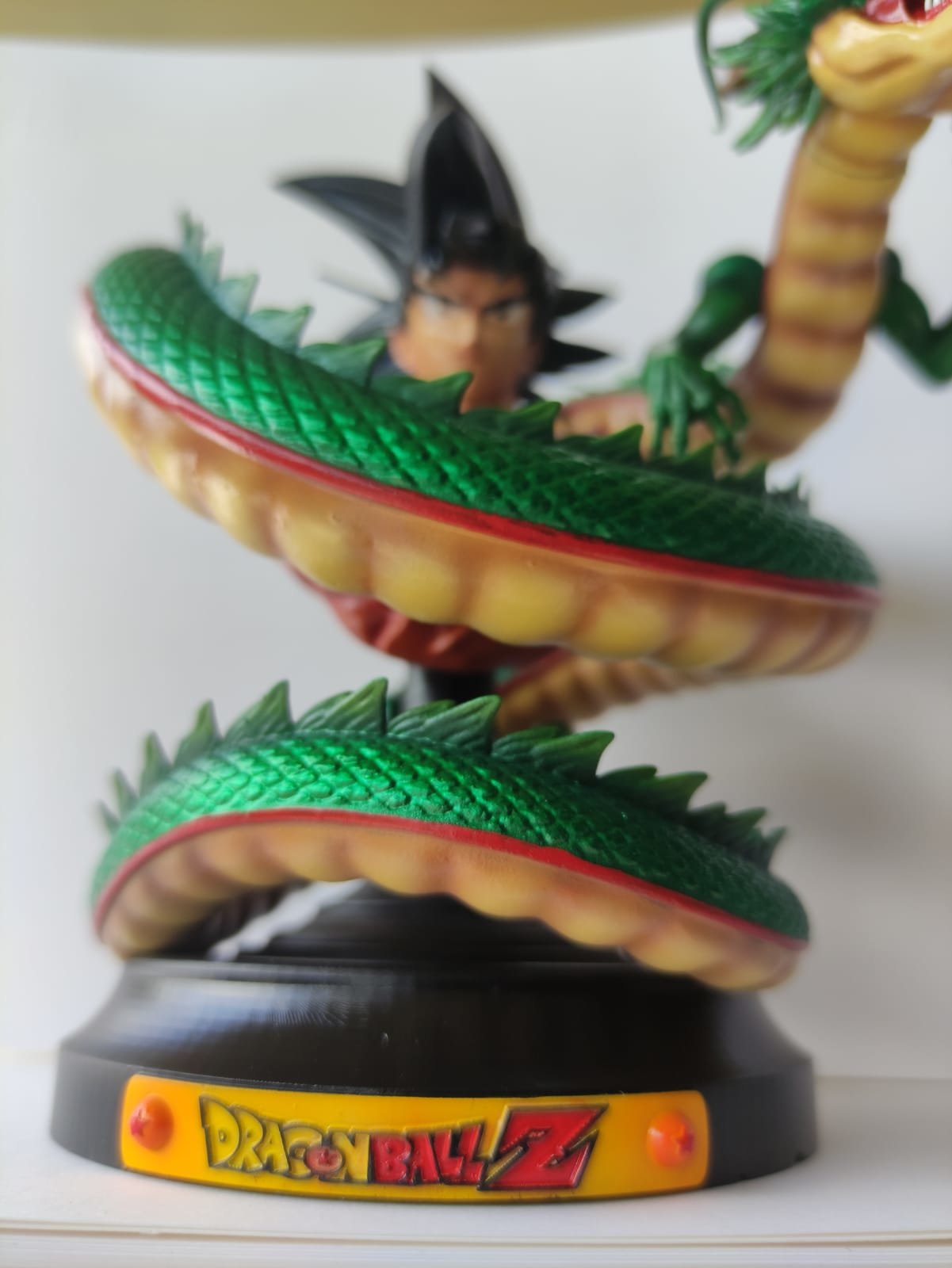 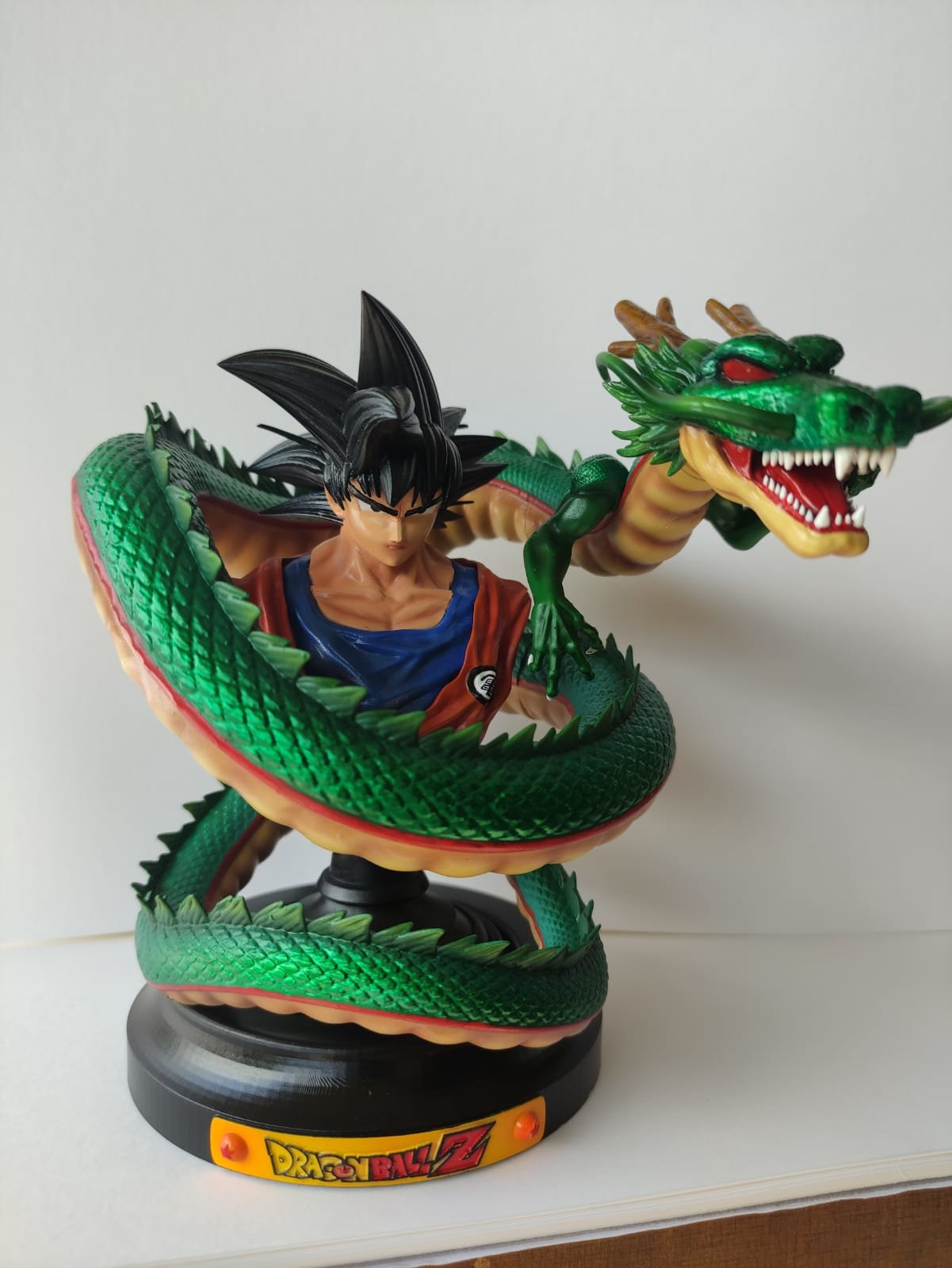 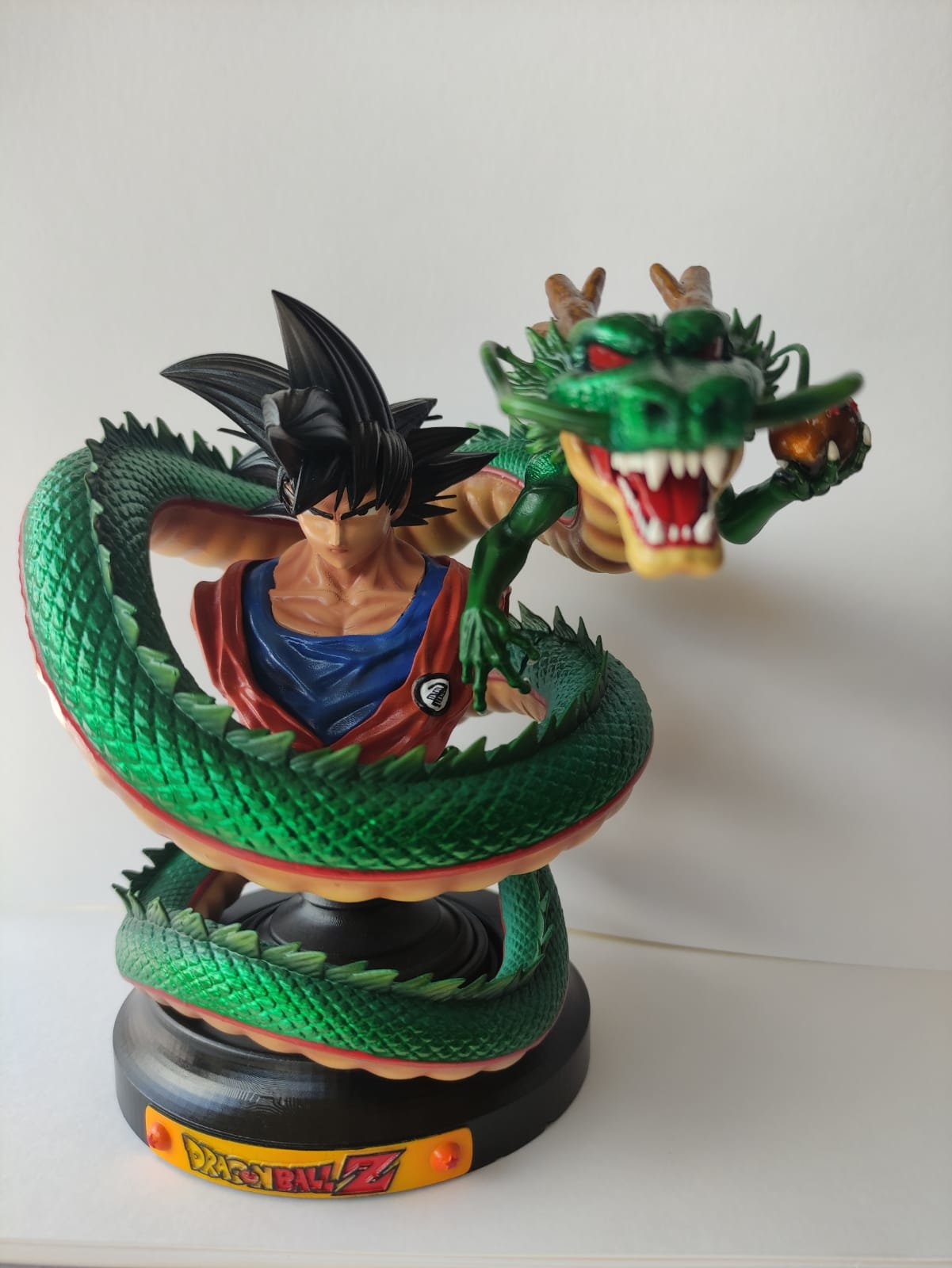 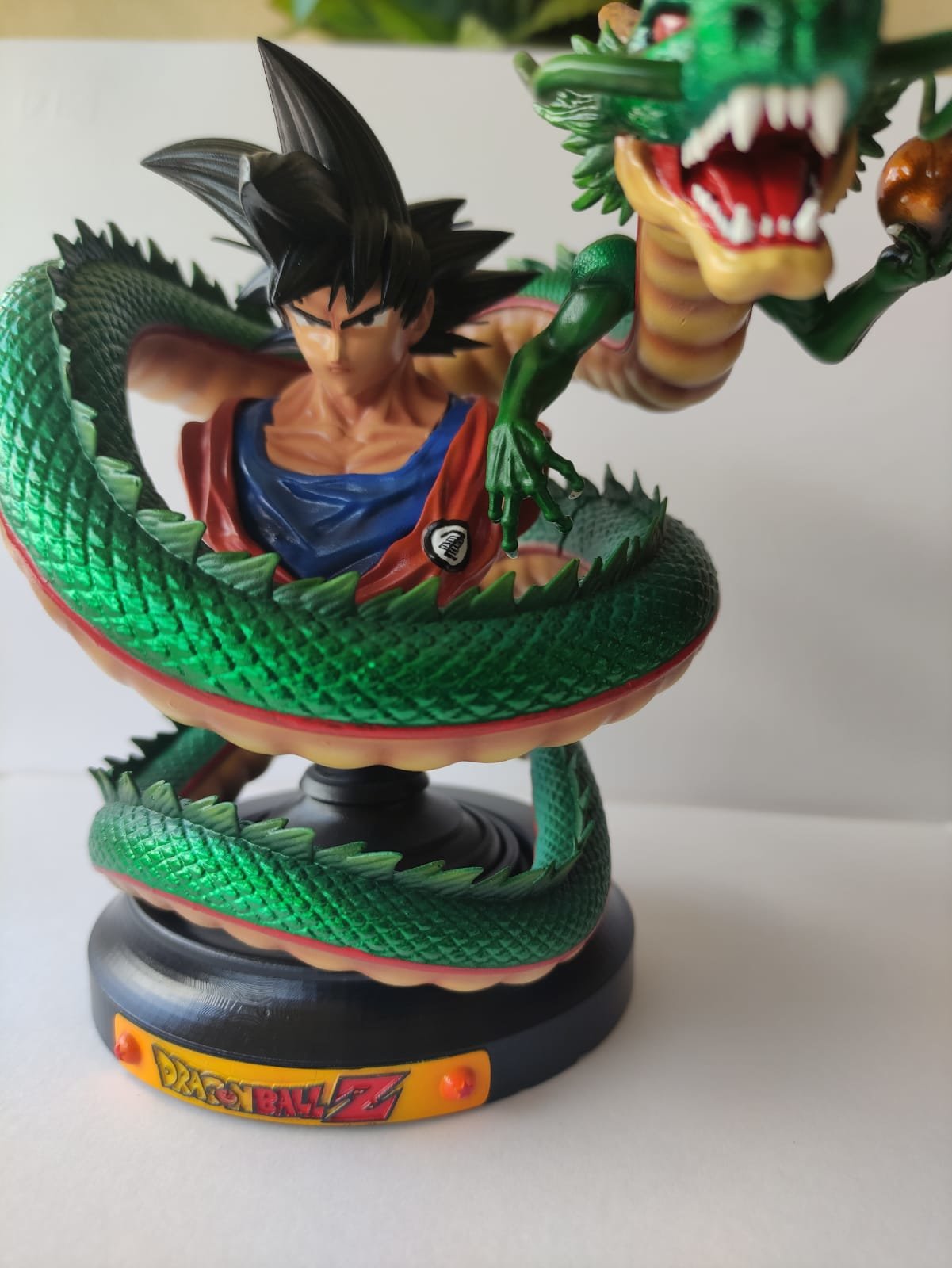 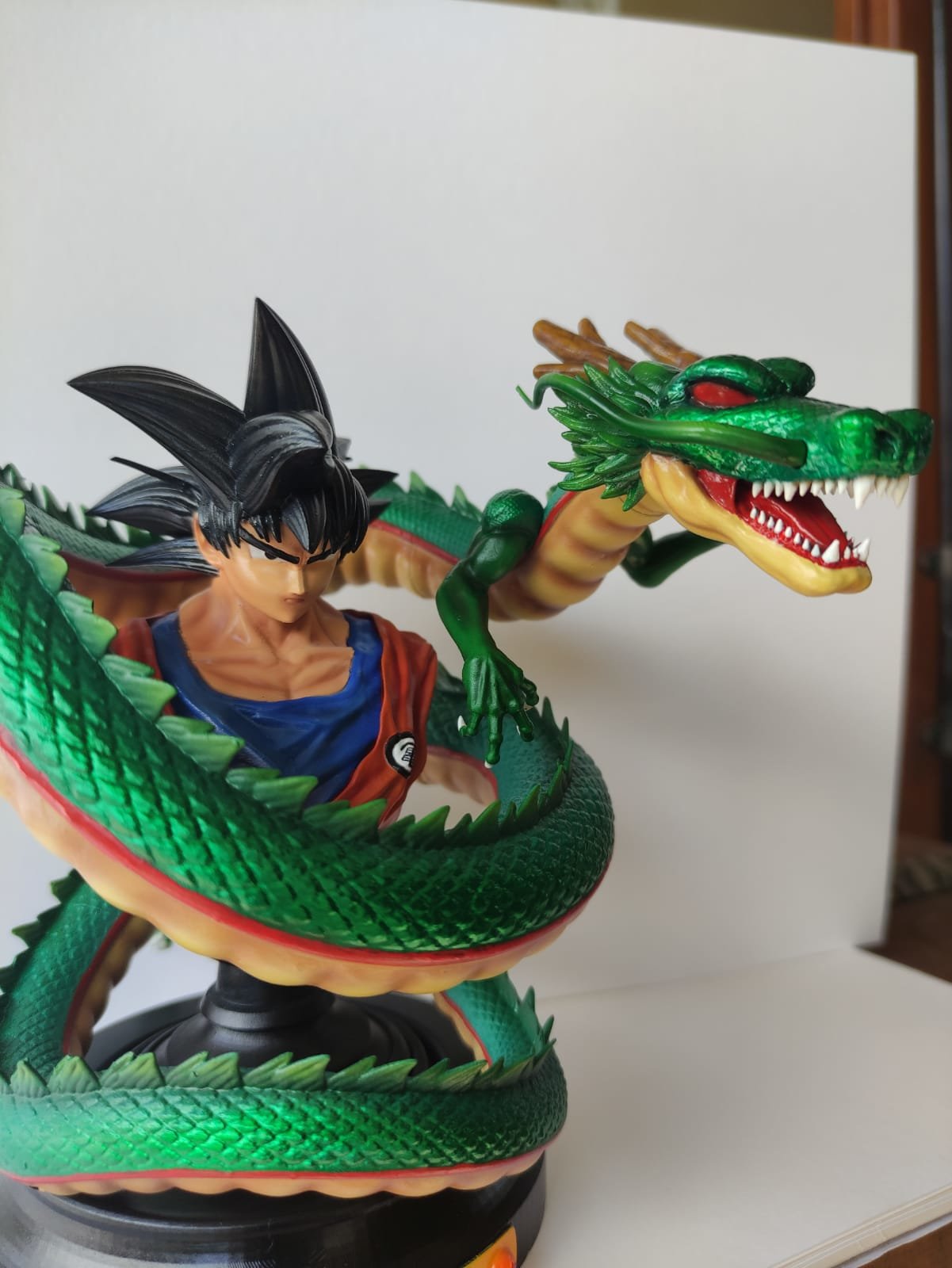 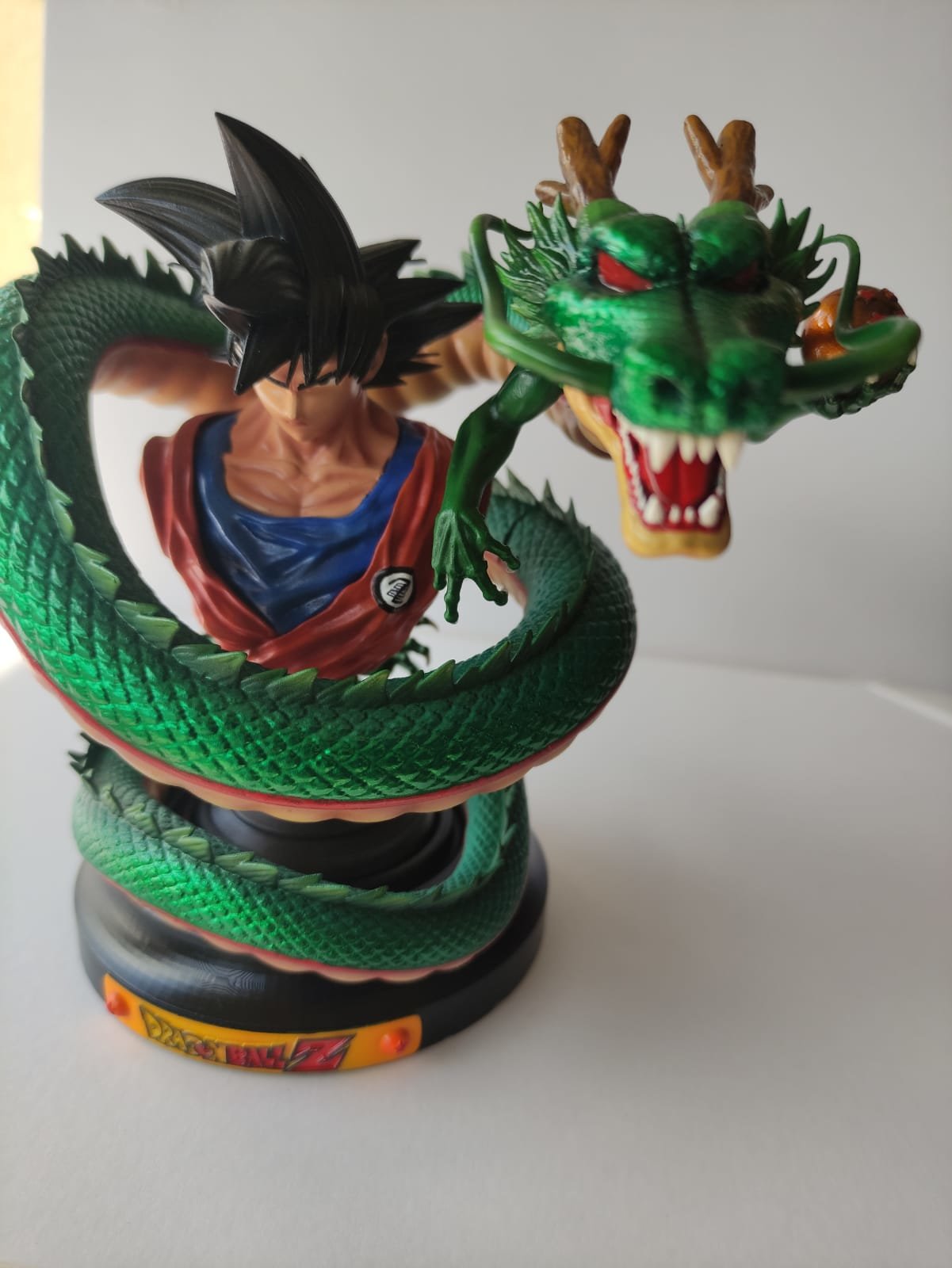 And finally we start to see my statues colored by someone! The Goku with Shenron you see in these images was made by Roberto Piersanti! Bravo!

Hi! This is my 3D sculpt of the most famous Saiyan ever, Son Goku from the manga and anime DRAGONBALL. The file is made in Blender 3D. The file is sliced, printed and tested and is 1:10 scale. The digital sculpture is ready to print and sliced into 3 parts and with keying to make it easier to print and paint. Also with Presupported Chitubox files! If you want send me pictures of your print to share I will be happy! Hope you like!

Hi! This is my 3D sculpt of the most famous Dragon ever, Shenron from the manga and anime DRAGONBALL. The file is made in Blender 3D and is sliced, printed and tested. The digital sculpture is ready to print and sliced into 14 parts and with keying to make it easier to print and paint. Also with Presupported Chitubox files! It's designed to fit perfectly with the Goku Bust also here on CGTRADER : https://www.cgtrader.com/3d-print-models/miniatures/figurines/dragonball-son-goku-bust-stl-3d-printing-file If you want send me pictures of your print to share I will be happy! Hope you like!

From Wiki: Shénlóng (神龍, Shenron, lit. Dragon God), Shenron in Funimation's anime dub, also known as the Eternal Dragon in the Ocean and Funimation dubs and as the Dragon God in the Harmony Gold dub, is the wish-granting dragon summoned when all seven of Earth's Dragon Balls are gathered together.[ch. 1] Throughout the series, several rules on the Dragon Balls' use and limitations on Shenron's power are explained. After the wish is granted the balls scatter across the planet, turn to stone, are useless for a year, and cannot be detected by Bulma's Dragon Radar.[ch. 1, 20] The Dragon Balls also become useless if Shenron is destroyed; in this case, they must be recreated by their creator. If their creator is killed,[ch. 148, 165, 194] Shenron cannot bestow a wish that exceeds the power of his creator, such as Shenron being unable to destroy the Saiyans before they came to earth.[ch. 243] Midway through the series, the Dragon Balls are revealed to have been created by the Namekians, Earth's Kami being one of them.[ch. 242] A person can only be brought back to life once, and only if that person did not die of natural causes.[ch. 218, 321] Earth is without Dragon Balls for a period when Kami re-merges with Piccolo until Dende takes over the position of God.[ch. 355, 360, 393] When Dende recreates Earth's Dragon Balls, he makes it so that two wishes can be made at once, but each wish is still capable of resurrecting multiple individuals immediately.

Dragon Ball (Japanese: ドラゴンボール, Hepburn: Doragon Bōru) is a Japanese media franchise created by Akira Toriyama in 1984. The initial manga, written and illustrated by Toriyama, was serialized in Weekly Shōnen Jump from 1984 to 1995, with the 519 individual chapters collected into 42 tankōbon volumes by its publisher Shueisha. Dragon Ball was originally inspired by the classical 16th-century Chinese novel Journey to the West, combined with elements of Hong Kong martial arts films. The series follows the adventures of protagonist Son Goku from his childhood through adulthood as he trains in martial arts. He spends his childhood far from civilization until he meets a teen girl named Bulma, who encourages him to join her quest in exploring the world in search of the seven orbs known as the Dragon Balls, which summon a wish-granting dragon when gathered. Along his journey, Goku makes several other friends, becomes a family man, discovers his alien heritage, and battles a wide variety of villains, many of whom also seek the Dragon Balls. Toriyama's manga was adapted and divided into two anime series produced by Toei Animation: Dragon Ball and Dragon Ball Z, which together were broadcast in Japan from 1986 to 1996. Additionally, the studio has developed 20 animated feature films and three television specials, as well as two anime sequel series titled Dragon Ball GT (1996–1997) and Dragon Ball Super (2015–2018). From 2009 to 2015, a revised version of Dragon Ball Z aired in Japan under the title Dragon Ball Kai, as a recut that follows the manga's story more faithfully by removing most of the material featured exclusively in the anime. Several companies have developed various types of merchandising based on the series leading to a large media franchise that includes films, both animated and live-action, collectible trading card games, numerous action figures, along with several collections of soundtracks and numerous video games. Dragon Ball has become one of the highest-grossing media franchises of all time. Since its release, Dragon Ball has become one of the most successful manga and anime series of all time, with the manga sold in over 40 countries and the anime broadcast in more than 80 countries. The manga's 42 collected tankōbon volumes have sold over 160 million copies in Japan, and are estimated to have sold more than 250–300 million copies worldwide, making it two best-selling manga series in history. Reviewers have praised the art, characterization, and humour of the story. It is widely regarded as one of the greatest and most influential manga series ever made, with many manga artists citing Dragon Ball as a source of inspiration for their own now-popular works. The anime, particularly Dragon Ball Z, is also highly popular around the world and is considered one of the most influential in boosting the popularity of Japanese animation in Western culture. It has had a considerable impact on global popular culture, referenced by and inspiring numerous artists, athletes, celebrities, filmmakers, musicians and writers around the world.