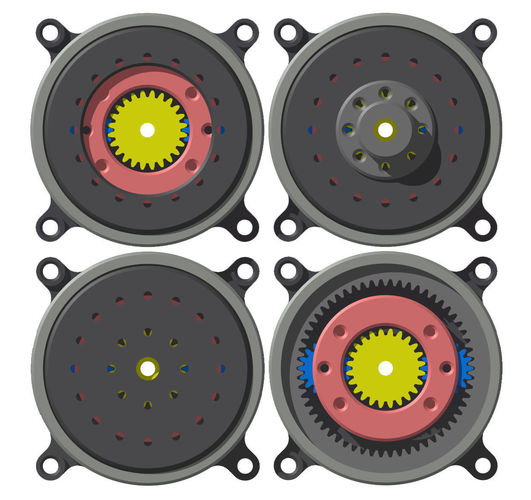 This reducer is designed to be mounted on top of a NEMA 17 standard stepper motor. It has a high reduction ratio of 96.6667:1 in a very small package (only 20mm tall, and 80mm in diameter). In the tests i concluded, reducer didn't show even the slightest signs of backlash, but i can't guarantee it won't be an issue after prolonged use. This design also eliminates the wobble of the output which can be observed in 3D printed harmonic drives, and it's required to remove that wobble if the device is to be used in an actual mechanism which needs to perform accurately/precisely. If you encounter any problems, please contact me so i can improve the design based on your input.

Ratio calculation: i = (1 + (fixed_T / sun_T)) * (output_T / 2) i = (1+(56/24)) * (58/2) = 96.6667 Functioning principle explanation: This system consists of 2 rings with inside gearing, one is fixed and the second is the output ring. Both planet gears are driven by the sun gear, and engage both rings at the same time.Each revolution of the planet carrier (around it's own axis) will move the outer ring by 2 teeth (in the direction of the motor). This is achieved by adding 2 extra teeth to the output ring, and then re-adjusting the outer ring module to align it's pitch diameter to be aproximately the same as one of the fixed ring. This must be done to ensure proper teeth meshing.

Versions: There is an educational version included, which will allow you to observe what's actually happening in the reducer

There is also an alternative version of the output ring which allows for easier mounting of a M8 bolt as the output.

Additional parts: You will need additional screws to assemble this reducer. Most of the holes will accept M3 screws. Few different lenghts are needed. The most important screws you should install are those that go through the planet pin on the planet carrier; it relies on the screw to strenghthen the pin. You can get away with excluding some of the screws, but use common sense.

NOTES: If you plan to use this as a part of a functional mechanism, use plenty of grease or other lubricant! Do NOT load the output ring directly! Use an external bearing to prevent wear of the reducer! You can however use this as a direct source of torque without using external bearings, just keep in mind to not exceed the ratio*motor holding torque, or else the drive could slip (it could slip under much lower torque, but it's hard for me to test it out because of the high ratio; it's more likely that the plastic will deform before the drive slips)