19 Cyberpunk Images That Will Inspire You To Hack And Model

High tech, low life - this is the mantra of cyberpunk. Where megacorporations run wild and dark cities are showered in bright neon lights, where machine melds with man and monomolecular katanas abound, there’s cyberpunk. This genre is more than three decades old and has seen several of its predictions come to pass. Maybe we’ll start using internet with our 3D avatars jumping around the cyberspace, just like our ancestors imagined it. Thanks, VR! But while the bionic future is not exactly here yet, it certainly has a hold on the imagination of 3D artists everywhere. Here are some cyberpunk pieces to inspire you to model on the cutting edge. Watch your back, model for VR, conserve polys, and never, ever, cut a deal with a spambot.

Blade Runner - Scene from a Movie Competition by Ilya Nedyal

Let us start with a classic. Blade Runner is the cyberpunk movie, even if it has a heaping dose of sci-fi - our grim and gritty genre doesn't oft feature "attack ships on fire off the shoulder of Orion." It's a fitting tribute that captures the atmosphere of the movie well, as well showing one of the memorable flying cars. 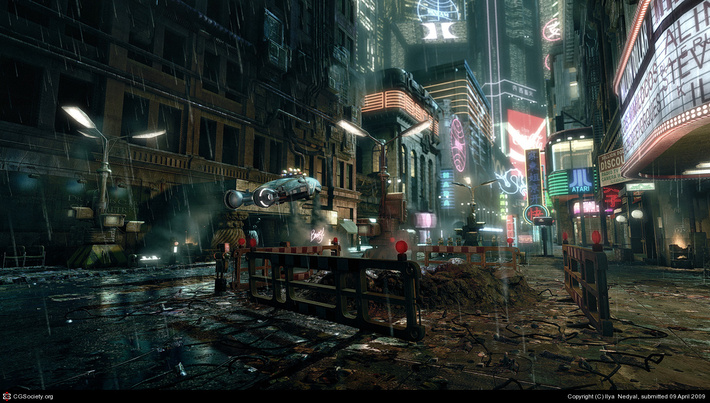 Where could this high-tech slum exist? Would it be in some south-east Asian port city or just hugging a river delta somewhere warm? What do the floating things do? How often is the peace shattered by dueling corporate agents? Who knows! 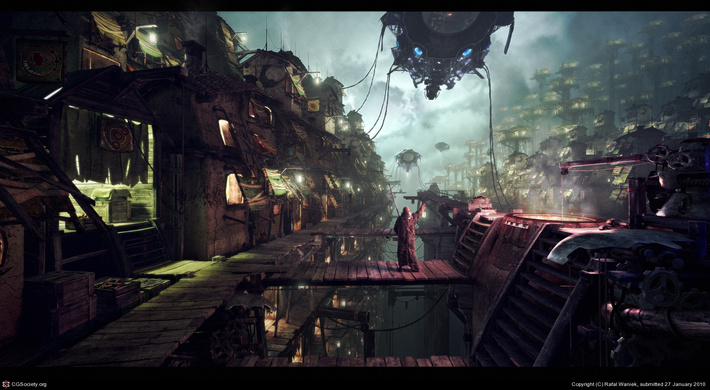 Cyberpunk is one of the two great, well, cyberpunk RPGs, the other being the magically-suffused Shadowrun. This is one of the finishing scenes from the solitary trailer we got for the upcoming Cyberpunk 2077 game by CD Projekt Red. We can't wait for it to come out, so we could replace out arms with chainsaw blades.

Ever wondered how the city looks when you finally get out of those dark and neon-lit slumps? This just might be it, the rich living in a nigh sci-fi utopia, their heads literally in the clouds. It's like a very dark version of Jetsons!

What a fitting name for this presumably shadowy operator who is more-likely-than-not a protagonist. As we all know, antagonists have more radical haircuts, rarely use blue and almost always have their masks on. 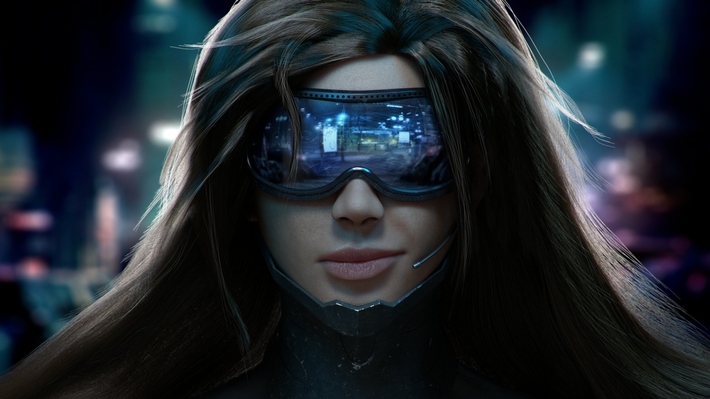 The only way is up... or down. In any case, cyberpunk loves cities that spread vertically as well as horizontally. What can be more grim and futuristic than a megacity where the rich literally live above the poor? 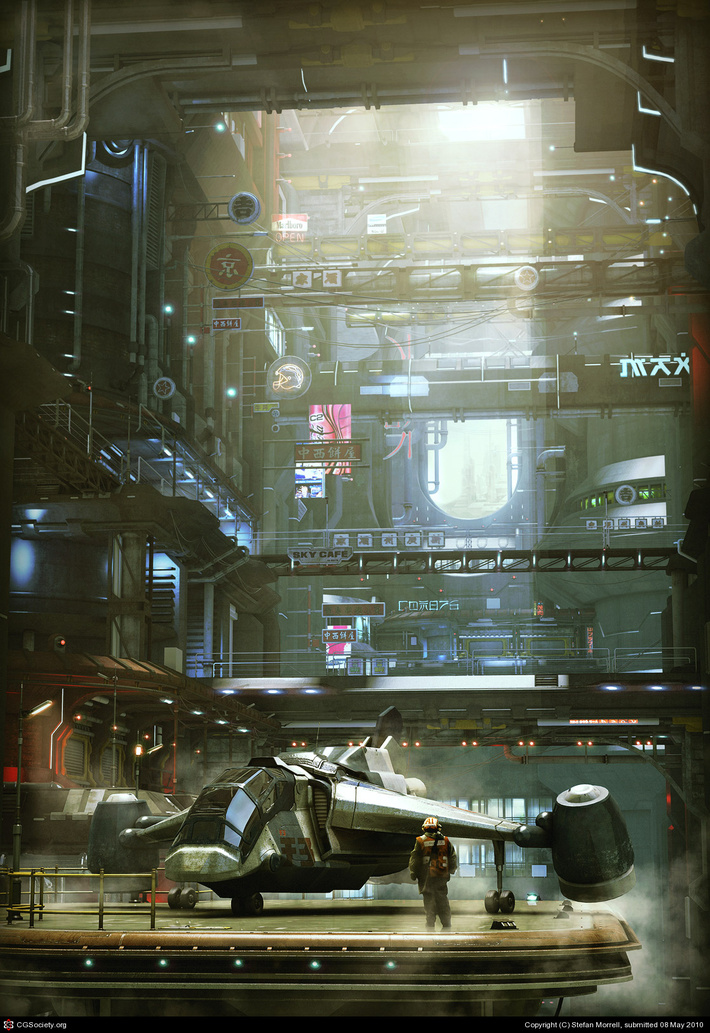 This cyberpunk interpretation of the comic book character Deathstroke fits right in. Carrying a Japanese motif and all high tech, he could fit into one of Renraku's Red Samurai teams. He'll be cutting unlucky thieves in half in no time. 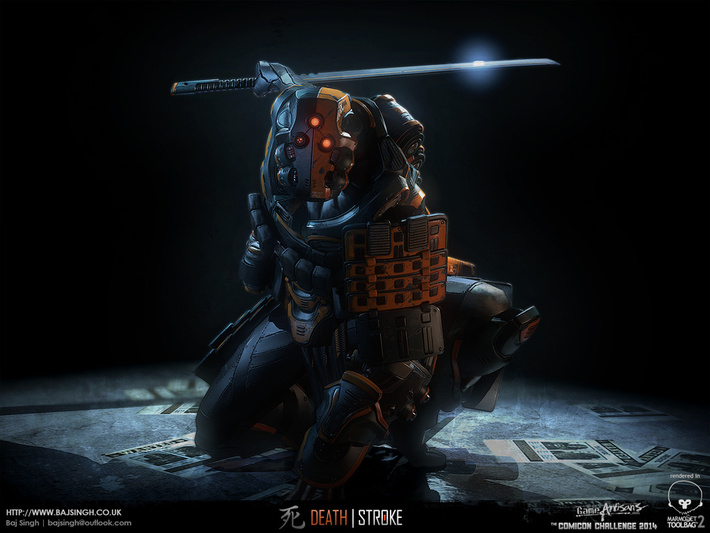 Maybe this android is feeling human. Maybe it can feel how it's being disassembled. It's cyberpunk, so it can be both. 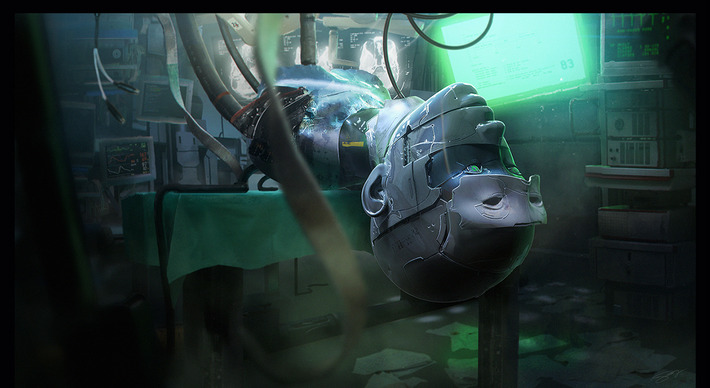 Who goes to work without their exoskeleton? Victims, that's who: corporate drones and crunchy scientists that often get in the way of high-intensity future shootouts. 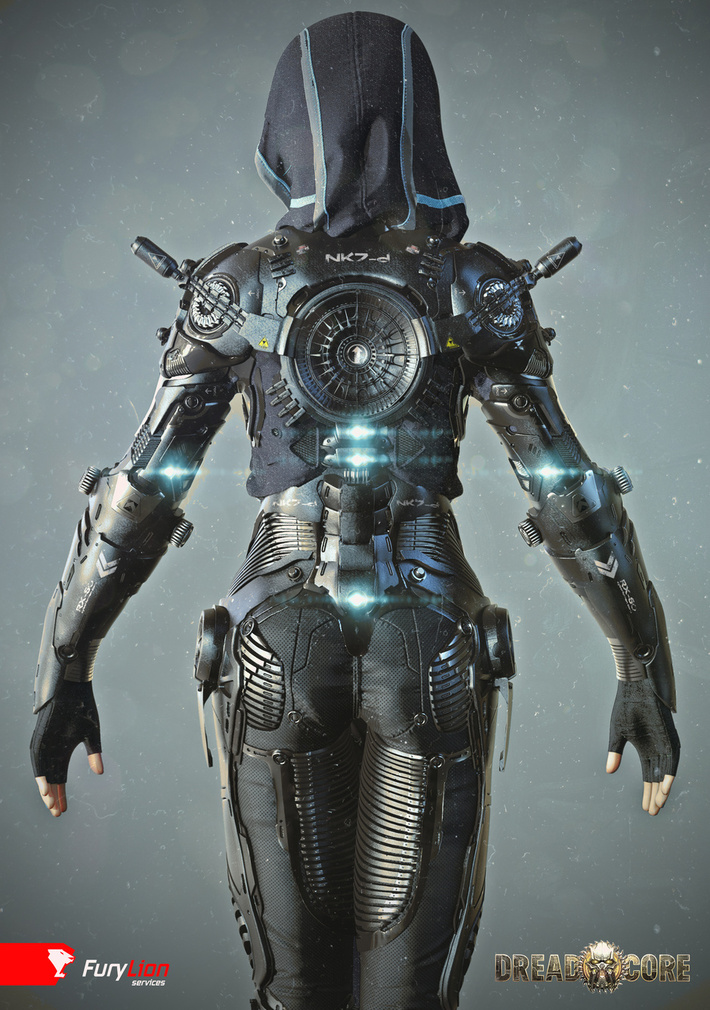 You can't go cyberpunk without exploring the seedier elements of our technological future. Then again, "Joybot" is too mechanical to be a simple sex bot and the visuals are too Space Age to make it anything other than an artistic curio.

Cyberpunk was inseparable from the vision of an ascendant Japan, powerful and energetic, yet still mindful of their cultural heritage. This drinking den serving the sararimen of some Japanese megacity is truly fitting.

In the future, there will be robots, but more to the point, we will be living in tiny, extremely technological apartments with lights and screens everywhere. The only thing will remain unchanged is our passion for cats. A future without cats is no future I want to live in. 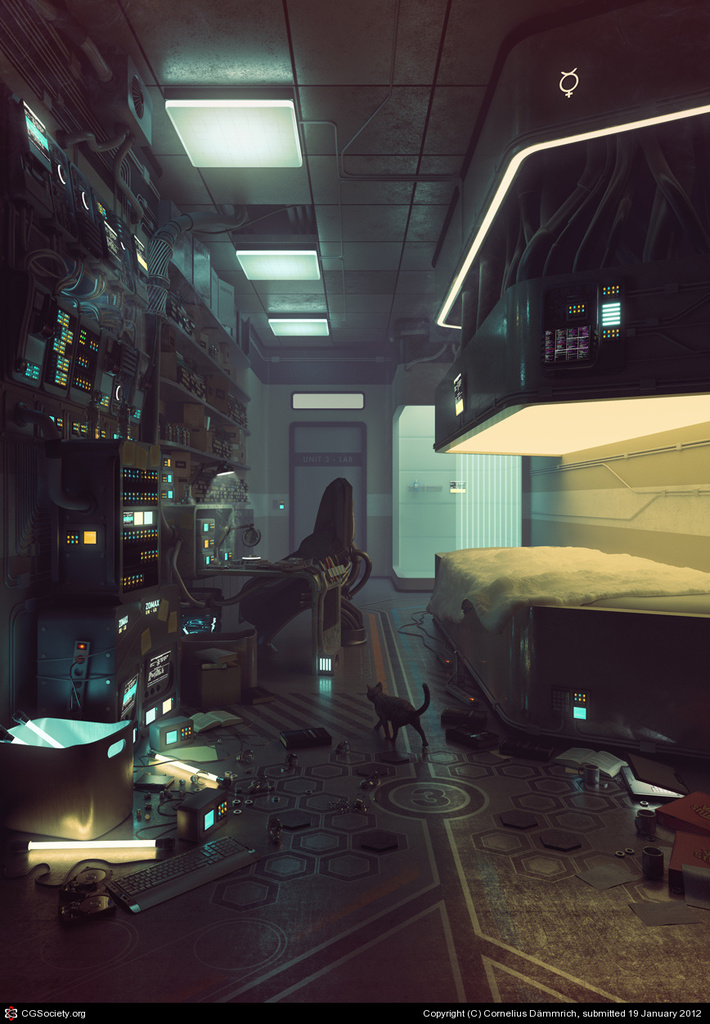 Monkey On Your Back by Par Tingstrom

"Bite my shiny metal ass, meatbag!" How can you expect robots not to say it when you furnish them with titano-alloy butt cheeks? 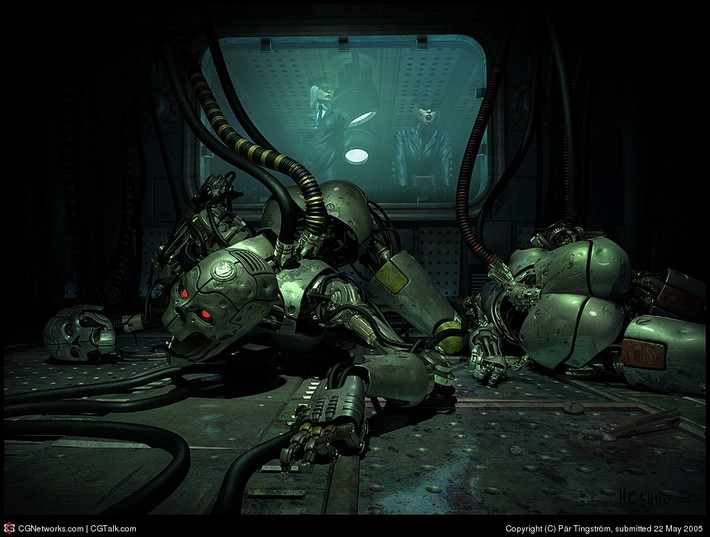 It's true that nobody can jack your future car if you place it on a hydraulic platform, but that only leaves it open for parkour ruffians that rule the roofs. May I suggest some autoturrets? 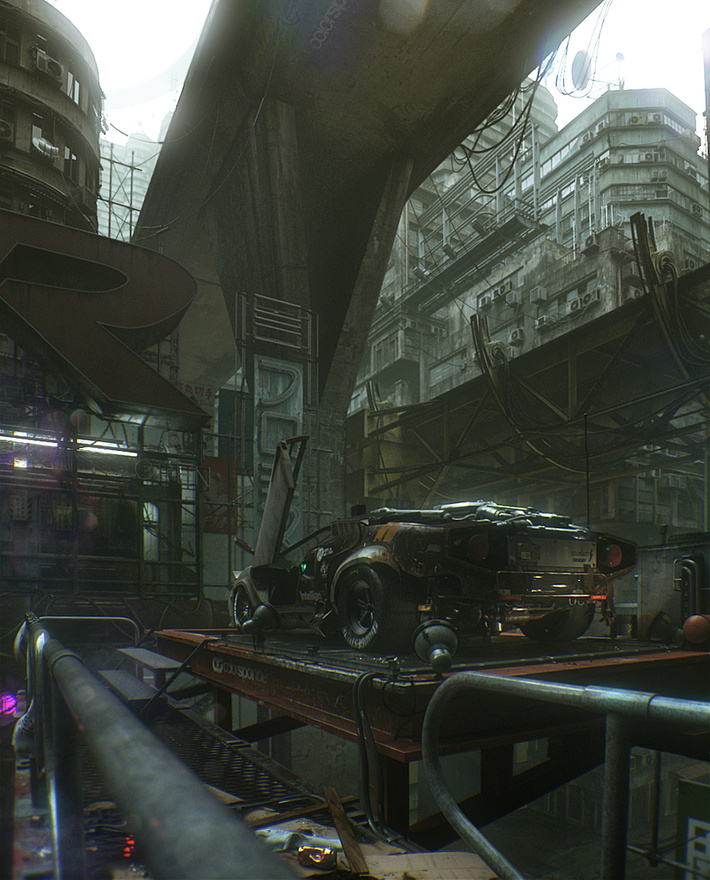 One day, our cities will spread and take over the oceans. Then, even off-shore platforms won't be safe. Anything can become a high-tech slum if you're patient! 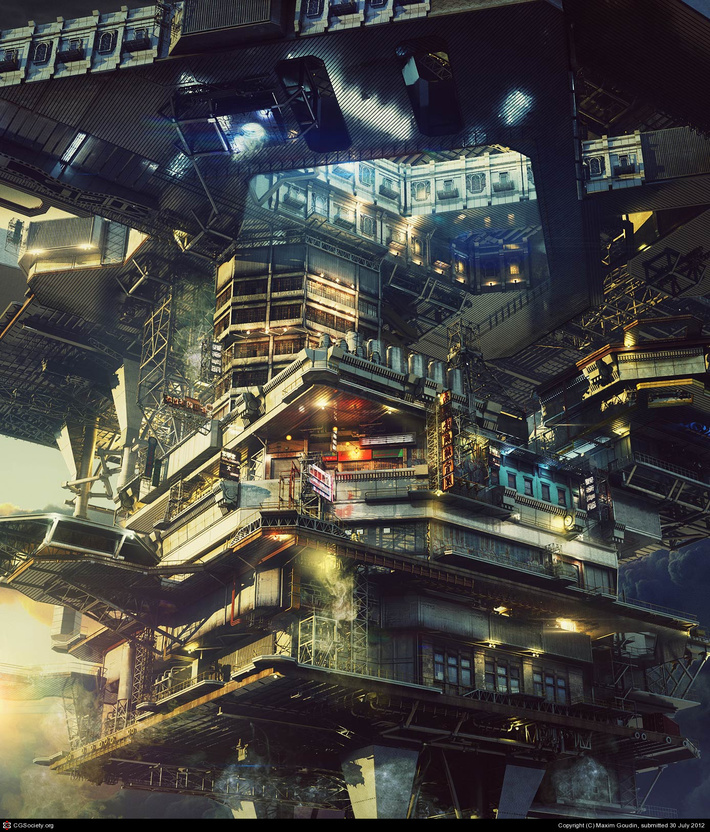 On Constant Watch by Stefan Morrell

"Beep-boop, tiny human. State your identification or be terminated. You have sixty seconds to comply" 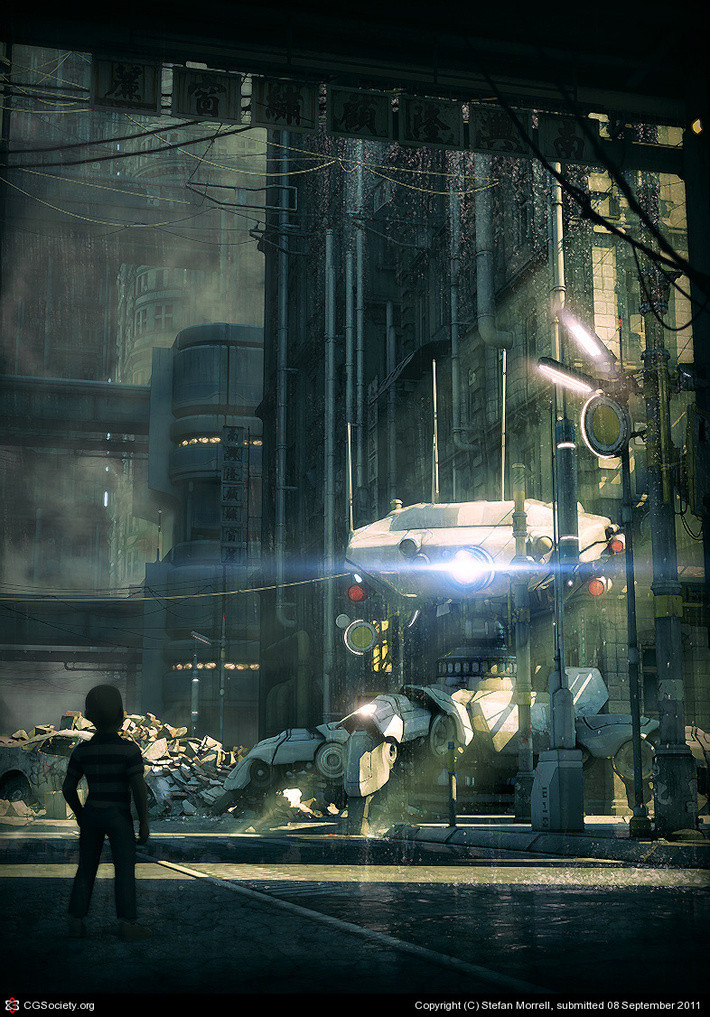 The Soldier of Meteora by equinoz

No such thing as cyberpunk without high-tech future soldiers or bionic ninjas! 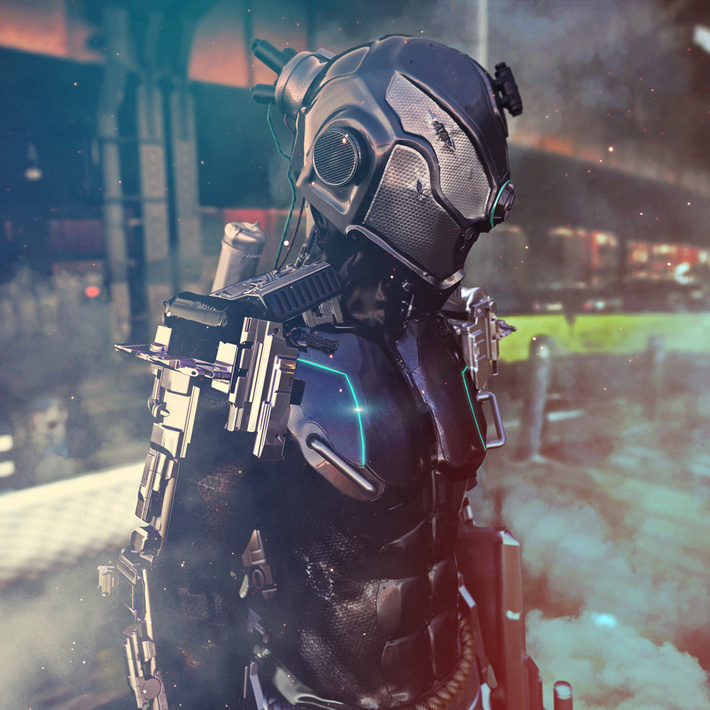 The Gold Light Of Morning by Stefan Morrell

How would the world of Blade Runner look in the morning, without the overwhelming darkness? Well, here's a hint! 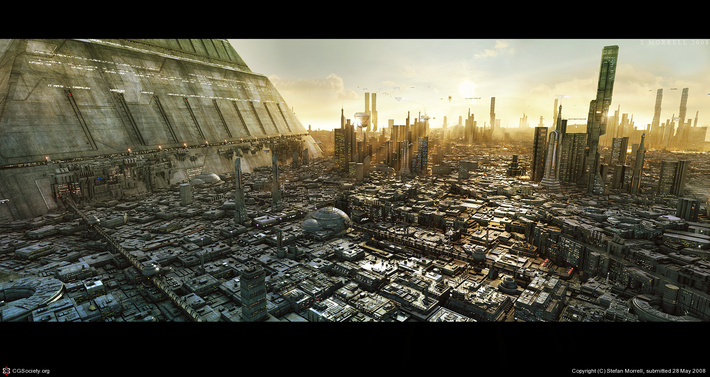 Here's another guy ready to do some black ops and wetwork, maybe even secure some experimental wetware! 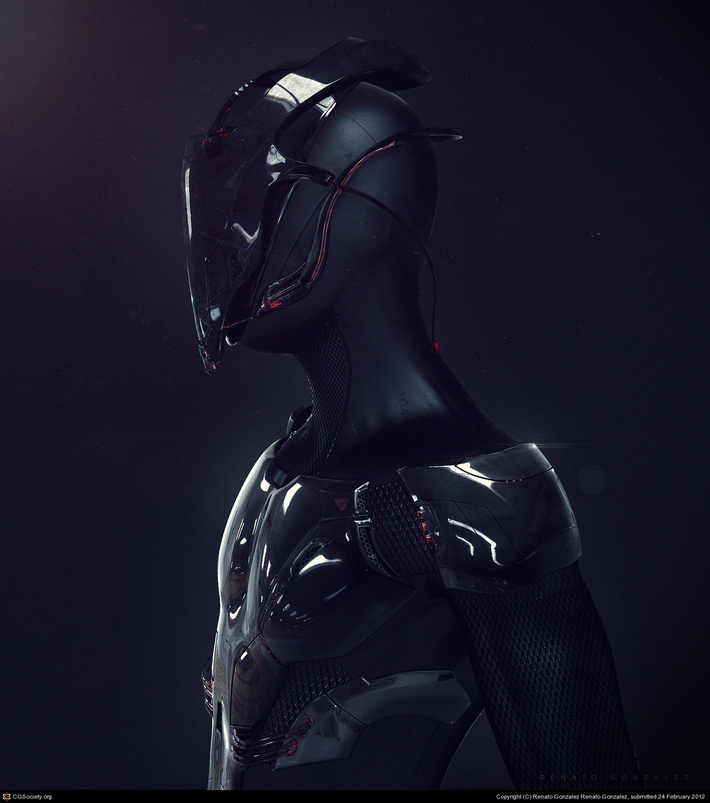