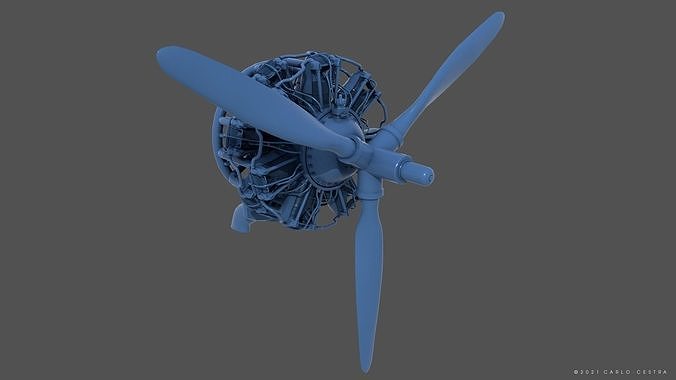 OVERVIEW - The R-1830 Twin Wasp is an American aircraft engine widely used in the 1930s and 1940s. Produced by Pratt & Whitney, it is a two-row, 14-cylinder, air-cooled radial design with seven cylinders on a row. A total of 173618 R-1830 engines were built. It was used in the Grumman F4F Wildcat fighter and in many other ww2 aircrafts, including two of the most-produced aircraft ever built, the four-engined B-24 heavy bomber and twin-engined DC-3 transport, more R-1830 Twin Wasps may have been built than any other aviation piston engine in history.

GENERAL INFO -The model was created based on photos and historical documentation.

The model is divided into 7 single parts, but some of these need to be printed several times (cylinders and propeller blades). The number of copies to print is indicated in the STL file name (i.e. cylinder back (x7).stl means 7 copies for it).

Please use FBX or OBJ as assembling reference.

It's recommendable to use a resin 3D printer with a good print resolution. Once printed, you need to assemble, glue, putty if needed and paint all the parts.

The total lenght of the final assembled model is about 28cm.

You can resize all the parts to get different scale.

For any difficult or question I am always available to give you assistance.

I would be very grateful if any of my models could help you to do a great job.