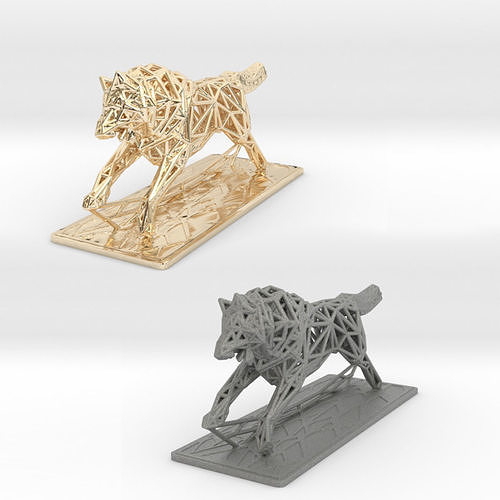 The Arctic wolf (Canis lupus arctos), also known as the white wolf or polar wolf, is a subspecies of grey wolf native to Canada's Queen Elizabeth Islands, from Melville Island to Ellesmere Island. It is also found in Alaska and Greenland. It is a medium-sized subspecies, distinguished from the northwestern wolf by its smaller size, its whiter colouration, its narrower braincase,and larger carnassials. Since 1930, there has been a progressive reduction in size in Arctic wolf skulls, which is likely the result of wolf-dog hybridization. In 1935, the British zoologist Reginald Pocock attributed the subspecies name Canis lupus arctos (Arctic wolf) to a specimen from Melville Island in the Queen Elizabeth Islands, Canada. He wrote that similar wolves could be found on Ellesmere Island. He also attributed the name Canis lupus orion to a Greenland wolf specimen from Cape York, northwest Greenland.[7] Both wolves are recognized as separate subspecies of Canis lupus in the taxonomic authority Mammal Species of the World (2005).[8]

One study using autosomal microsatellite DNA and Mitochondrial DNA (mtDNA) data indicate that the Arctic wolf has no unique haplotypes which suggests that its colonization of the Arctic Archipelago from the North American mainland was relatively recent, and thus not sufficient to warrant subspecies status.[9] However, the research of Chambers et al. (2012) that dismissed the Arctic wolf's genetic integrity became controversial, forcing the United States Fish and Wildlife Service (USFWS) to commission a peer review of it, known as the National Center for Ecological Analysis and Synthesis (NCEAS) (2014).[10] This peer review highlighted numerous flaws in the research such as the erroneous merging of the coastal British Columbia island wolves with the inland Canis lupus nubilus as well as suggesting that grey wolves never lived in the eastern third of the US, and thus concluded unanimously that the Chambers' review is not accepted as consensus scientific opinion or best available science.