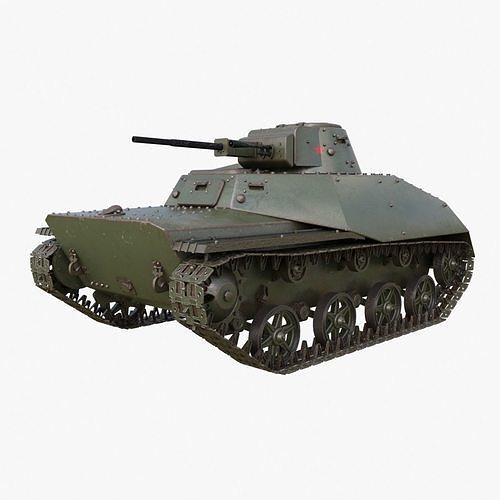 Tank T 40 Soviet Mental Ray The T-40 amphibious scout tank was an amphibious light tank used by the Soviet Union during World War II. It was armed with one 12.7 mm (0.5 in) DShK machine gun. It was one of the few tanks that could ford a river without a bridge.

It was primarily intended to equip reconnaissance units. A land-based version of the T-40, the T-40S, was produced, although was later redesignated the T-60. The T-60 was cheaper, simpler, better-armed, and could fulfill most of the same roles, so T-40 production was halted.

The vehicle served mainly in Operation Barbarossa and the defense of Moscow, and it was rarely seen after that point, although it was used in Soviet training schools until 1946. A total of 44 examples of the type were later fitted with Katyusha rocket launchers, firing 82 mm unguided rockets from a 24-rail launcher.

The 3d model is made in 3ds max 2016 and rendering in mental ray, only press Rendering for generating your image.

Is present the layer and group for manager easy the part for the model.

Note: The background image is not included.