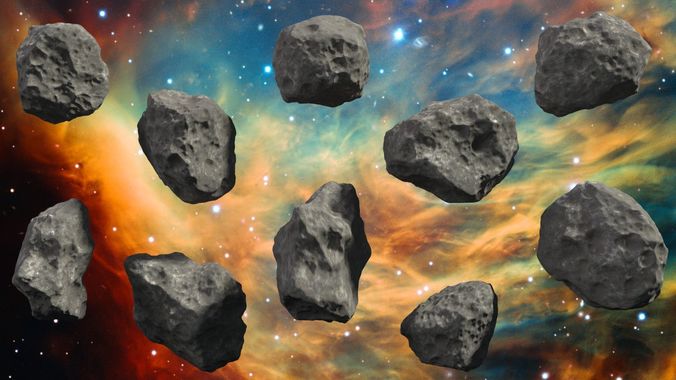 Set of 10 unique variations of ultra realistic Asteroids, available in both High and Low Polygon meshes with 8K textures for each asteroid. Background and HDRi are included.

Asteroids are small, airless rocky worlds revolving around the sun that are too small to be called planets. They are also known as planetoids or minor planets. In total, the mass of all the asteroids is less than that of Earth's moon. But despite their size, asteroids can be dangerous. Many have hit Earth in the past, and more will crash into our planet in the future. That's one reason scientists study asteroids and are eager to learn more about their numbers, orbits and physical characteristics. If an asteroid is headed our way, we want to know that.

Most asteroids lie in a vast ring between the orbits of Mars and Jupiter. This main asteroid belt holds more than 200 asteroids larger than 60 miles (100 kilometers) in diameter. Scientists estimate the asteroid belt also contains more than 750,000 asteroids larger than three-fifths of a mile (1 km) in diameter and millions of smaller ones. Not everything in the main belt is an asteroid — for instance, comets have recently been discovered there, and Ceres, once thought of only as an asteroid, is now also considered a dwarf planet.

Many asteroids lie outside the main belt. For instance, a number of asteroids called Trojans lie along Jupiter's orbital path. Three groups — Atens, Amors, and Apollos — known as near-Earth asteroids orbit in the inner solar system and sometimes cross the path of Mars and Earth.