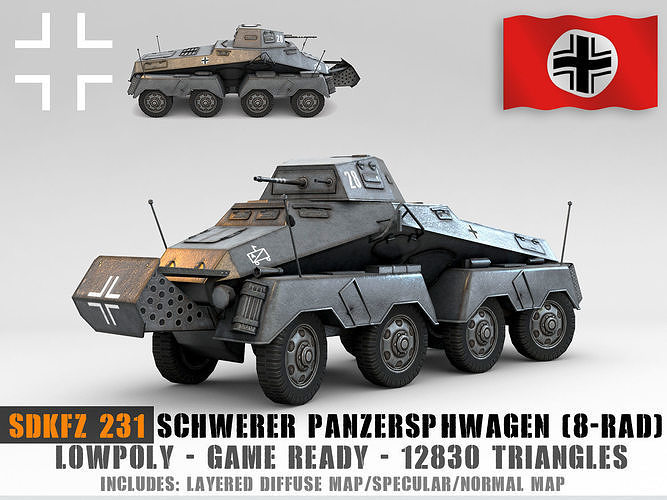 Texture designed for scaling - great for mobile games. Textures can be used in unlit mode

The Schwere Panzerspähwagen (heavy reconnaissance armored car) concept was first developed into several road wheeled vehicles tested at the secret Kazan proving grounds, in the USSR, following an agreement between the two countries. The first model developed as a series, following the interim Reichswehr Kfz.13, was based on a June 1929 specification asking for an armored car especially designed for scouting operations, with a good endurance, range and off-road capabilities. The first prototype was based on an eight-wheeled chassis, deemed to be too complicated for production -and too costly. A new vehicle was developed instead and mass-produced from 1932 to 1935 as the Sd.Kfz.231, a six wheeled vehicle with a completely armored sloped bodywork, armed with a full revolving turret housing a 20 mm (0.79 in) QF gun coupled with a Mauser MG 13 or, later, MG 34. It was basically a reinforced Büssing-Nag truck chassis, complete with the truck engine. Later on, a Magirus engine, slightly more powerful (70 bhp), was mounted instead. 123 were built in total. The radio version (Fu) was called Sd.Kfz.232 by the Waffenamt (28 built). But this model, popular for propaganda purposes, was nevertheless too heavy for its engine and off-road capabilities were rather limited. It was consequently dropped after June 1940 and phased out, joining various driver training schools.