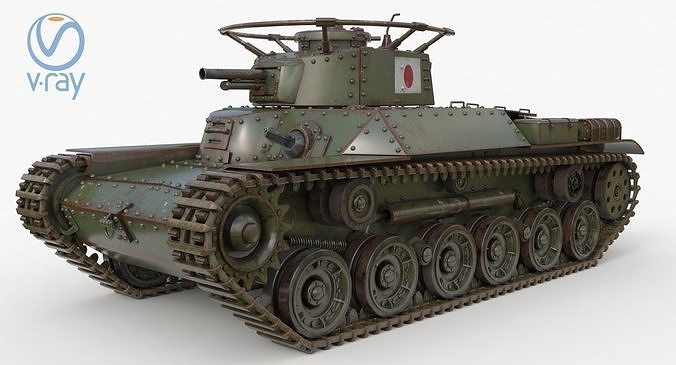 The Type 97 Chi-Ha ( Kynana-shiki ch-sensha Chi-ha) was a medium tank used by the Imperial Japanese Army during the Second Sino-Japanese War, the Battles of Khalkhin Gol against the Soviet Union, and the Second World War. It was the most widely produced Japanese medium tank of World War II

The 57 mm main gun, designed for infantry support, was a carry over from the 1933 Type 89 medium tank. The suspension was derived from the Type 95 Ha-Go light tank, but used six road wheels instead of four. The 170 hp Mitsubishi air cooled diesel engine was a capable tank engine in 1938

The Type 97's low silhouette and semicircular radio antenna on the turret distinguished the tank from its contemporaries. After 1941, the tank was less effective than most Allied tank designs. In 1942, a new version of the Chi-Ha was produced with a larger three-man turret, and a high-velocity Type 1 47 mm tank gun. It was designated the Type 97-Kai or Type 97 Shinhoto Chi-Ha.

The 3d model is made in 3ds max 2016 and rendering in Vray, only press Rendering for generate your immage.