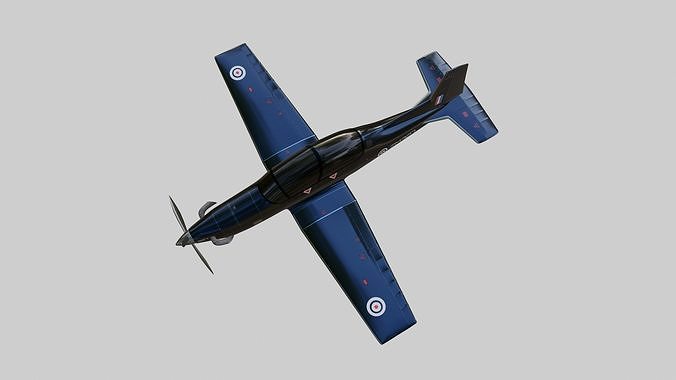 Perfect for use in games and simulation projects.

Under Raytheon ownership, Beech developed the T-6A Texan II from the Pilatus PC-9, in response to the long-running US Joint Primary Aircraft Training System (JPATS) requirement to replace the Cessna T-37. After reworking a Pilatus-supplied airframe, Beech flew a production standard Texan II, known then as the Beech Mk II, for the first time in December 1992. On June 22, 1995, Beech was announced the winner of the JPATS competition and the Texan II began re-equipping USAF flying training squadrons in May 2000.

The Texan II name recalls the North American T-6 Texan of World War II, a type used extensively by the RAF and Royal Canadian Air Force as the Harvard. When the T-6A-1 was developed as the CT-156 for the NATO Flying Training in Canada programme, it was appropriately named Harvard II. Subsequent variants include the T-6B for the US Navy and T-6C export version.

Chosen to supply a Tucano replacement under UK MFTS, Affinity is sourcing ten T-6C Texan II aircraft from Beechcraft, which is now a Textron company. The first aircraft built against the order completed its maiden flight in May and visited the UK to appear at the Royal International Air Tattoo in July.

The Texan T MK1 (Texan T1) will be stationed at RAF Valley alongside the Hawk T2. Training on the new turboprop is expected to begin early in 2019.

Formats include: 3DS MAX, DXF, OBJ, FBX.Feel free to check out the other models, just click on the user name to see the complete portfolio.