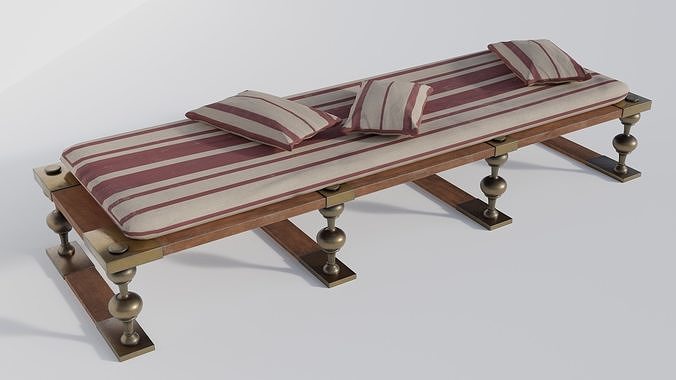 The lectus, or couch, or bed, was perhaps the most important item of Roman style furniture. Used for sleeping, sitting, relaxing or eating, the lectus was a wooden frame supporting criss crossed leather straps that held a matress stuffed, originally with straw, and later with wool or feathers. It had a headboard, and was furnished with pillows, cushions and a coverlet. The legs were often highly decorated and inlaid or plated with tortoise-shell, ivory, or the precious metals. Mention is made even of frames of solid silver. The coverings were often made of the finest fabrics, dyed in the most brilliant colors, and worked with figures of gold. Primarily used for relaxing and socializing in the living areas, the lectus also formed the basis of Roman style bedroom furniture. Replica of an original 1899 black and white in-text wood engraving of a Roman dining couch of the type found at the ruins of Pompeii, Italy. The couch was made from a wooden frame and fitted with bronze mountings. The divan or bench hadn’t any headboard and could be used for much more people. Could be combined in angle with more divans, making angle seats around the table.
Historically accurate game ready asset modeled in Blender and high quality PBR (Diffuse/Metallic/Roughness/Normal_OpenGL) textures in Substance Painter at 4k 2k and 1k resolution and subdivision ready for different LOD implementations, at FBX and OBJ and .blend files to work with any 3D software.