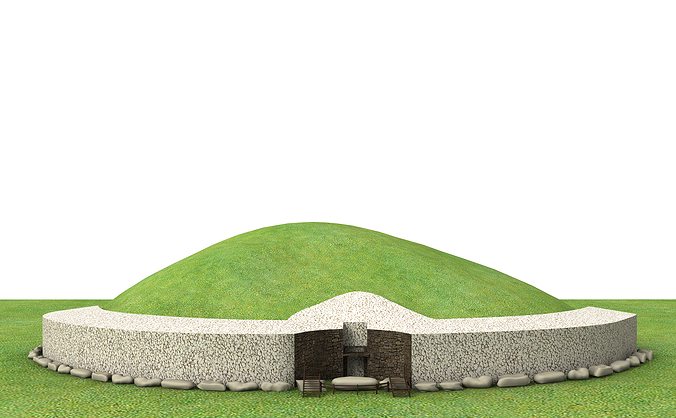 With your purchase you receive the 3D building model as DAE, 3DS, C4D and SKP for immediate download. (see details)

Newgrange is an enormous burial mound in Ireland. It is situated in the Irish country of Meath, on the Boyne River. The tomb is a so-called passage tomb with a cruciform chamber and a corbelled vault. This type is rare, but has also been found on the islands of Anglesey and Orkney.

Newgrange (Irish: Sí an Bhrú or Brú na Bóinne) is a prehistoric monument in County Meath, Ireland, located 8 kilometres (5.0 mi) west of Drogheda on the north side of the River Boyne.[3] It was built during the Neolithic period, around 3200 BC, making it older than Stonehenge and the Egyptian pyramids.

The site consists of a large circular mound with an inner stone passageway and chambers. Human bones and possible grave goods or votive offerings were found in these chambers. The mound has a retaining wall at the front, made mostly of white quartz cobblestones, and it is ringed by engraved kerbstones. Many of the larger stones of Newgrange are covered in megalithic art. The mound is also ringed by a stone circle. Some of the material that makes up the monument came from as far away as the Mournes and Wicklow Mountains. There is no agreement about what the site was used for, but it is believed that it had religious significance. Its entrance is aligned with the rising sun on the winter solstice, when sunlight shines through a 'roofbox' and floods the inner chamber. Several other passage tombs in Ireland are aligned with solstices and equinoxes, and Cairn G at Carrowkeel has a similar 'roofbox'.[4][5] Newgrange also shares many similarities with other Neolithic constructions in Western Europe, such as Maeshowe in Orkney, Scotland[6] and Bryn Celli Ddu in Wales. It is the most famous monument within the Neolithic Brú na Bóinne complex, alongside the similar passage tomb mounds of Knowth and Dowth, and as such is a part of the Brú na Bóinne UNESCO World Heritage Site. Newgrange consists of approximately 200,000 tonnes of rock and other materials. It is 85 metres (279 ft) wide at its widest point.[7]

After its initial use, Newgrange was sealed for several millennia. It continued to be featured prominently in Irish mythology and folklore, in which it is said to be a dwelling of the deities, particularly The Dagda and his son Aengus. Antiquarians first began its study in the seventeenth century, and archaeological excavations took place at the site in the years that followed. Archaeologist Michael J. O'Kelly led the most extensive of these and also reconstructed the frontage of the site in the 1970s, a reconstruction that is controversial and disputed.[8] Newgrange is a popular tourist site and, according to the archaeologist Colin Renfrew, is unhesitatingly regarded by the prehistorian as the great national monument of Ireland and as one of the most important megalithic structures in Europe.