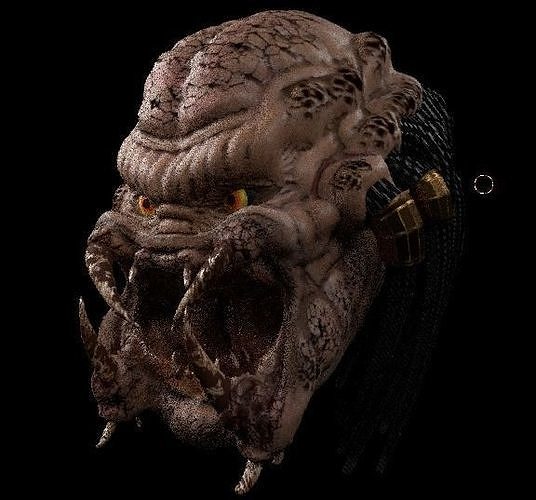 This is an inspired model from predator The Predator is a 2018 American science fiction action horror film directed by Shane Black and written by Black and Fred Dekker. It is the fourth installment in the Predator franchise. Black had a supporting role in the original film, while John Davis returns as producer from the first three installments. Starring Boyd Holbrook, Trevante Rhodes, Jacob Tremblay, Keegan-Michael Key, Olivia Munn, Thomas Jane, Alfie Allen, and Sterling K. Brown, it follows a group of PTSD-afflicted soldiers and a scientist who must team up to fight off an invading pair of Predators and discover their plans for mankind.

Talks of a new Predator installment began in June 2014, with Black being confirmed as writer and director; much of the cast signed on between October 2016 and January 2017. Filming took place in British Columbia from February to June 2017, with the climax being re-written and re-shot in July 2018 following poor test screenings.

The Predator premiered at the Toronto International Film Festival on September 6, 2018, and was theatrically released in the United States on September 14, 2018, by 20th Century Fox, in IMAX and Dolby Cinema, as well as standard formats. The Rotten Tomatoes critical consensus calls it another missed opportunity. It grossed $160.5 million worldwide on a $88 million production budget, becoming the highest-grossing film in the franchise.

The Plot: A Predator ship crash-lands on Earth. U.S. Army Ranger sniper Quinn McKenna and his team are attacked by the Predator while on a hostage retrieval mission. McKenna incapacitates the Predator and has parts of its armor sent off by mail to prove the existence of extraterrestrial life. At the behest of government agent Will Traeger, McKenna is captured and held for examination. Traeger also takes the Predator to a lab for experimentation and observation, recruiting evolutionary biologist Casey Bracket to study it. Bracket discovers that the Predator contains human DNA as part of his genetic makeup and her primary task is to discover how. The Predator awakens, breaks out of its restraints and kills both the lab workers and armed guards, but spares Bracket, the only unarmed person, before escaping.

McKenna is bussed off with a group of other government captives, including former Marines Nebraska Williams, Coyle, Baxley, Lynch, and Army helicopter pilot Nettles. Witnessing the Predator's escape from the lab, they hijack the bus. Taking Bracket with them, they head over to McKenna's estranged wife, Emily, where he expects to find the Predator armor he mailed off. However, Rory, McKenna's autistic son, has gone trick-or-treating in the armor in hopes of avoiding detection from bullies.

McKenna and the others find his son just in time to stop a pair of Predator hounds from ambushing the boy. McKenna kills one of them by shooting a grenade into its mouth, causing it to explode. Nebraska unintentionally lobotomizes the other dog after shooting it in the head. The Predator chases them into a nearby school, and they start to give the Predator's armor back when another, much larger and more powerful Predator arrives and engages the first in combat. The group flees, and the second Predator kills the first before setting out to retrieve the lost technology.

Bracket concludes that the Predators are attempting to improve themselves with the DNA of humans and, presumably, other planets' inhabitants. She mentions that the larger Predator generates an exoskeleton that renders him highly resistant to damage, even from weapons of Predator technology. The team flees to an abandoned barn, but Traeger finds and captures them, and shares his theory that the Predators anticipate that climate change will end their ability to retrieve human DNA for further hybridization, and as such are scrambling to retrieve samples before it is too late. Seeing Rory drawing a map to the spaceship, Traeger takes the boy away to go to the ship. The team escapes and goes after him with the help of the now docile, brain-damaged Predator hound.

Once all have arrived at the crashed ship, the second Predator arrives, kills Lynch, and explains through translation software that it will destroy the ship to keep it out of their hands and then give them all a head start before it hunts them down. The Predator quickly kills several of Traeger's soldiers while mortally wounding both Baxley and Coyle, who then euthanise each other. Traeger tries to use a Predator weapon on the alien but accidentally kills himself in the process.

The Predator takes Rory, recognizing his autism as an advancement in human evolution which makes him a worthwhile subject for hybridization, and flies away in his ship. McKenna, Nebraska, and Nettles land on the ship's exterior, but the Predator activates a force field that slices off Nettles' legs, and he falls off the ship to his death. Nebraska sacrifices himself and slides into the ship's turbine, causing it to crash. McKenna sneaks into the ship as it crashes and attacks the Predator. After the crash, Bracket arrives, and the three manage to overpower and kill the Predator with its own weapons. They pay their respects to their fallen comrades with trinkets representing each one before heading off.

Some time later, McKenna and Rory are seen in a science lab watching the opening of cargo found on the Predator's ship, which a scientist indicates was left behind on purpose. A piece of technology floats out and attaches itself to a lab worker, working as a transformative Predator killer suit before deactivating. Realizing the first Predator was trying to pass it on to humanity in order to make it a fair fight against the larger Predators, McKenna indicates he will be the pilot to operate the suit.