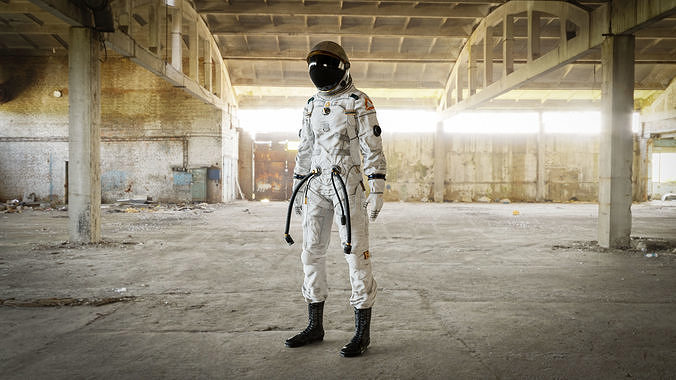 This is a reduced package of the Female Space Suit 3D Model (https://www.cgtrader.com/3d-models/character/woman/female-space-suit-3d-model). Not everyone needs a highpoly version or works with Unreal Engine. So here is a low price version of the character for your awsome renders in Blender or other software. FBX and OBJ formats are also included.

Includes 3 different texture versions: White, Yellow and Orange. The normal map was baked from a high poly sculpt. All textures are in 4K.

The character comes with a simple rig, so you can easily apply mocap animations from Mixamo, or retarget to any other animation data. The character is weightpainted so the rig holds up for most animation purposes. If you need more extreme body deformations you might have to use blend shapes. Also, if you need more realistic animations (like bendy bones for the tubes or cloth animation for the belts), you might have to adjust the rig.

• One texture set for the Suit (4K resolution)

• One texture set for the Helmet (4K resolution)

• One texture set for the Belts (4K resolution)

• One texture set for the Hardsurface details (4K resolution)

The preview images were rendered in Blender 2.83 Cycles, partly with HDRIs as background (I used the highpoly version for the renders).