Brain with Interior and Texture 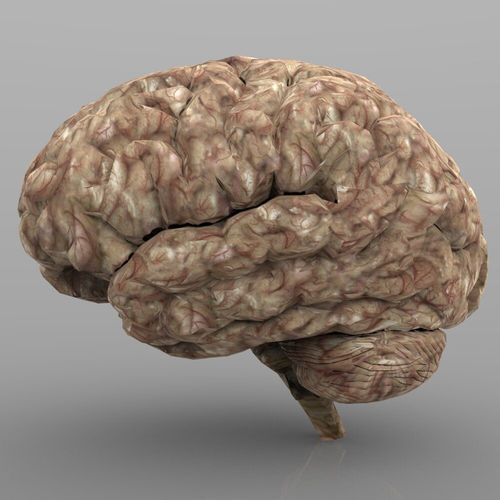 The brain is an organ that serves as the center of the nervous system in all vertebrate and most invertebrate animals. Only a few invertebrates such as sponges, jellyfish, adult sea squirts and starfish do not have a brain; diffuse or localised nerve nets are present instead. The brain is located in the head, usually close to the primary sensory organs for such senses as vision, hearing, balance, taste, and smell. The brain is the most complex organ in a vertebrate's body. In a typical human, the cerebral cortex (the largest part) is estimated to contain 15–33 billion neurons, each connected by synapses to several thousand other neurons. These neurons communicate with one another by means of long protoplasmic fibers called axons, which carry trains of signal pulses called action potentials to distant parts of the brain or body targeting specific recipient cells.

Physiologically, the function of the brain is to exert centralized control over the other organs of the body. The brain acts on the rest of the body both by generating patterns of muscle activity and by driving the secretion of chemicals called hormones. This centralized control allows rapid and coordinated responses to changes in the environment. Some basic types of responsiveness such as reflexes can be mediated by the spinal cord or peripheral ganglia, but sophisticated purposeful control of behavior based on complex sensory input requires the information integrating capabilities of a centralized brain.

Product Features: - Approx 26,097 polygons. - Made entirely with 3 and 4 point polygons. - Includes group information, which your software should interpret as separate parts, which includes: -- Cerebral cortex, left and right parietal lobe, left and right frontal lobes, and more. - These can be hidden or shown, depending on the needs of your scene. - Although the model includes these parts, this version of the model is not rigged. - This version includes an mtl file, which your software program should read to colorize the model. - The model is UV mapped and textures (in tif format) are included.

This model is fully licensed for use in games and apps.

to Brain with Interior and Texture