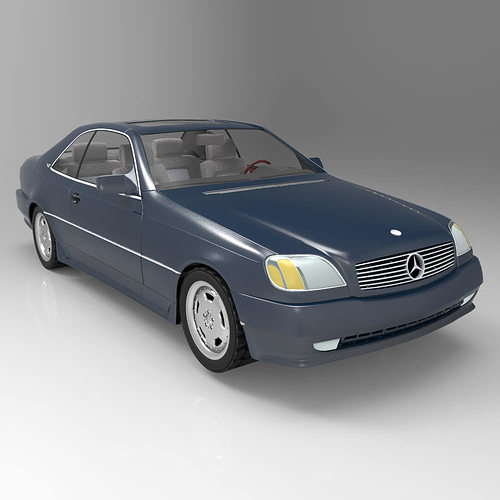 The Mercedes-Benz S-Class is a series of large sedans produced by Mercedes-Benz, a division of Daimler AG. The S-Class, a product of nine lines of Mercedes-Benz models dating since the mid-1950s, is the world's best-selling luxury flagship sedan. As the foremost model in the Mercedes-Benz lineup, the S-Class has debuted many of the company's latest innovations, including advanced safety systems, drivetrain technologies, and interior features. Notably, the S-Class introduced the first airbag supplemental restraint systems, seatbelt pretensioners, and electronic stability control.

The Mercedes-Benz W140 is a car that was manufactured by the German automotive marque Mercedes-Benz. The car premiered at the Geneva Motor Show in March 1991, with the first examples rolling off the production line on August 6 1991. Short (SE) and long (SEL) wheelbase sedans were offered initially, as well as the coupé (SEC) body style from January 1992. Like all Mercedes-Benz lines, the W140 S-Class was rationalized in 1994 using the new "letter-first" nomenclature, dropping the named distinction between body styles. The SE/SEL/SEC cars were renamed the S-Class, with alphanumerical designations inverted. For example the both 500SE and 500SEL became S500 regardless of wheelbase length. The W140 series S-Class was superseded by the W220 S-Class in 1999 after an eight year production run, and C215 CL-Class for 2000.

Product Features (Studio Max):
The product contains one resolution of the model, which is rigged for animation.
The model is highly detailed and textured.

This model is a 3DMax model, saved in version 8 as a MAX file, and requires 3DMax. It does not include any other formats to allow it to be opened in any other software. The model is rigged where appropriate, and mapped and textured.