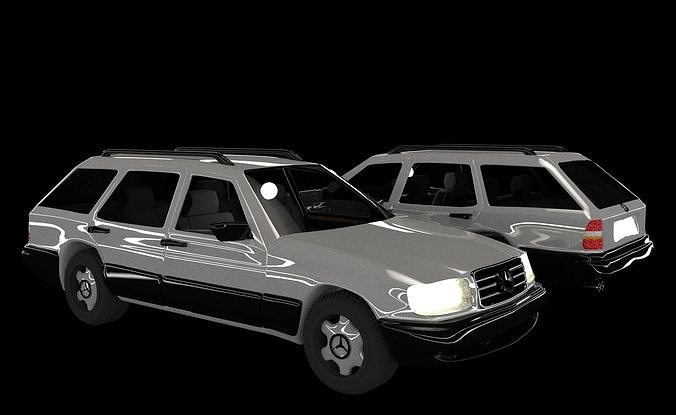 Mercedes-Benz E class W124 Kombi model 3D W124 is the Mercedes-Benz internal chassis-designation for the 1984/85 to 1995/96 version of the Mercedes-Benz E-Class, as well as the first generation to be officially referred to as E-Class. The W124 models replaced the W123 models after 1985 and were succeeded by the W210 E-Class after 1995. In North America, the W124 was launched in early November 1985 as a 1986 model and sold through the 1995 model year, through November 7, 1995. Series production began at the beginning of November 1984, with press reveal taking place on Monday, November 26, 1984 in Sevilla, Spain, with customer deliveries and European market launch starting in January 1985 The W124 was a mid-sized vehicle platform, which entered planning in the autumn of 1976 under development Hans Scherenberg. In July 1977, the W124 program officially began, with R&D commencing work under newly appointed Werner Breitschwerdt. In April 1978, decisions were made to base it on the Mercedes-Benz W201 model program. By April 1979, a package plan was completed for the program, laying out the guidelines of the project. During the winter of 1980–1981, the final exterior for the W124 program was completed, chosen as the leading proposal by design director Bruno Sacco, and approved by the board of management in early 1981. By mid-1982, the first prototypes reflective of the production design, were assembled and sent to testing. In March 1984, pilot production commenced and development of the sedan concluded with engineering sign-off. Front suspension used a separate spring and damper with a rubber top mount. The rear suspension of the W124 featured the Mercedes multi-link axle introduced in 1982 with the Mercedes W201 and which is now standard on many modern cars. Estate cars (and optionally, saloons and coupés) had Citroen-like rear self-leveling suspension with suspension struts rather than shock absorbers, gas-filled suspension spheres to provide damping and an under bonnet pressurizing pump. Unlike the traditional Citroën application Mercedes opted for a fixed ride height and employed rear coil springs to maintain the static ride height when parked.

The R129 SL roadster was based on the W124 platform, and in return, W124 was later equipped with one of the roadster's engines, creating the 500 E. The available formats are: -.FBX -.DAE -.3DS -.STL -.BLEND All the textures used will be available to be placed with ease. To create the materials we used the cycles engine, in blender. The nodes are simple, a shader is used, BSDF principista, and then they connect with the textures. If you need help after downloading the design, do not hesitate to let us know