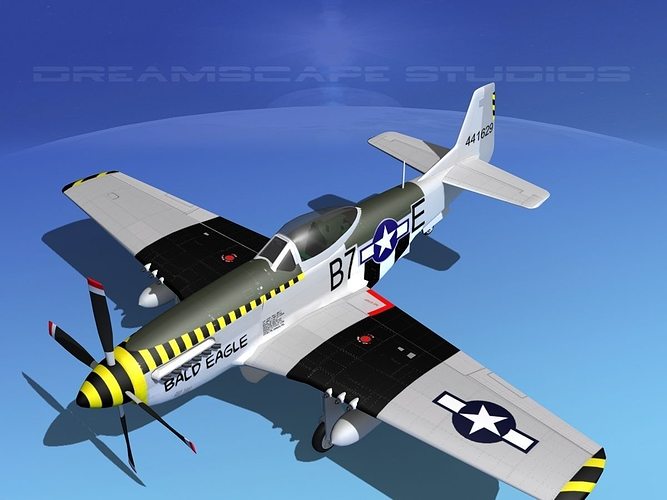 This Mustang model was originally developed for the Discovery Channel. It is built very near to scale and is fully textured. This model is detailed to include cockpit. The engine, cowlings, mounts, seat and radio equipment are modeled. Controls, instrument panels and many cranks and switches are modeled in the cockpit. Many features are animateable including ailerons, flaps, rudder, elevators, main and tail landing gear and doors, propeller, and the cockpit canopy opens.

The later upgrade replaced many modeled parts, the textures for the wings and rebuilt the cockpit to include the additional details. Engine, oil reservoir, mounting arms, mounts, oil cleaner intake duct, fuel lines and spark plugs are also modeled. The cowling panels or either side can be removed to reveal the engine. These panels are just like what is found on the real Mustang allowing more realistic views of the aircraft undergoing maintenance. Landing gear features were added and 6 x 50 caliber machine guns, spar, wing fuel tank are included in the wings. You see the rear fuel tank in the fuselage behind the seat. It is provided in different model formats.

The Fuselage Fuel Tank is modeled as well as a nicely done set of electrical equipment and radios behind the pilots seat. The cockpit aiming sight system is also modeled.

The P-51D was the most successful aircraft during World War II. They were flown by the US Army Air Force, Royal Air Force and the Royal Australian Air Forces during the war and with other nations and ANG units until the 1960s These aircraft saw service with the USAF until after the Korean War.. Many are still flying and racing around the world.