Posted in Scene about 3 years ago
by 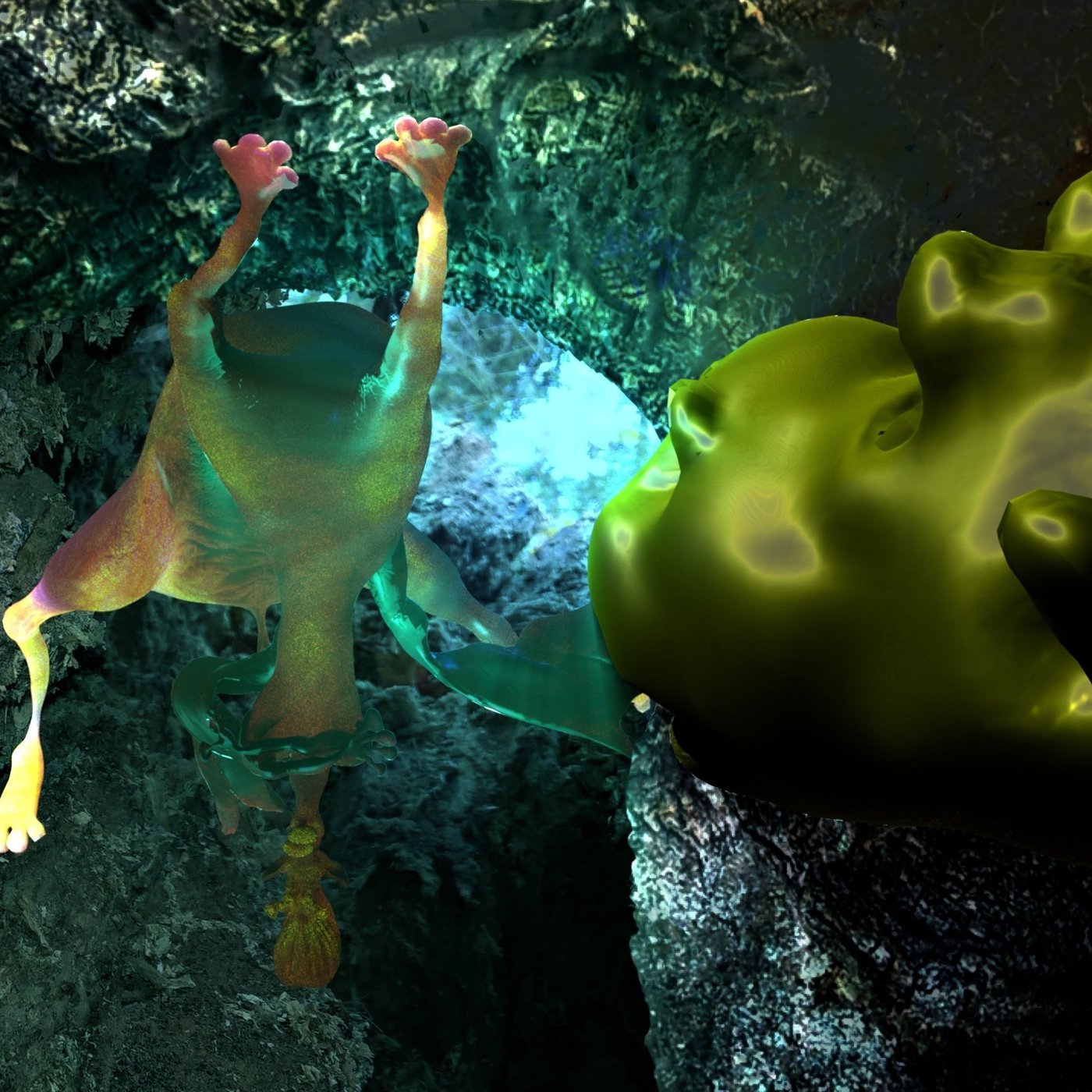 It all began in a non-existent secret laboratory. From the depth of space, a sample of soil was delivered to the laboratory. Scientists have experimented a lot, and then, in order not to throw out, the soil was placed in the aquarium for the newt. In addition to the newt, the aquarium was inhabited by many microorganisms. One of them grew on the glass. Gradually, he became smarter and understood much. He understood his name, people called him Kelp. Since there were only scientists around, and Yasha, there was nobody to show a good example. Kelp grew rapidly, developing from the laboratory assistant to the professor.
People disappeared somewhere. The professor and the newt used to live on land. The aquarium dried up, but no one filled the new water. With boredom the newt Yasha worked as a monument to himself (he did not get the present, but wanted very much). And he helped Kelp in his countless experiments. At their disposal was the most perfect equipment, and any rubbish forgotten by people.
Professor Kelp confirmed the theory: the existence of microscopic galaxies. And the fact that ours is infinitesimal in comparison with others. The smaller the size, the faster all processes. The rupture of the heap of soil, the professor found a microscopic galaxy. And in it was a planet inhabited by the inhabitants. Their life was much faster. Every second passed several generations. Kelp copied the identity of the inhabitant of a small planet and with the help of artificial intelligence recreated a copy in his computer.
"How can we establish contact with an alien" - asked Yasha.
"I still have an electronic copy of his identity. Let's try to talk to him. " answered the professor.
"And he will not go mad?" - asked Yasha.
"Let the foreigner think that this is a dream, get used to it, we'll tell him everything," said Kelp…
Two strange creatures tried to wake me up.
"Stop, the download has already been completed," I shouted to them. I was surprised why I did not say I woke up? The next thought scared me: I do not remember anything!…
For some reason I knew them. They were Professor Kelp and Triton Yasha. They offered to walk to the knights. I realized that this is a dream and agreed The knights were very friendly. With cries of "kill a freak," they happily ran to me.
Yasha explained to them that I am a guest. And they, the knights, always welcome guests.The knights invited me to a safari. They pursued a wild boar. I caught him first. The boar fed me acorns. And he gave a black acorn, with which you can run on water.
We with the wild boar organized a hunt for knights, and I realized that they were running much worse. After that, I was taken to a dark dungeon. There was a shooting tournament. They shot at the ghosts. Anyway, it's impossible not to kill them. I was bored with this bacchanalia. I was worried why I do not remember anything about myself. What a strange dream. The wall of the castle trembled. The dragon crawled into the gate and licked Yasha. Triton told the dragon that he must guard the castle and go home early. Glancing back apologetically, the dragon left. Suddenly a village broke out near the castle.
"I told him, do not breathe near the fence," Yasha growled.
The knights fled in confusion, not knowing what to do? I thought: I can control this is my dream.
I imagined acquainted with the control panel of knights. I commanded them what to do. And they really did it..
The professor strolled inside the power unit, admiring the opening landscapes. Sometimes he experienced an electric shock. But this, in general, did not spoil his mood.He was glad that soon he will be able to learn a lot from an alien.
„It is strange that the subject receives information directly from food. If I could too, I probably would have been very fat.“thought Professor Kelp.
-How is our object of research, asked Kelp
"He increased his intellect. Appeared, not provided by us, skills," answered the newt
"I think that this is a manifestation of his personality. A foreigner can do something useful."said Kelp
In the computer supporting the life-support of an alien, a system error occurred. Since it was an artificial intelligence, the looping looked like a hopeless maze. Created so much delirium that the hard drive, did not have time to write it down. If this continues, then the hero will die. Kelp had to tell the aliens the whole truth.
Learning about everything I realized that I was not deceived in my worst expectations.
"The main thing is to think positively. Sad thoughts confuse the brain. In the labyrinth, they look like monsters. "- said to me professor
I passed the labyrinth. Crashing monsters and breaking the walls. I felt better, after when I thought a lot about who I am?

The announcement of the second part (if I suddenly come up with)
On many questions the answers are yes and no, very close. Perhaps we just can not choose, or we do not care. If a person is tired, distracted by something else, he simply does not pay attention to the question. In this case, our opinion can be changed
This is exactly what the dark weakness was doing.
If the dark forces doze, and someone wakes them up, then it's usually a terrible thing. But the dark weakness did not sleep. She penetrated into the general consciousness, trying to break the will of all mankind.
Learning about this, our hero decided that, better, he will participate in the filming of cartoons!