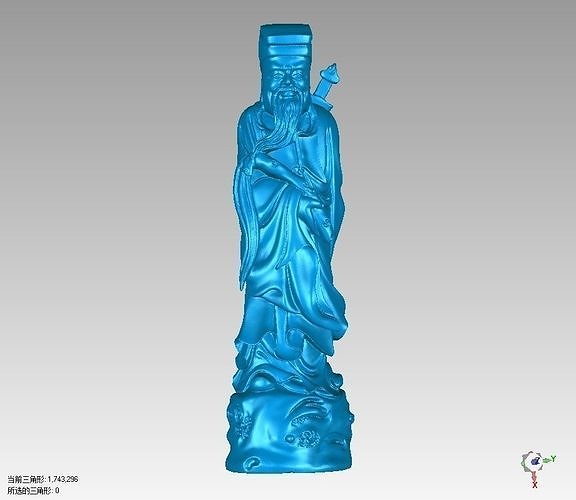 The eight immortals are the eight Taoist immortals widely spread in Chinese folklore.

LV Dongbin is the most popular among the eight immortals. In Taoism, Quanzhen Taoism regards him as the founder of Chunyang, also known as Lv Zu. LV Dongbin, a native of Hezhong Prefecture in Puzhou (now Yongle Town, Ruicheng, Shanxi Province), formerly known as LV Ho (Ho or rock), was named Dongbin, the Taoist name chunyangzi, and the Taoist name Hui Taoist. LV Dongbin, the founder of Quanzhen Taoism, is a famous immortal in Chinese legends and one of the eight immortals of Taoism, which plays an extremely important role in Taoism and folk beliefs. Quan Tang poetry and CI Zong His poems are collected in all. The jade dew in the crane forest by Luo Da Jing of the Song Dynasty, the Yi Jian Zhi by Hong Mai and the biography of Jixian It is recorded in other books. LV Dongbin was born in Xiantong, Tang Dynasty, and served as a county magistrate for two times. It is said that he was from Jiujiang. He was originally a clan of Tang Dynasty, and his surname was Li. Because he avoided the disaster after martial arts, his surname was LV, and his initial name was Shaoguang. After more than 20 years of failure in the imperial examination, he gave up the examination and traveled all over the world. Later, he was enlightened by Zhong Liquan. LV Dongbin is one of the eight immortals with the strongest human flavor. He is natural and funny, eliminating violence for the people Anliang killed demons and killed monsters. Fortunately, he was fond of wine and lust. There are legends about LV Dongbin's three plays of white peony in the world. There are many and miscellaneous legends, but it can also be seen that he should have been a scholar who admired Taoism in the Tang Dynasty, and later was deified into an immortal. Today, the yuanjiashan Lvzu temple built by Yuan Keli, the Minister of the Ming army, to sacrifice LV Dongbin is still preserved in Sui County, Henan Province.

It is said that when LV Dongbin's mother was about to give birth to him, the house smelled delicious and the sky was full of fairy music. A white crane flew down from the sky and disappeared into his mother's account. After LV Dongbin was born, he was really extraordinary. He was smart and had a diary of thousands of words. He read it by heart and spoke it by mouth. When he grew up, he was eight feet and two inches long and liked to wear a Huayang towel. When he was in his infancy, Mazu saw him and said: This son's bone looks extraordinary. He came from the dust of the city. When he met Lu zeju, he saw the clock and kept it in mind. Later, when LV Dongbin visited Lushan Mountain, he met immortal Huolong to teach TianDun sword technique. At the age of 64, you Chang'an met a feather scholar in blue and white robes in a wine shop and wrote a poem on the wall. LV Dongbin saw his ancient appearance and poetic elegance and asked his name. The feather scholar said that he was Mr. Yunfang and lived in Heling, Zhongnan mountain. He asked LV Dongbin if he would like to go with him. LV Dongbin didn't agree to go with him. This is what he wanted Mr. Yunfang is Zhong Liquan. In the evening, Zhong Liquan and LV Dongbin stayed in the wine shop together, and Zhong Liquan cooked for him alone. At this time, LV Dongbin fell asleep. He dreamed that he was the No. 1 scholar and was proud of officialdom, his children and grandchildren were full of glory. Suddenly he was convicted of a felony, his family property was confiscated, his wife and children were separated, and when he was old, he was alone, poor and down, standing alone in the wind and snow, shaking and just about to sigh After a while, Zhong Liquan suddenly woke up from a dream. Zhong Liquan's rice was not cooked yet. So Zhong Liquan wrote a poem: the Yellow sorghum is still immature, a dream of Huaxu. Lv Dongbin said in surprise, do you know my dream? Zhong Liquan said: your dream just now is full of ups and downs, thousands of honors and disgraces, and 50 is like a moment! What you get is not worth joy, what you lose is not worth sadness, and life is like a dream. Therefore, LV Dongbin made up his mind to learn Taoism with Zhong Liquan, and after the test of ten tests, he was finally granted Taoism by Zhong Liquan. LV Dongbin had Taoism and TianDun sword, cutting demons and eliminating harm for the benefit of the people. LV Dongbin was regarded by Quanzhen Taoism as one of the five ancestors of the North (Wang Xuanfu, Zhong Liquan, LV Dongbin, Liu haichan, Wang Chongyang).