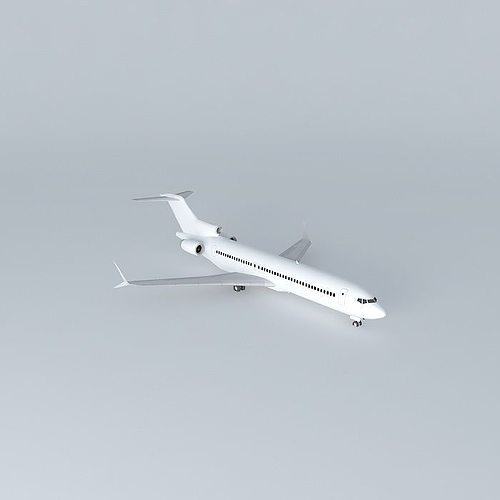 This 3D model was originally created with Sketchup 15 and then converted to all other 3D formats. Native format is .skp 3dsmax scene is 3ds Max 2016 version, rendered with Vray 3.00 Thanks to AirplaneNerd777 for the epic fail of a landing gear template. Didn’t fix them, you guys are stuck with the crappy landing gear setup. Sorry. In 2016, Boeing has announced that it is cancelling the 737-MAX program in favor of reviving the 727 program. Research showed that a T-tail design would be more efficient than a 737-esque design. Deliveries will start at the same time the 737-MAX deliveries should have started, and the price will stay the same. All 737-MAX orders are transfered to the 727X program. Three versions will be released: 727-2X, 727-8X, and 727-9X instead of the MAX-7, MAX-8, and MAX-9.

A number of chances have been made to the original fuel-consuming 727. The max, fully-loaded range has been increased to 7600km due to the much more efficient engines. The weight of the aircraft has also been reduced on the -8X and -9X versions, which are slighty more expensive. Length of the -2X has stayed the same, but the window/e.exit arrangement on the other hand, has changed to accomodate more passengers and increase safety. Evacuation speed has been increased by 48.8%25 because of the new emergency exit arragement, and the aircraft can now carry 190 in two-class configuration and 230 in one-class configuration [incl. crew]. The engines have been replaced with the more efficient PW4000E, and wings have also been equipped with Scimitar winglets. Another notable change is the removal of eyebrows on the cockpit, and the addition of a complete GLASS cockpit, along with the newest Boeing Sky Interior with mood lighting and button-adjust window brightness, just like the Dreamliner.

The engines have been in development since January 1, 2016. The base for the engines is the PW4000. The visual look will not be changed. However, the interiors of the engine will be significantly improved. Engine %2322 shell and vertical stabilizer will require no visual change whatsoever because of the compact size of a deriative of the PW4000E called PW4000ET, the T standing for Tail. The engines will be twice as efficient as the PW4000.