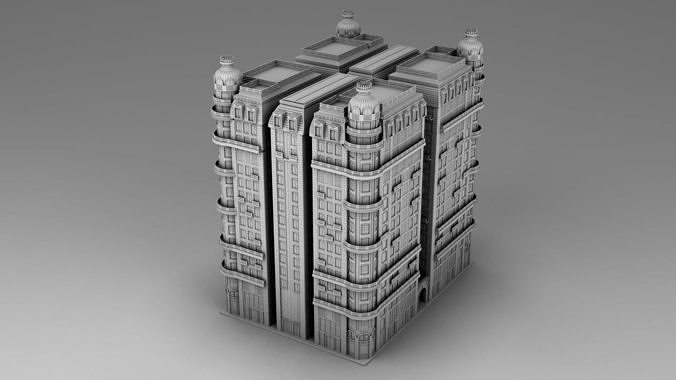 //MADE FOR PRINTING ONLY//

MODEL TEAM-consists of 12 modules that can be connected

It is desirable to print on the stroke value 0.1, but for greater detail 0.05 mk

"Ansonia The Ansonia is an 18-story building located on the upper West Side, at 2109 Broadway, between 73rd and 74th Streets. It was built in 1899 -1904.. on a steel frame, in the style of Beaux Arts, commissioned by multi-millionaire William Earle Dodge Stokes as the largest long-term hotel in Manhattan (residential hotel) with luxury multi-room apartments. The architect is Paul E. Duboy. The building was richly decorated with complex cast metal ornaments: many of them were copper, and later during the 2nd World War they were removed and melted down for military use.

The Ansonia was the first air-conditioned hotel in New York. In addition to the usual restaurants for a large hotel, each floor had a kitchen and meals could be ordered directly to the rooms.

An unusual feature of the building was a small farm built on its roof (next to the owner's private apartments!) – for the purpose of its at least partial food self-sufficiency. It contained 6 goats, about 500 chickens, ducks, and a small bear (!). Every day, each guest received by messenger, free of charge, 3 fresh eggs; if there was a surplus, they were sold at a cheap price to the residents of the surrounding neighborhoods. Another feature of the building was a special elevator for cattle, with the help of which dairy cows were raised to the farm on the roof. All this subsidiary farming, however, was not very pleasant to the fathers of the city, and already in 1907 the roof farm was closed by order of the Ministry of Health. By the mid-20th century, most of the huge apartments were divided into a larger number of more compact rooms for middle-class guests.

In the 1960s, in the wake of fashionable ideas about architectural renewal of cities, at one time the question was raised about the demolition of Ansonia; however, its residents and fans (many of them artists and musicians) defended the building, and since 1980 It is listed on the U.S. National Register of Historic Places. During its history, it has appeared in many films, and guests of the hotel have been many celebrities, including writers, stars of cinema, theater, music and sports. In 1992, the building was converted into a condominium of 430 apartments; by the second half of the 2000s, however, many of the former tenants had moved out, and new wealthy buyers re-combined several of the former apartments, recreating the original design and interiors of the luxury hotel."

if you liked the model, and if it is not difficult for you , please leave a review))) thank you very much for your purchase!))))