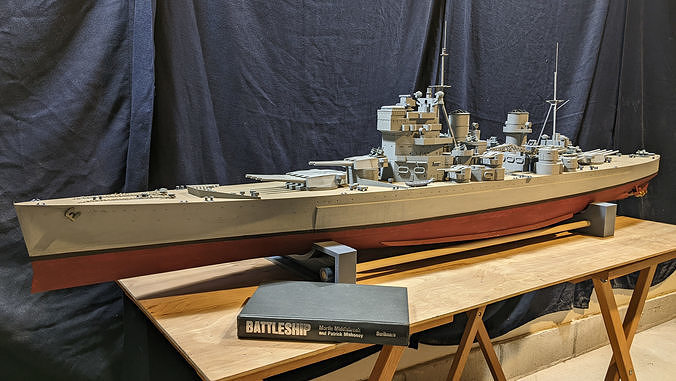 The Royal Navy’s HMS King George V was the lead ship of five King George V-class (KGV) battleships used during WWII. Her sister ships included the HMS Prince of Wales, HMS Duke of York, HMS Anson and HMS Howe. Her most notable action was the pursuit of Nazi Germany’s DKM Bismarck after it had sunk the HMS Hood and damaged the HMS Prince of Wales in the Battle of the Denmark Strait on May 24, 1941. The most notable characteristics of the KGV Class battle ships were the quad/dual forward turrets housing 14 inch guns, thick torpedo belt armor, aircraft cranes/catapult located amidships and crowded auxiliary boat stowage on the roof of the rear superstructure.

This model can be built as the HMS King George V or HMS Prince of Wales as they appeared in 1941.