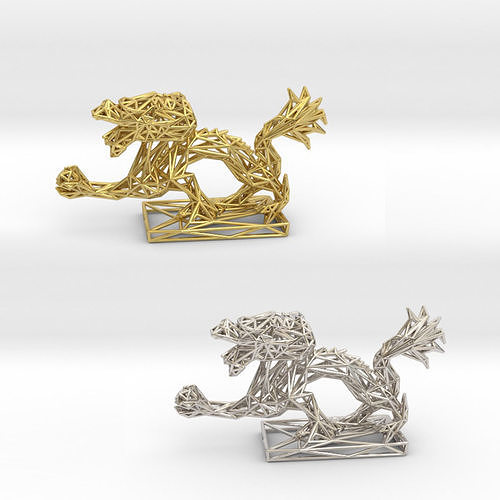 Chinese dragon, also known as East Asian dragon or Long, are legendary creatures in Chinese mythology, Chinese folklore, and East Asian culture at large. Chinese dragons have many animal-like forms such as turtles and fish, but are most commonly depicted as snake-like with four legs. They traditionally symbolize potent and auspicious powers, particularly control over water, rainfall, typhoons, and floods. The dragon is also a symbol of power, strength, and good luck for people who are worthy of it in East Asian culture. During the days of Imperial China, the Emperor of China usually used the dragon as a symbol of his imperial strength and power.[1]

Dragon stone relief, between flights of steps in the Forbidden City.

Portrait of the Yongle Emperor wearing a dragon robe In Chinese culture, excellent and outstanding people are compared to a dragon, while incapable people with no achievements are compared to other, disesteemed creatures, such as a worm. A number of Chinese proverbs and idioms feature references to a dragon, such as Hoping one's son will become a dragon

A dragon is a large, serpentine legendary creature that appears in the folklore of many cultures around the world. Beliefs about dragons vary drastically by region, but dragons in western cultures since the High Middle Ages have often been depicted as winged, horned, four-legged, and capable of breathing fire. Dragons in eastern cultures are usually depicted as wingless, four-legged, serpentine creatures with above-average intelligence.

The earliest attested reports of draconic creatures resemble giant snakes. Draconic creatures are first described in the mythologies of the ancient Near East and appear in ancient Mesopotamian art and literature. Stories about storm-gods slaying giant serpents occur throughout nearly all Indo-European and Near Eastern mythologies. Famous prototypical draconic creatures include the mušḫuššu of ancient Mesopotamia; Apep in Egyptian mythology; Vṛtra in the Rigveda; the Leviathan in the Hebrew Bible; Python, Ladon, Wyvern, and the Lernaean Hydra in Greek mythology; Jörmungandr, Níðhöggr, and Fafnir in Norse mythology; and the dragon from Beowulf.

The popular western image of a dragon as winged, four-legged, and capable of breathing fire is an invention of the High Middle Ages, based on a conflation of earlier dragons from different traditions, and of inaccurate scribal drawings of snakes. In western cultures, dragons are portrayed as monsters to be tamed or overcome, usually by saints or culture heroes, as in the popular legend of Saint George and the Dragon. They are often said to have ravenous appetites and to live in caves, where they hoard treasure. These dragons appear frequently in western fantasy literature, including The Hobbit by J. R. R. Tolkien, the Harry Potter series by J. K. Rowling, and A Song of Ice and Fire by George R. R. Martin.

The word dragon has also come to be applied to the Chinese lung (traditional 龍, simplified 龙, Pinyin long), which are associated with good fortune and are thought to have power over rain. Dragons and their associations with rain are the source of the Chinese customs of dragon dancing and dragon boat racing. Many East Asian deities and demigods have dragons as their personal mounts or companions. Dragons were also identified with the Emperor of China, who, during later Chinese imperial history, was the only one permitted to have dragons on his house, clothing, or personal articles.

Commonalities between dragons traits are often a hybridization of avian, feline, and reptilian features, and may include: snakelike features, reptilian scaly skin, four legs with three or four toes on each, spinal nodes running down the back, a tail, and a serrated jaw with rows of teeth. Several modern scholars believe huge extinct or migrating crocodiles bear the closest resemblance, especially when encountered in forested or swampy areas, and are most likely the template of modern dragon imagery.[1][2] This also fits with the ancient words 'Draco' and 'Drakon', meaning 'large serpent' or 'sea serpen

to Dragon With Icosahedron