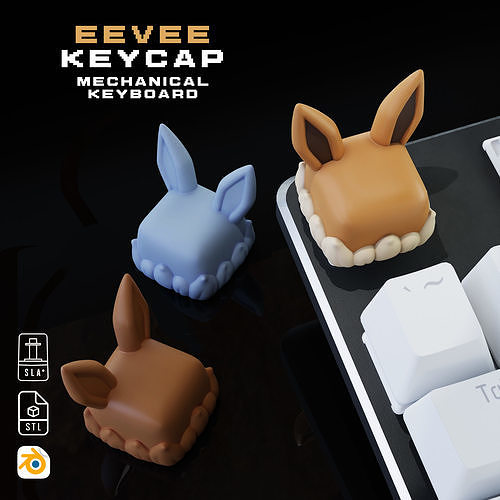 there are 2 versions of keycap.

The keycap complete with the merge stem.

The hollow keycap with separate stem, you can scale the stem to fit your keyboard, if so, you need to join the new resized stem with the hollow keycap before printing or you want to print them separately.

This is the most optimal way I found so that the keys can be compatible with a wide variety of keyboards and you have the option to modify them so that they are functional for you.

can only be used for personal, non-commercial use.

Eevee (イーブイ, Ībui, /ˈiːviː/ EE-vee) is a Pokémon species in Nintendo and Game Freak's Pokémon franchise. Created by Ken Sugimori, it first appeared in the video games Pokémon Red and Blue. It has later appeared in various merchandise, spinoff titles, and animated and printed adaptations of the franchise. It would become the game mascot and starter Pokémon for Pokémon: Let's Go, Eevee!.

Known as the Evolution Pokémon in the games and the anime,[3] Eevee has an unstable genetic code, which allows it to evolve into one of eight different Pokémon, informally known as Eeveelutions, depending on the situation. The first three of these evolutions, Vaporeon, Jolteon, and Flareon, were introduced alongside Eevee in Pokémon Red and Blue. Five more evolutions have since been introduced in Pokémon games: Espeon, Umbreon, Leafeon, Glaceon, and Sylveon.