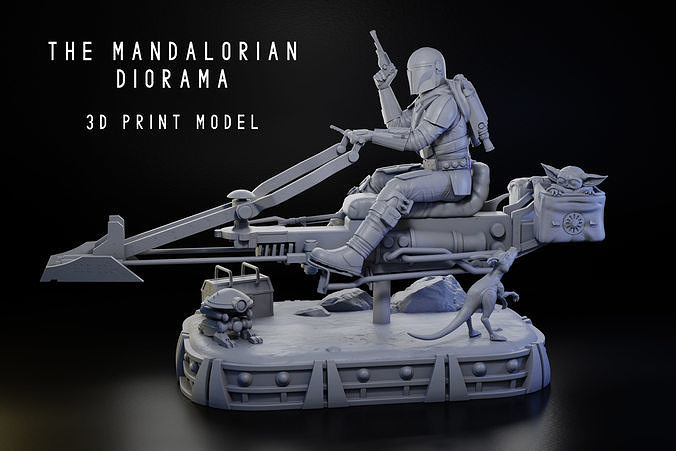 now the mandalorian have more cuts for optimize and better print. cuts in the arms right and left and lower leg right and left too, adding to the initial cuts of the head, torso and legs.

a new high quality diorama for 3D printing that we added to the hiko collection.

This time the 1/6 scale Mandalorian diorama

A 3D diorama with a great finish and details, designed and made especially to be printed in 3D.

each figure is divided and optimized for a comfortable print with very little supports.

Elements such as the pit droid, toolbox and scurrier were added to give a better narrative to the diorama (droid and scurrier bring their version in one piece to be printed)

Each figure has its order of perfectly understandable files to arrive and print, images are also attached.

I hope you like this beautiful diorama, and enjoy the printing

The Mandalorian is an American space Western streaming television series created by Jon Favreau for Disney+. It premiered with the service's launch in November 2019, and is the first live-action series in the Star Wars franchise. It begins five years after the events of Return of the Jedi (1983) and stars Pedro Pascal as the title character, a lone bounty hunter who is hired to retrieve The Child.

Star Wars creator George Lucas began development on a live-action Star Wars television series by 2009, but the project was deemed too expensive to produce. After he sold Lucasfilm to Disney in October 2012, work on a new Star Wars series began for Disney+. Favreau signed on in March 2018, serving as writer and showrunner. He executive produces alongside Dave Filoni, Kathleen Kennedy, and Colin Wilson. The series' title was announced in October 2018 with the start of filming at Manhattan Beach Studios in California. Visual effects company Industrial Light & Magic developed the StageCraft technology for the series, using virtual sets and a 360-degree video wall to create the series' environments. This has since been adopted by other film and television productions.

to The Mandalorian Diorama 1-6 Scale -