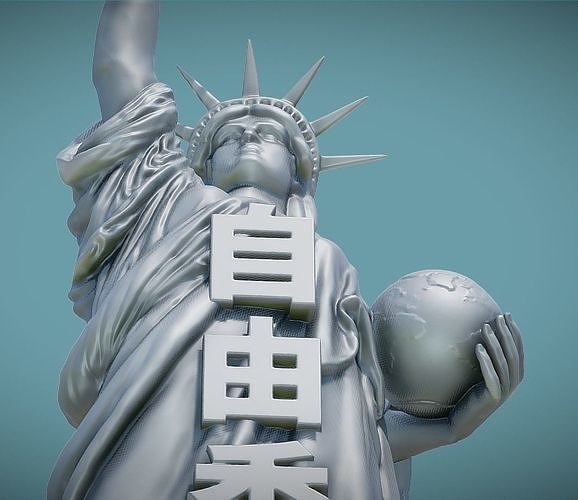 The Goddess of Liberty is a great symbol that belongs not only to the United States, but to all human beings in the world who love freedom, democracy, and the rule of law, so I let her protect the earth with her left hand and take up arms with her right hand to defend the basic human rights of freedom, citizenship, and the rule of law.

Greedy politicians and businessmen are the devil's favorites, making it impossible for us to fight for the basic interests of freedom, democracy, and the rule of law by peaceful means, not to mention a friendly and loving future of mutual assistance.

There is no room for negotiation with the devil, and to negotiate with the devil means that we have lost the war to defend the war; if the basic victory can only be obtained by winning the war, then we have to fight, and since the devil, who is evil and ubiquitous, will not disappear automatically, we should rise up to fight against it and destroy it completely.

Yes, if the lighthouse of the Goddess of Liberty can not destroy the deprivation of freedom to take away the evil, then replaced by a gun to defend the good to us and our peers, it is only natural for the responsibility to do.

Nowadays, Hong Kong is a communist Hong Kong, no longer a free Hong Kong with high civic quality that we are familiar with, but a communist Hong Kong that even Hong Kong people do not agree with, so I have removed the Hong Kong emblem and kept the four Chinese characters of Free Hong Kong Hong Kong Freedom. When free, peaceful, rational, and non-violent means are not enough to fight for freedom, democracy, rule of law, and human rights from an authoritarian and dictatorial government, then it is a logical and proper responsibility to replace the lighthouse of Lady Liberty with a gun and fight to defend the goodness of us and the next generation.

Yes, if the lighthouse of Lady Liberty cannot destroy the evil men who deprive us of our freedom, let it be replaced by a gun to take back our freedom by force. The Chinese Communist Party is a world public nuisance and a public enemy of mankind. --Yes, that is my starting point for changing Lady Liberty.